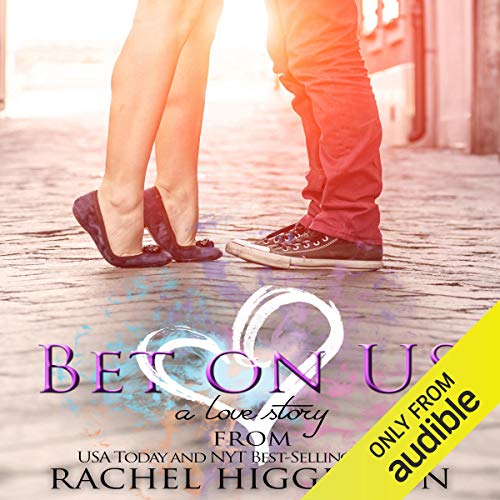 By: Rachel Higginson
Narrated by: Christine Marshall
Try for £0.00

As if getting cheated on and dumped weren't enough, her roommate suddenly disappears after stealing Ellie's identity and half her furniture. Now Fin Hunter insists Ellie owes him 7,000 dollars and he won't leave her alone until he collects it. Determined to keep her overbearing family out of her life, Ellie agrees to work for Fin's illegal online poker operation. He's given her six weeks to pay off the debt.

And to make matters worse, Fin is more than Ellie bargained for. He's too bossy and too sexy for his own good. He's everything dangerous she knows she should stay away from. But Fin won't let Ellie stay away. He wants his money and he wants her. At the end of those six weeks, Ellie will have to pay the mistaken debt, or bet that her feelings for Fin will be worth more than the money.

What listeners say about Bet on Us

Story okay, narration took away from it.

I really wanted to like the book as I loved The Opposite of You. However, I couldn't get through this one. The narrator sounded like a "mature" person who was making her voice sound extra high-pitched in an attempt to come across like a college student (Hello fellow hip kids!"). As a result, there were weird emphasis points on words that were completing irritating at best and caused a lot of eye-rolling on my end. The narration was so poorly done and miscast that I couldn't make it through the book and finally gave up. I just couldn't take another second of it.
Beyond that, the plot was okay as much as I could make it through. The main character wasn't particularly likable as she was naive and whiny. Finn was given a back-story straight out of a textbook "how to create a hero" guide.
Side note: Malibu and Diet Coke is NOT the "ultimate girl drink" as it's nasty. Come on author, give women credit for not being vapid and silly.

I LOVED Love & Decay so I was excited to try this. I think I should have read it first. The narrator is ok, but she sounds like a 40yr old business professional reading a story about loud. Then at least 4 times I thought they were inducing a new characters voice because the voice changed so much when she, I guess, took a break.

It takes a lot for me to abandon a book without finishing, but only a spectacularly terrible book can make me completely give up after only one chapter. Even if I could stand to listen to one more minute of Christine Marshall’s high-pitched, whiny, breathy voice—which I absolutely could NOT—the characters were pathetic! The main girl was so naive and stupid that, despite holding in her hand a note from her roommate (Tara) saying that Tara had a gambling addiction and had sold all Ellie’s furniture to pay for “rehab” (which Ellie was stupid enough to believe), it took her almost the entire conversation with the angry guy who had burst into her apartment to figure out that her roommate had stolen her identity to play online poker and subsequently lost the $7,000 the guy was insisting she owed him, although I don’t think it actually counts as identity theft if all the roommate did was use Ellie’s name and not her social security number. That brings me to how stupid Fin is. He cannot legally enforce a debt that was agreed to by someone’s typing mere initials on an online contract. How has he NEVER CONSIDERED THE POSSIBILITY that a player might not use his or her real name? I seriously wanted to reach into that conversation and slap both of them upside their heads.

great book. I really enjoyed this book. I look forward to reading more from this author.

Just couldn't listen to this

I tried to make it more than an hour into this book but the heroine is stupid and the narration is beyond horrible. I will say it again, this narrator is horrible and if this wasn't included in the Audible Escape I would be upset to have wasted a credit. When the narration is this bad I sometimes just go read the book but in this case, the female heroine is too stupid for air and I refuse to waste any more time with her. DONT WASTE A SECOND ON THIS BOOK

The story was a cute romance, and I actually liked the characters. I would have preferred to read this book though, the narrator didn't really fit the book for me. Her voice made me think the character was much older than her 21 years so it kept throwing me off.

really enjoyed this one.

took me awhile to get invested in the story as I've listened to a bunch of sub-par romances lately, but I'm really glad I stuck with this one. loved the characters and their chemistry. sweet, fun story!

The story was cute. Not quite realistic but fun to listen to and filled with sweet romance that wasn’t just sex.

However, the narrators voice is a bit grating. She reads more like she is reading a children’s book than a romance.


Bet on Us by Rachel Higginson is a angsty and comedic college romance story that I absolutely adore. Fin Hunter has a cocky attitude that I could not get enough of. He is a sexy big-hearted hero that I've officially added into my list of All Time Favorite Book Boyfriends. Ellie is also one of my favorite heroines , even though her stubbornness did frustrate me at times. Ellie's quick wit and sarcasm were hilarious additions to this story, especially when her comments were directed at her brothers. I enjoyed everything about these characters and this story. I've already one-clicked both the Kindle edition and audible add-on for Bet on Me, the second standalone in this series.

I couldn't stand the 70 yr old narrator or the rediculous story. Two chapters in and I had to quit. Don't waste your time...