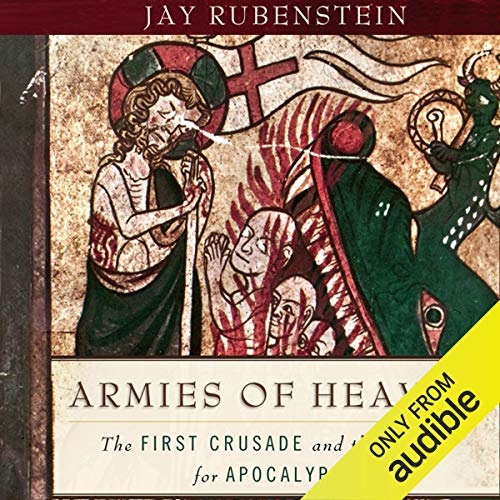 By: Jay Rubenstein
Narrated by: Brian Holsopple
Try for £0.00

At Moson, the river Danube ran red with blood. At Antioch, the Crusaders, their saddles freshly decorated with sawed-off heads, indiscriminately clogged the streets with the bodies of eastern Christians and Turks. At Marra, they cooked children on spits and ate them. By the time the Crusaders reached Jerusalem, their quest and their violence had become distinctly otherworldly: blood literally ran shin-deep through the streets as the Crusaders overran the sacred city. Beginning in 1095 and culminating four bloody years later, the First Crusade represented a new kind of warfare: holy, unrestrained, and apocalyptic.

In Armies of Heaven, medieval historian Jay Rubenstein tells the story of this cataclysmic event through the eyes of those who witnessed it, emphasizing the fundamental role that apocalyptic thought played in motivating the Crusaders. A thrilling work of military and religious history, Armies of Heaven will revolutionize our understanding of the Crusades.

"An engaging, cautionary account emphasizing the consequences of untrammeled irrationalism." ( Kirkus Reviews)
"[A] rich harvest of legends and writings from the period, often apocalyptic in nature, that give us a keener insight into the minds of those who lived these tumultuous years. Rubenstein offers up a heady mix of soldiers and prophets, militants and supplicants, weaving it all into a wonderfully readable account that puts flesh on the story. A satisfying and highly recommended read in every respect." ( Publishers Weekly)
"The most fascinating and readable book about the Crusades I have read. Jay Rubenstein gets into the heads of the Crusaders in a way no other book has. And it’s a page-turner." (Terry Jones, director of Monty Python and the Holy Grail, Monty Python’s Life of Brian, and Monty Python’s The Meaning of Life, and author of Terry Jones’ Medieval Lives and Who Murdered Chaucer: A Medieval History)

What listeners say about Armies of Heaven

most comprehensive so far

A good tale of an amazing event, the journey of a massive army across 2000 miles. Slightly bogged down at times, but this barely detracts from capturing the spirit of the first crusade.

Jay Rubenstein brings medieval characters and battles to life giving me both a deeper understanding of the subject but also a greater love for the topic. Written with both detail and clarity, I appreciate that he can make himself understandable to an amateur history buff like me.

Long, too much moment-to-moment detail, dull

I was hoping for more summary and historical analysis and perspective. This books is, rather, a lot of moment-to-moment detail about battles, minor nobles, and many names of minor historical figures. If you are a crusades enthusiast, you might like it.