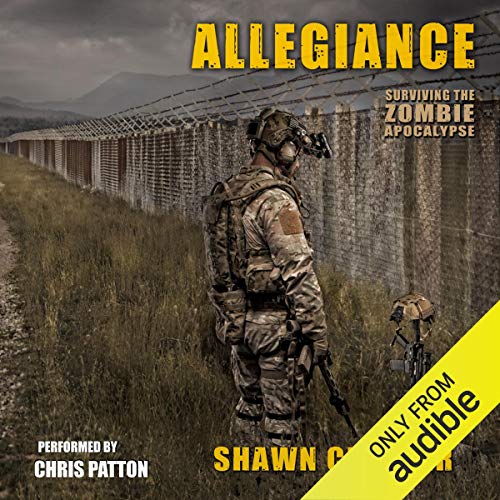 By: Shawn Chesser
Narrated by: Chris Patton
Try for £0.00

Allegiance picks up two days after A Pound of Flesh left off.

Outbreak - Day 15. With an estimated 99 percent of the United States' population having already succumbed to the rapidly spreading Omega virus, and countries and cities worldwide teeming with the dead, the struggle to survive the zombie apocalypse continues unabated in the high desert of Colorado.

Having just returned from a hastily thrown together secret mission that saw Robert Christian - the self-proclaimed President of his "New America" - snatched from his mountain redoubt and delivered kicking and screaming to the justice awaiting him at Schriever Air Force Base, Cade Grayson, father, husband, and Delta Force operator, is horrified to learn that during his absence the base had been compromised, putting his family in harm's way.

Its inhabitants still reeling from Pug's act of terror, and recently rocked by an undead outbreak inside the wire, Schriever no longer seems an island of safety surrounded by a sea of dead, but more like a shadowy prison, danger lurking within its walls.

So, with the Z-infested cities of Denver and Aurora to the north and 100,000 flesh eaters inhabiting Pueblo to the south, and all hope of a cure for Omega dwindling faster than the world's population, Cade uses a mandated two-day stand down to fully weigh out his options.

With each passing day, he finds himself warming to Brook's stance that they pull up stakes and put the acres of squat buildings and fenced-in concrete in their rearview mirror for good.

With his allegiance walking a tightrope between family and flag, will Cade appease Brook and move the family to Logan Winter's compound outside of Eden, Utah? Or will he lobby her to allow the family to stay at Schriever, so that his Delta Team - still recovering from the recent loss of soft-spoken Sergeant Darwin Maddox and the Unit's longtime commander General Mike Desantos - will not find themselves undermanned and outgunned should another important mission crop up?

Or will the talented Mister Murphy - of Murphy's Law fame - throw a monkey wrench into the equation and alter the best laid plans of mice and men?

What listeners say about Allegiance

Another good outting for established characters.

What made the experience of listening to Allegiance the most enjoyable?

No spoilers but characters are suffering the onslaught of the dead.

The no holds bared story.

What does Chris Patton bring to the story that you wouldn’t experience if you had only read the book?

He has made this series his own.

I did, surprise! When characters are lost to the ravenous dead. I think the author shows courage and conviction here.

A shaky start has lead to a solid series.

great book but way to short

I really like these books but they are about half the length of a normal zombie apocalypse book, I suppose it's an easy way of getting more money?

Ok, so I started a new job the involves a one hour commute each way. The only thing that's keeping me sane and calm during commute hours is listening to Shawn Chesser"s Surviving The Zombie Apocolypse Series on audio. I usually steer clear of audio books, but darn it, this is an excellent series to read and listen to, even stuck, stopped still during a 45 min parking lot event on the highway. Chesser is in my top 3 author list now. All three is in first place, because I can't pick. Thank you Shawn for producing an awesome series. 😄

love these books. my only complaint is specific details/topics could use more research.. ex. bodies flying 5 feet when getting shot by 9mm. or shotguns.
there were a few others.. but those are the typical inaccurate parts to almost any action, war, zombie book or story.
other than that. . . great series. now to start the next book. :)

I found the first book in this series hard to get into. Each subsequent book just seems to get better and better! I'm totally addicted and find myself sneaking any spare moment listening. Brilliant!!

The Females are way too needy and reliant

the Females are way too weak and helpless...
why do the men seem to be the only ones with any fortitude?!
yet, it's still worth a listen.

captivating story, kept me enthralled for the entire duration of the book, left me craving the next installment in the series.

Huh! all the characters sound the same. "if God wishes" and F bombs, nothing original

So as a veteran most apocalypse books that are military based are pretty bad using poor terminology or downright wrong so I typically take it with a grain of salt mr.Chesser does a good job of not over simplifying things for the civilian populace so it really is an enjoyable listen/read.

this is an excellent series of books that keeps getting better . top shelf story and narration

Alright story,Alright narrator,But the story just seems to drag on.Gets very inattentive and just boreing.I wont be buying anymore from the series.I will be saving my time and money.