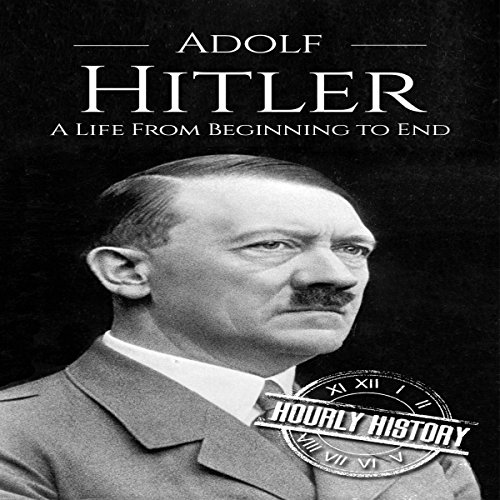 Adolf Hitler: A Life From Beginning to End

The most notorious man in history, Adolf Hitler, is best known for having perpetrated crimes against humanity over the six-year course of World War II. His brutal extermination policies are responsible for the deaths of close to 30 million people he considered inferior, and added to that, the military casualties suffered by all parties, yields a grand total of approximately 60 million people dead by the end of the war. That number equates to 3% of the world's population at the time. But, who was this man? What made him into the monster he became? Can his childhood explain the formation of such a brutal dictator?

This audiobook tells the story of the man behind the monster in concise yet thorough detail. Hitler's childhood, his early life and dreams of becoming an artist, his military career in World War I, his subsequent rise to power as the leader of the Nazi Party, and his rule during the war are presented in succinct, compelling detail packed with historical information that makes for an entertaining and informative read.

What listeners say about Adolf Hitler: A Life From Beginning to End

great book. was happy I bought it, you can really learn something and it's only 1hr.

Not giving the right perspective about Hitler

“Power is the end”

I just finished hearing the audiobook “Hitler, a Life from Beginning to End” from the series “Hourly History”, narrated by Stephen Paul Aulridge Jr. You might say that it is impossible to know the life of Hitler just in one hour, especially after the massive biographies of Bullock and Feist. That is not the proposal of the series, of course, but you will be able to know the very facts of the life of a man that was named “the personification of evil” and made the power an end itself. The first chapters discuss about the origins of Hitler, his family and his own name’s modification. The relations of Hitler with her mother and nephew, including her tragic death. The years of Hitler during the First World War and her disillusions after the defeat in November, 1918. The political indictment of the political class by the defeat in the battlefield (the famous “stab in the back” legend) and the attribution to the “Jews of the world” as the “enemy behind”, are referenced in the audiobook. The ascension of Hitler, from spy to the leadership of the tiny Nazi party (by the transformation of the old workers party of the initial Weimar days) and, finally, the conquest of the power in the national elections, using the image and the powerful figure Hindenburg as President of Germany. After the death of the Marshal in January of 1933, Hitler managed to assume the prime-chancellorship and immediately open the doors to his own party controls the political and administrative machine of the state. The establishment of absolute state, controlling the minor aspects of the life of the citizen and conducting the German society to believe that the only way out of its economic situation was through the revenge of the “diktat” of Versailles, liberating the nation from the military and economic limitations upon her. There is no detail of the battles and campaigns of the Second World War, of course and it is not necessary to understand the life of Adolf Hitler in just one hour. You will know about the first shot against Poland and the last Russian shots against Germany inside Berlin. The historical records of Hitler’s life put alive in one hour will foment our interests to look for more and possibly, you’ll be encouraged to face the books of Feist or Bullock indeed. Take one hour, hear the main events in the life of one of the most enigmatic historical figure of the XX Century, liking him or not.