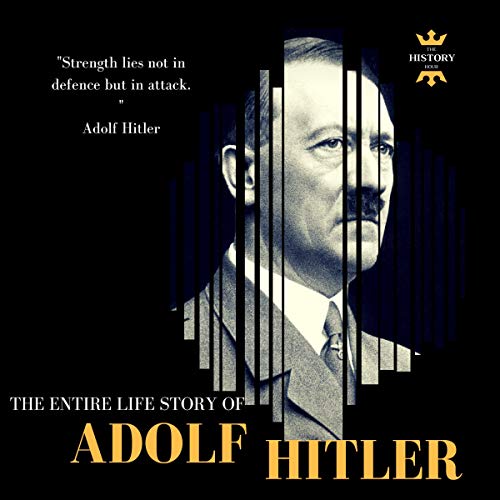 By: The History Hour
Narrated by: Jerry Beebe

Adolf Hitler was a German politician, demagogue, and Pan-German revolutionary who was the leader of the Nazi Party, chancellor of Germany, and führer ("leader") of Nazi Germany. As dictator, Hitler initiated World War II in Europe with the invasion of Poland and was central to the Holocaust.

Inside, you’ll hear about:

Hitler gained popular support by attacking the Treaty of Versailles and promoting Pan-Germanism, anti-Semitism, and anti-communism with charismatic oratory and Nazi propaganda. He frequently denounced international capitalism and communism as being part of a Jewish conspiracy.

What listeners say about Adolf Hitler

I found this book to be a true eye-opener to the utter horrors that surrounded this man and the awful things he brought to the people around him.

It Provided Me Required Information

This book provides almost all required information about Hitler in very short manner. I like the changes of explaining of information in a story telling way. I really enjoyed the listening to this book. Thank you, author, for such a good description yet full information book.

That such an idealist could be so pragmatic simply makes him more inspiring to me. The Declaration of Independence remains the most inspiring political ideal ever penned.

This book is fantastic from a bibliographical prospective. Extremely detailed. A person really passionate about Jefferson would like it!

It's the material that splits ordinary beings from deep thinkers, from Geniuses. I principally like that this product. The price bearing in mind the quantity and quality for this product is the key selling point and is really un-matchable with anything else out there.

This book was well over a thousand pages and probably would be very intimidating in its bound edition. Reading this book took a bit longer than usual as I had to stop and research via other sources word, phrases and geographical locations. This is one of the limitations of Listening a historical or nonfiction book where you cannot easily flip to an index, glossary or map renditions.

People asked me why would I listen a book about such a monstrous character in history and my response was as simple as “this is history” and it relates to events before and after World War II and it also impacted on me personally when my time in the Army was extended due to the Berlin Wall crisis in 1961.

Good analysis on methodology of madman's rise to power. He was not necessarily a genius but an opportunist taking advantage of chaotic times filling the power vacuum.

Great works. Both her books are the best if you wanna know what really happened during that time.

Adolf Hitler was a German politician, demagogue, and Pan-German revolutionary who was the leader of the Nazi Party, chancellor of Germany, and führer ("leader") of Nazi Germany. As dictator, Hitler initiated World War II in Europe with the invasion of Poland and was central to the Holocaust.

Being a history buff I really liked this book. It put together the story of Hitler in a very easy to comprehend. I have recommended it to friends.

I found this to be a remarkable accounting of Hitl

I found this to be a remarkable accounting of Hitler throughout his life. It was interesting and horrific all at once. I would recommend to those who want a deeper look into his life.

It really is the definitive biography.

I’m only about a quarter way through the book but so far it’s excellent. The subject matter is of course very sensitive but so far I think the author has handled it very delicately which I appreciate.

I found this to be a remarkable accounting of Hitler throughout his life. It was interesting and horrific all at once. I would recommend to those who want a deeper look into his life.

I suppose it should have been obvious that this would stink when a book purporting to tell "The Entire Life Story" of Adolf Hitler was only 92 minutes long.

As one might imagine, there is no context, no corroboration or anything else of any value in this work. Making it even worse is that the narrator can't even correctly pronounce the British names, much less Dutch, French or German.

This work should be avoided, particularly as a primer or first examination of Hitler's dark and convoluted life. There is enough misinformation here to put any Middle School or High School student well on the way to failing his or her history class.