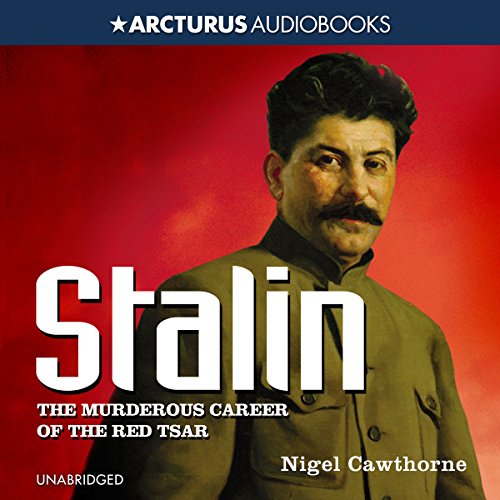 Stalin: The Murderous Career of the Red Tsar

By: Nigel Cawthorne
Narrated by: Richard Trinder
Try for £0.00

"Death is the solution to all problems. No man – no problem." (Joseph Stalin)

Worshipped by the Russians as a great leader, Stalin was one of modern history's greatest tyrants, rivalling Hitler, Mao Zedong and Pol Pot. But he probably had more blood on his hands than any of them.

Born Josef Dzhugashvili in Gori, Georgia in 1879, Stalin studied to be a priest while secretly reading the works of Karl Marx. Politics soon became his religion and, under his ruthless rule, up to 60 million people perished. Peasants who resisted Stalin's policy of collectivisation were denounced as Kulaks, arrested and shot, exiled or worked to death in his ever-expanding network of concentration camps, the Gulag. Nobody was safe, not even his friends, his family or his political allies. This is the story of a man who never let up for a second in his pursuit of absolute power.

What listeners say about Stalin: The Murderous Career of the Red Tsar