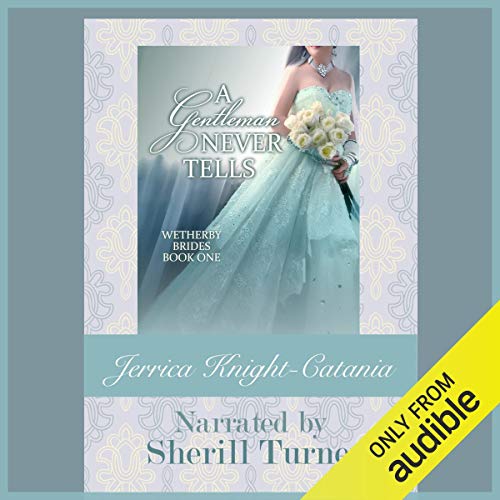 By: Jerrica Knight-Catania
Narrated by: Sherill Turner
Try for £0.00

Benjamin Wetherby, Earl of Glastonbury and heir to the Marquessate of Eastleigh, has just received an urgent letter from home. His father is dying and he must return to England at once. Benjamin is a man bound by honor and duty, to both his country and his family. So, despite his reservations, he leaves his life in New York City behind so he may find a wife and assume his role as the Marquess of Eastleigh.

Miss Phoebe Blake is finally out of mourning for her father, and just in time. She and her mother could be days away from being carted off to debtors' prison, so Phoebe returns to society with the intent and determination to secure a rich husband.

Sparks fly when Benjamin and Phoebe meet, and it appears they have both found just what they are looking for. But will a dark secret keep them from finding their happily ever after?

What listeners say about A Gentleman Never Tells

In the end I had to finish reading the story as after about 4 chapters i couldn't stand the squeaky voice and mispronunciations. I shall certainly avoid this narrator in future.

Great start to this series!

I found this book on Amazon for free and since I could purchase the audio for an excellent price, decided to give it a read. I had never heard of the author, but this is the first book in the Whetherby Brides series and I normally enjoy sagas a great deal. I am so glad I found A Gentleman Never Tells. I thoroughly enjoyed reading/listening to it.

Phoebe Blake is a damsel in distress. Her father died a year ago, and she and her mother are on the verge of losing it all. They barely have enough money for food. She knows she must find a man to marry and quickly, but she also longs for a love match.

Benjamin Whetherby, the Earl of Glastonbury, suffers from a huge case of guilt for wounding a man in a duel, and this man succumbs to fever days after. Guilt-ridden, he leaves hearth and home and goes to America, where he spends a year. When he learns his father is ill, he rushes back to be at his side. The Marquess wants to see his heir married before he dies, so Benjamin goes to London to find a wife.

When Benjamin meets Phoebe at a ball, he is immediately smitten, and wants to pursue her, intent on making her his bride. The next day he decides to visit her, but he must pay a visit to the widow of the man he killed first. When he arrives at the baroness’s residence, he is greeted by none other than Phoebe.

Benjamin has a dilemma on his hands. Should he follow through with his plans to wed the lovely Phoebe, or will he allow guilt to drive them apart?

This is a sweet romance that’s unfolds gently. It is a boy meets girl, they get married and along comes baby story, but is not boring at all. The pacing is excellent and the many twists in this tale kept me listening well into the night to finish it.

While both characters have strong motivations to marry, the attraction is instant between them, so they actually choose each other because of this more than their external reasons for marrying. It is refreshing to read a story where, the couple truly likes each other from the beginning.

Phoebe is a great heroine. Even though she finds herself in a deplorable situation, she does not let it pull her into the darkness as it has her mother. While she is a waif character type, she has a touch of the spunky kid rolled in. Her ability to grab the brass ring is evident and had me liking her from the start.

Benjamin is a fantastic hero. While not completely without faults (he has a mistress at the start of the story, and he has a short fuse at times), he is an honorable man, determined to do the right thing. His desire to protect Phoebe’s innocence is commendable, and causes him great distress. His secrets eat at him, and then he becomes the keeper of Phoebe’s mother’s secrets as well. Even though these secrets could very well tear him apart from the woman he loves, he will not break faith with the baroness.

While there is very little internal conflict in Phoebe—most of hers is external—Benjamin on the other hand, has a great deal of both. He has easily definable goals and strong motivation, which makes this book a great read.

Since I listened to the audio version of A Gentleman Never Tells, I want to mention the narration. Sherrill Turner reads with an abundance of feeling, getting the emotions the characters feel across to me. However, she needs to work on her male voices. Her voice is a bit high-pitched, so I’m sure that makes it more difficult. Even with this issue, I enjoyed her narration and look forward to listening to the other books in this series.

If you enjoy a tender romance with plenty of plot twists and turns, then you will enjoy this lovely tale of two amazing characters, finding their happy ending. I can’t wait to read/listen to the next book in this great series. I’m sure I will enjoy them as much as I did this one. Happy reading!

Would you try another book from Jerrica Knight-Catania and/or Sherill Turner?

Would you be willing to try another book from Jerrica Knight-Catania? Why or why not?

I wouldn't likely try another book by this author because there are too many books to spend my time hoping the next by this author is interesting. This book lacked any semblance of an engaging story.

A Gentleman Never Tells the Truth

I found Benjamin to be a 2-D coward, lol. And Miss Blake was entirely too forgiving.🙄 I dislike false conflict exceedingly. If the couple could straighten out their problems by simply sitting down together & talking things out then the strife between them is total nonsense. Give me a story w/external conflict where the couple has to work together to solve & that’s my cup of tea, lol!

The characters thoughts and actions were lame and annoying. There was no tension between characters, just patient dialog. It's difficult to conceive that the writer believed in her characters. Please make the writing real.

What a tale of misdirection and misunderstanding as several lies from more than one person leads to a challenging HEA for two kind people. I had some difficulty with the quickly petulant and punishing attitude of the heroine toward the hero when he "failed" to meet her standards. Narrator was fine.

This was a gentle easy to read book. Yes there were some nasty parts, but I found myself enjoying the love and romantic parts most of all.

The books starts out very dry and dull, that you would have thought Jane Austen herself wrote it. I'm not sure if the narrators voice helped in any of this, as it started out like nails on a chalk board. I did up the speed of the book, and grew accostomed to the narrators voice, that even after reading (listening) to the 2nd book i'm am not bothered by it.

I will admit our heroine is a bit on the bi-otch side of things, that it did make me wonder why our hero put up with her. While some parts of the book are pretty predictable, there were a few surprises as well.

The turn Pheobe and her mother's lives had taken since her father's death was hard to even comprehend. He'd been dead a year and they were fortunate not to be in the poor house. Pheobe has been using her wit, selling off their possessions that has value enough to help put food on their table. Her ultimate plan to save them was common among girls of the ton when facing abject poverty, marriage.
A wonderful story that will keep you smiling, mostly, and turning the pages as quickly as you can read. Enjoy!

His mistress writes so wifey blows up and wants to move to another bedroom 3 weeks into the marriage. Hubby explains he left her in America, hasn't had contact, and has no intention of future contact. When she finds a new protector she'll leave. He's not keeping a mistress. But yes paying for the sluts upkeep so he IS keeping her and she wrote of a miscarriage and she loves him. Hubby can't know what it was like for her to read these things (after creating a bunch of stupid reasons for opening a letter addressed to him). Sell the house she says. Hubby get mad tells her to mind her own business. Wifey counters that the (ex, unloved, never to be seen again) mistress is so her business.

My only thought aside from a quick calculation re the duration and angst level of banal stupidity is: where's the mistress supposed to go and what about his responsibility to see her safe out of his care? Huh.

In their month of meeting, courting and marriage hubby has been attentive, supportive, generous, loving, stable...perfect husband of the century in terms of her and their relationship.

Getting tired of thinking I've got a good read then finding out it's just more drivel.

FPC
Pass it on.

Cliches in every paragraph, predictable characters, and makes women sound foolish and prisoners of their emotions.