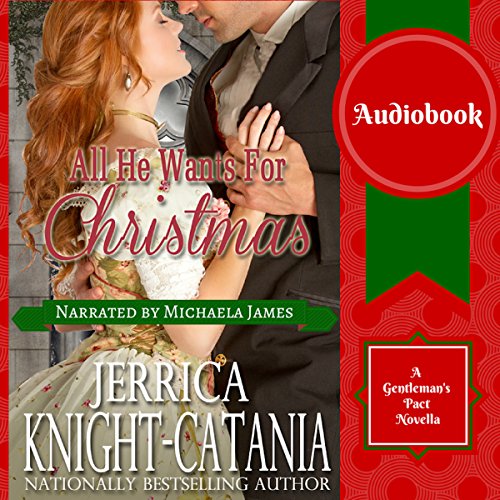 All He Wants for Christmas

By: Jerrica Knight-Catania
Narrated by: Michaela James
Try for £0.00

All He Wants for Christmas

After attending the funeral of an old school friend, six Regency gentlemen make a pact never to marry, convinced it will save them from meeting the same fate...

Rowan Findley can't imagine a fate worse than what his friend suffered at the hands of his mad wife, so he's made the decision to remain a bachelor for all eternity. That is, until Olivia walks into his cousin's drawing room for a Christmas party. Her fiery red hair and sweet demeanor remind him of a night so many years ago that he would never forget.

Olivia Edwards can't quite believe her eyes when Rowan Findley waltzes back into her life, as handsome and charming as ever. It's been almost seven years since she's seen him, and the secret she's been harboring all that time has her on edge whenever he's about. Yet she can't deny that she's still drawn to him, nor can she deny the desire she's kept hidden in her heart these many years.

What listeners say about All He Wants for Christmas

Barely okay for me..


Cute novella but maybe a little too religious for me. Between going to church and Olivia praying and thanking God for one thing after another I wouldn't have finished it if it had be very long.

It was about second chances. And the last part where her parents showing up was ridiculous. They disowned her for 7 years, actually threw her out of the house, not even caring that their daughter would be homeless, and all was forgiven in five seconds? Nope, not a good ending.

No sex and no swearing. Definitely rated G.

As to the narration: Meh! Neither good nor bad.

This ended up being such a sweet short story. 7 years ago, Rowan and Olivia shared a night of passion in a barn. What Rowan didn't know what that that encounter resulted in a child, Marcus. Now, after making a pact with his friends to stay a bachelor forever (as to avoid being killed by a wife), he finds that what he truly wants are this woman and his son. The story is HEA with no cliffhanger. I enjoyed Michaela James' narration. She did well distinguishing male voices from female voices.

Narrator needs to learn how to SLOW DOWN

The story was typical. Nothing really new about it. Everything went as you expected it to go from reading the description.

The worst is the narrator. It's like she was running a marathon. Gave me a headache by the end.

All I could think was how much better it would have been if it had been read by someone else. Someone like Mary Jane Wells. Someone who could make a predictable story more interesting.

and confusing. I was excited...but nothing sexy or romantic about this story. was disappointed. still looking for a good holiday romance.