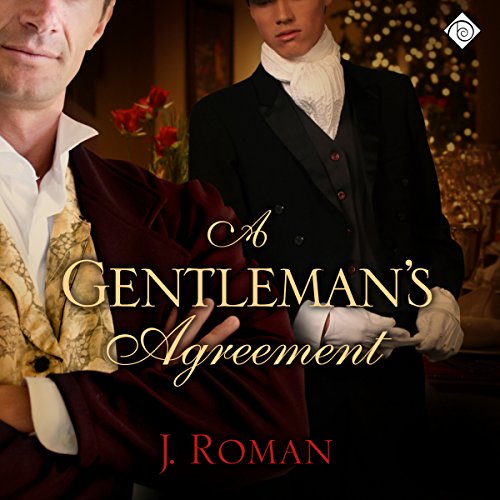 Thomas Derrik is about to have the worst Christmas of his life. Three days before the holiday, he finds out the father he doesn't get along with is arriving on Christmas Eve, his ex-lover and new brother-in-law will be staying at his estate until the New Year, and his beloved brother, Edmund, has died.

Luckily, Edmund's last holiday scheme may well save Thomas's Christmas: Henry Appleby, a young lord fresh from the Continent, has arranged to court Thomas. But the family tragedy and jealous exes may put an end to the romance before it begins.

What listeners say about A Gentleman's Agreement

What was one of the most memorable moments of A Gentleman's Agreement?

When Thomas learns that something he thought, wasn't true.

EVERYTHING. He is the best narrator there is right now, and I loved the aristocratic air he brought to this story in particular.

If you could rename A Gentleman's Agreement, what would you call it?

Why mess with perfection?

Thomas is considered a miscreant in his era, a place and time where attraction to the same sex is punishable by death. Not long ago he ended a relationship with his best friend of many years after learning the man had a man in every port, Thomas wasn’t as special to him as Thomas had been led to believe. Now with the Holiday fast approaching Thomas is alone, surrounded by family he doesn’t much care for and to make matters worse, he has just learned of his beloved brother’s death.

Edmond, Thomas’s younger brother, was a true friend and ally, very understanding about Thomas’s choice in partners. So much so that it would seem even in death he is still looking out for his brother. A gift, of sorts, arrives along with Thomas’s father in the form of one Lord Henry Appleby and his sister. It would seem that Henry and Thomas have many things in common, including the same best friend, Edmond, and a proclivity for other men.

A deal brokered by Edmond and Henry to ensure Thomas both happiness and stability is set in motion, but Edmonds untimely death and Thomas’s clingy ex could destroy even the most intricately detailed plan.

For such a short story there was a lot of attention paid to even the finite details of descriptives and characters. Set in a time where a Gentleman’s word was his bond and an agreement carried as much weight as a contract. But the relationship between Thomas and Henry becomes much more than just a means to an end, they truly care for one another. The narration was the perfect compliment to the characters and the storyline, Morey is so well spoken and has sort of this aristocratic air to his voice that blended perfectly with the written words of this novella.

A perfect story for the season, and very inexpensive for either the audible or the e-book version. I highly recommend for fans of historical romance, or just fans of romance in general.

Acceptable performance, not a good story

Things look bad for Thomas this year. His brother, Edmund is dead. His sister married his lover and they are expecting a baby. His father expects him to marry someone of “peerage” to further the family line, but Thomas is gay.
Thomas’ father and Edmund, knowing Thomas is gay, have concocted a scheme to accommodate that. They agreed to arrange a marriage with a woman who “needs” a husband, but who doesn’t want one. She does, however have a brother who is gay, so it’s kind of like an arranged, yet secret, lover.
Yup.
That’s the plan. In Regency England.
But wait. It gets better.
Edmund isn’t really dead! He is secretly married – yes married – to a Russian Prince (or something) who is willing to masquerade as a valet to be in a relationship with Edmund in England.
But wait. There’s more.
Thomas had a lover before all of this arranged marriage stuff. Lord Darrow. Darrow married Thomas’ sister but he still wants Thomas even though they broke up. (Or whatever you do in the case where your ex-lover is now your brother-in-law.) Darrow is determined to keep Thomas so he tries to keep Henry away by ordering a servant to seduce Henry in front of Thomas.
And then...
Jonah, the manservant, was crushed when he found out Edmund was dead, because he’s in love with Edmund. Now that Edmund is back and in love with the Russian, Jonah is crushed again and wants to leave the estate.
But…Thomas and Henry fall in love (over the course of 24 hours) and have a secret… Ok, it’s secret, so I’ll let you discover that on your own. Needless to say, they end up with a bizarre HEA where Henry’s sister is pregnant. It’s never explained how this happens, but she is. And Thomas’ sister and Darrow are now a loving family. And Henry and Thomas are together but they don’t sleep in the same bed.
**
Ok, I can’t really even properly summarize this story because it makes no sense. In order to buy into this you have to completely ignore history and just accept that this is a made up world that takes place in what feels like Regency England. Every other person is gay and yet that is sort of accepted but not and in some countries you can get married but in others not.
The concept was great. Cute idea. Get two gay guys together with a wife as a beard through an arranged marriage. Though bizarre, there are worse arranged marriage stories out there. However, the execution failed. When I was listening to this my first thought was – oh man. I wish I was reading this because it’s so confusing. Second, I thought – this reminds me of those old Harlequin novels with the white covers and the swooning women with titles like “Seduced by her Brother’s Duke”. It had no logical plot plan. There were subplots and characters coming out of the woodwork with no real purpose and no real meaning. The main characters spent very little time together and in no way did I feel they could possibly fall in love. Yet, they confess their love way before the last page.
Sure, I get the insta-love thing. But in this case they weren’t even around each other enough for that unless one of them is a werewolf! Then you add in the Russian husband and the dead but not dead brother and the valet who was in love with him… What? So confusing. This is 100 pages and though in the right hands all that might have worked, it did not work here.
I really wanted to love this. Usually by the time a book makes it to audio it has been “screened” at least by the market (I’ve been told audio books are made strictly based on sales) so someone (lots of someones) liked this book enough to buy it and then Dreamspinner made it an audiobook, but…like I said. Maybe if I had read it some of this would not feel so confusing because I could flip back and forth… or not.
Anyhow, I cannot recommend this book and give it 2 out of 5 stars, those for the idea and the effort.

Audio:
I really like Paul Morey and in fact was interested in this audiobook because I knew I would enjoy the narration (at least) because he always delivers solid performances. And he did. But… he was not the right choice for this story. It needed someone with a British accent or a very crisp and starchy sounding voice. Paul sounds too contemporary and loose in his speech. It just didn’t match.
So – not Paul’s fault. I give the narration a 3.5 of 5 because he did a great job with what he was given but he just wasn’t the right choice for this type of story.

Overall a 2.75 of 5 stars.
Maybe it’s a better book to read, but definitely not worth the listen.
Overall Impression:

it's a lovely story. It was read well, I am just used to stories taking place in England (especially historical ones) to be read with an English accent.

Not a historical, maybe a fantasy?

First of all, if a book is set in a country the narrator should speak with that country's accent. That's not Paul Morey's fault, but the person/publisher that keeps putting books out without the correct accent attached needs to knock it off.

Secondly, this book is not a historical, there is almost nothing that would make it so other than the characters having Titles and the time frame in which it is set. I can't even classify it as an alternative history as it appears that there was little to no research done into the time period. The characters are unbelievable, the situations and the premise of the book would be questionable as a contemporary let alone as a historical, and I spent way too much time giggling at how silly it all was.

If you go into this knowing it is not a historical, that it's really not even trying to be one, you can enjoy it for a sweet, slightly silly story that will make you smile. But please do not judge historicals by this book because there are so very many amazing historical books out there that I'd hate for this to turn you away from them.

I should have passed this one

The description sounded intriguing, but it turned out to be bland and uninteresting. The story is predictable, the characters are flat, and I had a hard time getting through it. Every step seems forced and uninspired. For me this was wasted credit.