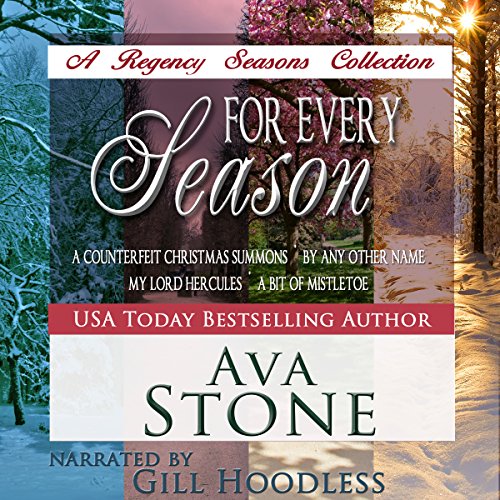 By: Ava Stone
Narrated by: Gill Hoodless
Try for £0.00

In A Counterfeit Christmas Summons (originally found in A Summons from Yorkshire), Lady Emma Whitton decided it was time to take her future in her own hands. She has been in love with Viscount Heathfield since she was in leading strings. Unfortunately, it's been almost that long since she's laid eyes on her brother's old friend and vice versa.

In By Any Other Name (originally found in The Betting Season), Lady Philippa Casemore caused quite a scene at her very first ball of her very first season. She even landed herself, somehow, on the pages of the infamous betting book at White's Gentleman's Club. Unfortunately, she doesn't remember one moment of the night in question.

In My Lord Hercules (originally found in A Season to Remember), Miss Miranda Bartlett was on a mission to locate her missing friend. Determined hoyden that she is, she did whatever it took to get the answers she seeks - even if that means dressing like a dandy, sneaking into a gaming hell, and surrounding herself with London's worst reprobates. However, she didn't plan on bumping into a herculean gentleman along the way.

In A Bit of Mistletoe (originally found in A Pact Between Gentlemen), Everett Casemore, the very serious Marquess of Berkswell, returns home for Christmas, slightly shaken by the death of an old friend. Determined not suffer the same fate at the hands of a woman, Berks resolves himself to eternal bachelorhood. Unfortunately, both his resolve and his peace of mind are threatened by the arrival of a very pretty but most unsuitable lady.

What listeners say about For Every Season