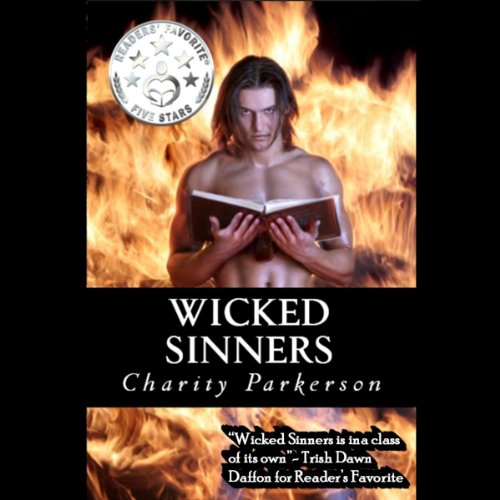 Adriana Claymore moved to Martinique to start a new life, but when she stumbles upon an ancient book, she finds herself drawn into a centuries old battle between brothers. "Sorcier" Julien Dubois has been on the hunt for his twin, Jacques, ever since the day that Jacques stole a book of spells from him and allowed their younger brother to die. Adriana is about to change the game, but when she gives her heart and soul to one of the brothers, she must face a difficult question. Did she lose herself to evil? Wicked Sinners is the second installment in Charity Parkerson's Sinners Series.

Wicked Sinners by Charity Parkerson is a second book in the Sinners series. And it's a very nice standalone book. Since I haven't read the first book, I have no idea what it is about but this one was perfectly good without following the series from the very beginning.

I very much liked the whole soulmates idea and how druids could connect their souls to each other. My heart broke for all the heroes! And I'm really glad that Adriana experienced happiness with Julien and the triangle with Alain turned out to be very nice :) The side story of Jacques and his soulmate is very sweat as well.

There are books that aren't good when listened to, but this one was excellent. So I guess it is fast paced (since I didn't want to rewind my player all the time) and it has a nice story arcs and relate-able characters. The way Adriana changed throughout the book made it very interesting to follow the story. And quite a lot this book made me cry in a good way.

I love re-reading & re-listening to this author's earlier work. I always find something new and it makes me like her work even more.

This is a paranormal tale of druid gods, oracles, vampires, peripherally, and the interaction of souls. Some other paranormal beings are referenced too. The book idea was okay, but the book fell flat in its execution for me. There was little focus on the abilities of the paranormal. What was shown was the ability to heal, to be immortal, to blink from one place to another, to move items with the mind, and, for the goddess, to foretell the future somewhat. That was about it, with little exception. It was nice that the H was attracted to the h b/c of her inner beauty as much as anything. That’s so rare in romances, especially, where the physical aspects tend to reign. On the other hand, the “book excerpts” from The Book of the Unknown could’ve been omitted. They were weak and so clearly made up historical statements. They were so weak that it was hard to believe that they would’ve ever been treated by anyone as sources of wisdom or direction. They seem to be exemplify the author trying too hard to make the story something that it wasn’t, and it only detracted from the story. Too, there were times when the dialogue seemed too youthful, immature. And a couple of times the phrasing was strange, like it was written by a person first learning English. I also didn’t like that all of the sex scenes were essentially the same. The author showed no true interest in or knowledge of sex in them. They were short and not explicit nor memorable in any way. The author used words of desire, but I wasn’t convinced. There was no follow through after the words and expressions. The plot twists near the end was good, though it also had an unspoken and weird implication. Still it didn’t make up for the rest of the lack I experienced in the book, but it was an admirable addition. I also liked the side story of Jacques and Chloe, a blind oracle/goddess. Their story was short and didn’t start until the last 1/3 or so of the book. And the description of Jazz Anderson, the Assasi Du, sounded great. So there were some good elements, but, altogether, it was a miss for me. Again, the idea was good but the execution was less so. The narrator did a good job. She handled the male, French accents the best, though they essentially sounded the same. But it didn’t take anything anyway. She had many characters to portray, so her job was a challenge. She did a good job with them. I prefer her depiction of the males. The main female character, Adriana, sounded to whiny, nasally and child-like to me.