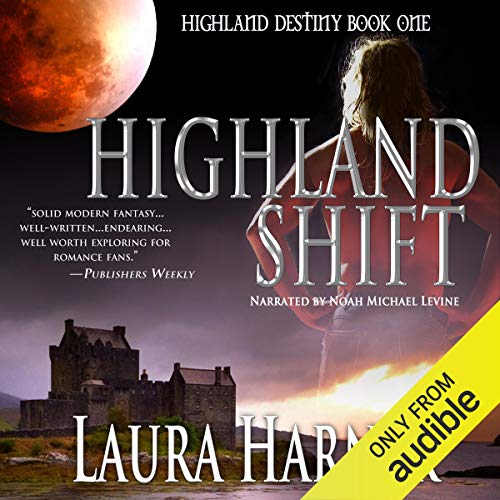 The Highland Destiny saga begins with Highland Shift, a tale of betrayal, murder, and magick spanning two continents and hundreds of years.

Elena MacFarland wonders what everyone else knows about her new farm that she doesn't, and whether she'll live long enough to find out. Betrayed by her fiancé and the powerful Worthington family, Elena fights back and negotiates a comfortable settlement with one small caveat: she must live in Scotland for two years.

One kidnapping and two attempts on her life later, the darkly arrogant Scot, Faolan MacGailtry declares himself her new protector and moves into her farmhouse. Major problem? He was present at all three incidents. Elena decides to follow the adage to keep her friends close and enemies closer--but which is he?

One by one, Elena uncovers Faolan's darkest secrets: his Druid heritage, his connection to her past, and finally, the deadly curse that is powerful enough to destroy them both.

Notes: This is the first book of the Highland Destiny series and includes multiple paranormal elements, including Druidry, Fae, shapeshifting and magick. Heat level: Slowly builds from extreme sexual tension toward "bring-some-ice-water" hot!

the narrator is horrific

What disappointed you about Highland Shift?

Has Highland Shift turned you off from other books in this genre?

I like books about the Scottish Highlands and will continue to look for good, non pornographic stories in this genre.

Would you be willing to try another one of Noah Michael Levine’s performances?

I don't know. I feel his voice would continually remind me of this book so probably not.

If you could play editor, what scene or scenes would you have cut from Highland Shift?

Why go there? There would not be much left of the book when I got through with it! This is a fantasy story so I have no problems with a shape-shifter falling in love with a Fae. But this went way overboard!

I have nothing good to say about this book. I am looking for audio books that can be played while I clean house with the grand children nearby. I would be livid if my teenager got ahold of a book such as this.

Please, help, I had to fast forward and then stop!

Very few times have I ever written a bad review. This may even be my first! But, please! At first I told myself I would listen and I tried. Narration was bad and the story was bad. I kept asking myself, what? Where was the story going? Oh yeah, that's right. The story just went on and on and my interest kept going and going to fade. I finally FF and then give up. Now, with that being said, you may enjoy, love this series. But for me, NOT!!!

I thought this sounded familiar and part way through I knew why. It is the essence of the Highlander series reworked. It was free so no refund requested, but I cannot recommend it either. KMM did it first and better.

Loved this book I couldn't stop listening to it.

I love romance with mystery and even the other worldly things that go bump in the night. And this book gets you right from the start. And I love a book with love and romance and sex. And this book has it all. You don't have to wait until the book is half over before it really gets HOT. And it stays hot all through the book. But it also has you hanging at the edge of you seat or bed wondering what will happen next. I am done with books one and two and now I have to rest up so I can listen to book 3. Wish I could find more books like this.

Magic in every syllable

What did you love best about Highland Shift?

The illustrious kidnapping of my very own soul, from our world into the Highlands of Scotland

What was one of the most memorable moments of Highland Shift?

My favorite fact of this story is how all the "wolves" stick together, even after centuries

Faolon, of cause. I love how the shifter in all his glory, manhood, cleverness can't help but go stir crazy ones he discovered Love

I got bored with this story. Nothing held my attention. Had to stop with 7 hours left.

Great story telling of love, adventure and drama. Continuous action and excitement through out the book. Great job! I have read this book four times already.

The plot was incredibly light, the character's motivations were nonexistent, and a lot of things didn't make much sense. The dialogue was odd, and sometimes cringeworthy. The main character was written as a "smart lawyer", but in general if someone needs to be described as "smart" many times, they certainly don't come across as such. The main character mostly acted like a child or a very naive and stunted adult, and was oddly obsessed with her own virginity. However, the sex scenes were hot and thorough; closer to erotica than most I read. But that didn't really fix it for me. I thought the book was almost done, so I checked, and apparently I was only halfway through. I couldn't go on any more. Maybe it got better? Not sure.

If you are looking for something quite steamy, and don't mind some clumsy writing, this might be good for you!

I really enjoyed this book ,loved The Druids and wolf storyline enjoy the characters the narrator was awesome and the love scenes in this book are described beautifully. looking forward to reading the rest in this series

Good but could have better

This was a good story that had great promise. Unfortunately it didn't quite fulfill it's destiny. In general I liked the writing but I found it lacking at times. There was just something missing. I can't quite put my finger on what was amiss. Well, that's not 100% true. There was pacing problems. Not a lot but a few times I wished things would speed up some. Especially at the end. Plus the story just didn't feel complete.

This is the first Laura Harner book that I've read and I'm not sure if I'm a true fan of hers. The world that she's created has captured my interest but her writing style needs some polishing in my opinion. I plan on continuing the series at some point. I think the antagonist in this book is the antagonist in the second book but I'm not sure. He didn't get his comeuppance so I hope he is. However if the protagonists from this book don't have a huge part in book two of the series then the author will really be letting her readers down. I'm not ready to write Harner off yet. Like I said, she has promise.

The narrator for this was fantastic! He had such a nice voice and it was wonderful hearing his accent. I had no problem immersing myself into the story. He immediately drew me in. Then to make the experience even better he "acted out" the scenes instead of simply reading them. You could hear the characters' emotions coming through in his performance.