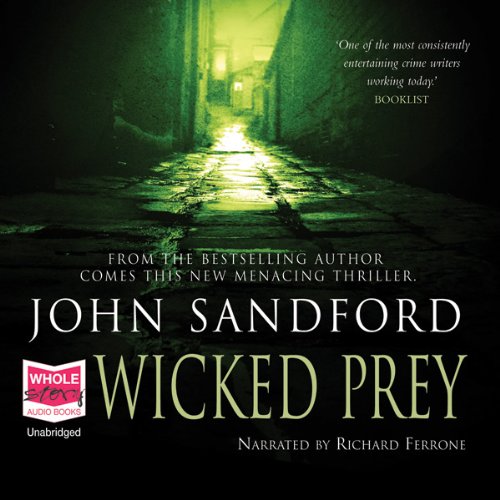 By: John Sandford
Narrated by: Richard Ferrone
Try for £0.00

Having spent two years in hiding, a big-time robber is back. It's a couple of weeks before the Republican party convention and thousands are spending cash, which is flowing into a warehouse protected by only a few armed guards. Meanwhile, Lucas Davenport has problems of his own. He's been targeted by a psychopathic pimp, but it's not Davenport he's after; it's his daughter.
©2009 John Sandford (P)2009 Recorded Books LLC

What listeners say about Wicked Prey

John Sandford at his best,a gripping and enjoyable "read" ,Richard Ferrone's narration is the cherry on the top.

Enjoyed most of the book, the Lettie story Arc was not great just a page filler.

Overall not a bad addition to the series.

Nice story line and no serial killers.
Shame I have had to jump about 15 books as the whole set is not available on audible.
Would it be possible for you to look into this problem.

Another fantastic Lucas Davenport story from John Sandford! None of the Prey series ever disappoint. Richard Ferrone's narration always brings the books to life amazingly well.

The Series Keeps On Going

John Sandford has been writing the Prey novels for so long that I don't think anyone, at this point, even wonders what the titles mean anymore. At best they have a little bit to do with the plot; often, they just sound cool. They're fairly interchangeable, at this point. Thankfully, the books themselves aren't: they're distinctive, intelligent, and interesting. Wicked Prey (the title could have applied to any of the books in the series) is one of the better entries that Sandford's penned, an amusing look at the Republican Convention and the things that might (could) happen while it occurs.

First, Lucas Davenport has to deal with a group of thieves. They have, in the past, specialized in armored car robberies, but the guards are getting more sophisticated, the cops are getting better at catching the people who rob them, and they killed two guards in New York, so the robbers decide to change targets. They have a woman who organizes the jobs for them, and she's devised an interesting way to get money from people, without anyone the wiser. It involves things going on at the Republican Convention (the author makes it clear that the Republicans were chosen only because that's who they got the info on; it also helps that the author sets his books in the Twin Cities), and the people being robbed will have reason to conceal what's occurred.

Simultaneous with this, a pimp who blames Lucas Davenport for all of his troubles has decided to stalk him, and see whether he can do something, presumably involving Davenport's foster daughter. And piled on top of that there's a crazy with a .50 caliber rifle wandering around town. He's apparently sighting the gun in for a shot that looks to be almost half a mile, which (if he can make the shot) would be almost impossible to prevent, in terms of assassinating a prominent person; remember, John McCain is going to be at the convention, so everyone's nervous.

This was an amusing Prey novel, with an interesting bad guy, one who's not all bad. He's a bit like Robert DeNiro's character in the movie Heat, a working class guy who is generally moral and upstanding, it's just that he robs people, and occasionally kills them. I enjoyed the story and would recommend it.

Richard Ferrone was outstanding with the delivery of the story