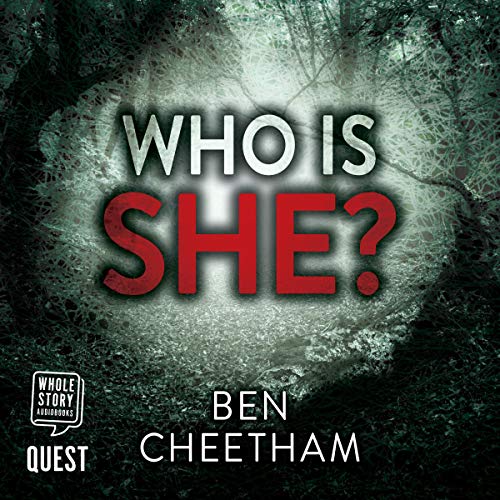 By: Ben Cheetham
Narrated by: Rosie Akerman
Try for £0.00

After the death of his wife, Jack is starting to get his life back on track. But things are about to get complicated.

A woman lies in a hospital bed, clinging to life after being shot in the head. She claims to remember nothing, not even her own name. Who is she? That is the question Jack must answer. All he has to go on is a mysterious facial tattoo.

Damaged kindred spirits, Jack and the nameless woman quickly form a bond. But he can’t afford to fall for someone who might put his family at risk. People are dying. Their deaths appear to be connected to the woman. What if she isn’t really the victim? What if she’s just as bad as the ‘Unspeakable Monsters’ who put her in hospital?

What listeners say about Who Is She?

This is quite possibly the worst book I have ever read. A total waste of money. Has now put me off this Author.

Why a high pitched woman’s voice?

The main protagonists are mostly males. It was excruciating to listen to the story as the men sounded so pathetic and unbelievable characters. The voices.. I just could not relate to any of them. Read the book, it will be less painful than the audio.

I have listened to several books by Ben Cheetham so was excited to start ‘Who is She’ ... and it did not disappoint!
All action with a few twists and turns along the way.
I found myself really connecting with the characters and willing them to get through the many obstacles and challenges and make it into the next chapter.
Very well read by Rosie Akerman who expertly brought each character to life. Great story highly recommended

terrible reading. intonations in all the wrong places. I couldn't stand her shouting !!! awful