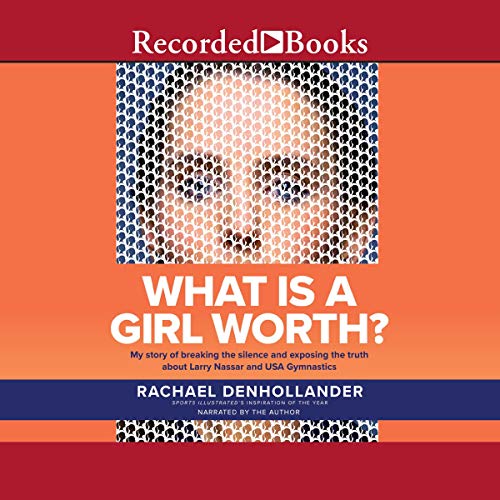 What Is a Girl Worth?

Rachael Denhollander's voice was heard around the world when she spoke out to end the most shocking scandal in US gymnastics history. The first victim to publicly accuse Larry Nassar, the former USA Gymnastics team doctor who abused hundreds of young athletes, Rachael now reveals her full story for the first time. How did Nassar get away with it for so long? How did Rachael and the other survivors finally stop him and bring him to justice? And how can we protect the vulnerable in our own families, churches, and communities?

What Is a Girl Worth? is the inspiring true story of Rachael's journey from an idealistic young gymnast to a strong and determined woman who found the courage to raise her voice against evil, even when she thought the world might not listen. This deeply personal and compelling narrative shines a spotlight on the physical and emotional impact of abuse, why so many survivors are reluctant to speak out, what it means to be believed, the extraordinary power of faith and forgiveness, and how we can learn to do what's right in the moments that matter most.

What listeners say about What Is a Girl Worth?

I've been moved to tears again and again listening to Rachael Denhollander tell her heartbreaking story in "What is a Girl Worth?" After undergoing horrific abuse at the hands of someone deemed 'trustworthy' and 'the best', Rachael is tragically failed again and again by those who ought to have been there for her. In spite of this, her commitment to truth, justice & advocacy is breathtaking & incredible. She, and the army of fellow survivors, courageously stand against the world to pursue the justice they urgently deserve.

Listening to Rachael read her words in her voice is heartbreaking, awe-inspiring and fitting given how her voice was silenced for so many years. Rachael asks us to imagine ourselves in the story; would we stand with the survivor and the voiceless, even when it's costly?

This book will change your world, though you might have to cry in front of strangers if you choose to listen in public!

This book changed my life, it showed me that good can triumph over evil and that strong women can defeat evil inspiring. You could here the emotion in Rachael's voice, so genuine and true.

Rachael writes so clearly about her experiences in bringing about justice. She is so brave and faithful and it’s amazing to hear her honest account of what she faced with all the real life going on behind it. I loved this book and will be recommending it whole heartedly to others! I have learnt so much from listening to her tell her story.

I found this book after watching Athlete A and The Price of Gold. It was really interesting to see all that went into bringing the case to trial, and to understand what the victims go through. Even on the interviews of the survivors there’s a mixture of comments varying from ‘why didn’t they say something sooner’ or ‘pelvic floor therapy is legit’. This answers all those questions.

It goes without saying it discusses the impact on people’s whole lives after suffering abuse.

Rachael read it herself, her voice is calm and soft

She knows what is the right thing to do

Thank you for saying all the words so many need to hear. And for understanding the intricacies of being a victim, the injustice of our justice system and how organizations chose to do that which is not right , but for the good of the organization.

Evil will end when good people do what is right and not easy.

Thank you for being you!
Beth Jukuri

As a father of a young daughter, this account cut me to the heart. If you are a patent, READ THIS BOOK. It opened my eyes to the reality of sexual abuse. Now I know how to better protect my children. Now I know how abuse can happen literally right in front of a watching parent, without raising any suspicion. Now I know a little bit more about how to draw out a child if (God-forbid) I suspect something has been done to them. And lastly, now I have a glimpse into the lonely world of a sexual assault survivor. Visceral. Raw. Real. This book has changed the way I view the world.

As William Wilberforce said, “Having heard all of this, you may choose to look the other way, but you can never say you did not know.”

Rachael, thank you for sharing your story with us.

This well narrated story of abuse, cover up and choices to stand on the truth is a compelling story for all to be challenged by. As a Pastoral Counselor this story gripped my heart because it is the untold story of hundreds of thousands of young girls and women both in history and today. The compelling question "What is a little girl worth" is a call for all of humanity to rise up and to protect the innocent in our world.

Every adult should read this.

This should be required reading for high schools. Our children need to know that there is a way to advocate for themselves and their friends. This book exposes the horrible way institutions back up pedophiles and would rather bury the truth than risk being sued or exposed to lawsuits. Child molesters and abusers always seem to fly under the radar, and they are cunning enough to know how to work the system. How else could someone like Larry Nassar flourish in an environment that looks on the surface to advocate for children with so called checks and balances to protect them. I am appalled at the way this all played out and how it took what it did to bring this story to the surface. Applause to Rachael Denhollander for her insight and bravery to keep going at great risk and cost to her own mental and physical health. This book was also narrated by the author and was extremely well done.

Unflinching story reminding us to never be silent

Denhollander powerfully narrates her own story of how her abuser was brought to justice. Rachel vividly portrays her role but she gives credit to all the others involved who had to fight so hard against the legal system and trusted institutions in order to take down this man who had abused dozens. She also explores the culture of silence and self-interest which allowed him and others abusers to flourish for years without being stopped.

Rachel's story demonstrates that Ignorance is not an option. Too many young lives are at stake.

Incredibly timely and important. This is a must read/listen.

This had to be a hard book to write. For all her struggles of bringing darkness to light, I’m grateful she could get this message out. This should change your perspective towards abuse, how to help survivors, and also what traps to look for in cases where the truth is trying to be suppressed. This is a story you wish didn’t have to be told and I’m truly sorry to everyone who was abused. Their pain and struggles are something we can easily ignore, and even worse, dismiss. However, their true strength shined and we thank them for that. May justice flow like a river.

wow! Makes me so angry

I cant believe what our justice system calls “justice”!!! They carry “innocent till proven guilty” a little too far. what those poor victims were put through.

This book was engaging in a way I didn’t expect. As a former gymnast and coach and now a medical social worker in pediatrics I thank you from the bottom of my heart for so bravely and skillfully going after this justice and so we’ll well articulating your story and sharing with whomever is brave enough to listen. I’m sure you have empowered countless others in immeasurable ways. I hope my prayers for continued improvements in victims rights will help in some way.

Denhollander is an inspiration - Must Listen

Denhollander is amazing and her book does not disappoint. As a Louisville lawyer, I have followed her for a couple of years. I thought her book might not live up to expectations but it surpassed them. It’s part memoir, part theological exploration, part courtroom thriller. I hate that she and so many others had to survive abuse. But, man, what a gift she has given back to the world in being a voice for the voiceless and backing down at nothing.

Rachel’s incredible journey of strength, courage, mental, physical and emotional anguish and raw honesty open the eyes, hearts and minds of the reader to the entangled web that led to Larry Nassar’s fall and accountability. Having suffered a deep betrayal in my life, I could feel many of her emotions....do the RIGHT thing with love....
Our Heavenly Father was with you through it all and your abilities in so many realms(along with your family)made you the one to carry this through. Thank you for the bravery to tell your story.