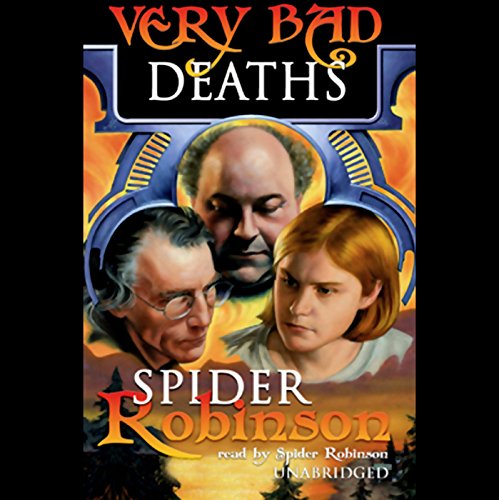 Russell Walker retreats from the shock of his wife's death by becoming a hermit in the woods of British Columbia. There he finds himself thrust into a precarious role as intermediary between a telepath called Smelly, so sensitive he can't stand to be near most people, and Constable Hilda, a skeptical police officer who needs Smelly's insight to track down a monstrous serial killer.
©2004 Spider Robinson (P)2005 Blackstone Audiobooks
Suspense Fantasy Science Fiction
Show More Show Less

It takes a rare talent to do what has been done here. This book contains concepts of torture and sadism that might well make you lose your breakfast to think about...were it not that they are sorrounded by the warm humour and fast wit that is unique to Spider Robinson. Even a book like this, remenicscent of Dean Koonz and Stephen King, he can turn into a feel-good experience. And don't fool yourself, early on, that you can predict the plot....you won't!!!

A reasonably good story, though nothing like you would expect based on the Callahan's tales. Normally I try to review the audio side of things, figuring that there are many reviews of the content at other booksellers. But I have to mention that the content is somewhat disturbing and more visceral due to the audio experience. It is certainly not the nastiest, and certainly not the scariest or most violent, story around, but it has some "I wish I had never heard something that creepy" bits that remind me of wishing I had never seen the movies Seven or 8mm. Fair warning -- be sure you like stuff like that.

The narration by Spider is a bit weak. Far from the worst around, for sure, and the critics of his narration have gone a bit far. Since it is his story, there is some value added in him narrating it. But you certainly would not want him as a narrator for someone else's work. He really only has three or four character voices, and there are (a few) more than four characters that need voices.

Overall, I would have to say that this is fine, but there are better choices for Robinson irreverence, for spooky stories, for characterization, and for narrations (though maybe not all four at once).

Surprisingly, the author is a very good reader, one of the better ones I have heard and it was a pleasure to listen to him. The story takes place in and around Vancouver both in the city and surrounding countryside. Descriptions of people and places are vivid and often humorous - the protagonist/narrator has a wry outlook on life that sometimes made me laugh out loud (not easy to get me to laugh during my commute). The characters are rich and interesting, often quirky and always satisfying. The beginning of this book is great. The ending is not as good as the beginning but it is good. The middle of the book just never happened and it's very frustrating to go from "Wow, I can't wait to hear what's next" to "whoa - it's over!?" so fast. The author is very skilled at building suspense but just when he had me eager to hear what's next he turned around and went off on a tangent about other people and prior times. These tangents are often charming and well written but they cover characters not central to the plot, happen too often and eat up the pages I wish had been the middle of the story. I feel like I was introduced to these people and then never got the chance to get to know them. So if you want a good listen, okay, it's a good listen. If you want to listen to a good mystery novel, you may find yourself frustrated.

Not any more I don't think.

I'll try something else. How about a 'Sector General' or Zenna Henderson book?

Would you be willing to try another one of Spider Robinson’s performances?

What character would you cut from Very Bad Deaths?

If you’re familiar with the top notch wordplay, random narrative segues, and the boots on the ground insight into human psyche that Spider Robinson brings, this won’t disappoint.

This amusing, terrible , and fun story. Most hear!

This would make a great sci-fi, horror, mystery movie. It is suspenseful, scary, nostalgic, and fun.

Couldn't get through it

I made it half way, but couldn't go any further. The author is the narrator and sounds like he needs to swallow, I can hear the spit dying to be released! Also it didn't give any "life" to the story. With a better narration I could probably finish it and not think how boring and dull and would have made it to the end.

I enjoyed every minute of this book. The characters were memorable The narration was perfect. I didn't want it to end.

Decent book but a bit disjointed

Reading Spider is just like hanging out with an old friend. I can just easily identify with his writing style and his train of thoughts. This book started out a bit disjointed but finished strong. I enjoyed it.

as great a writer/story teller as spider is /he is a bad narrator. i missed barrett whittner's delivery of this geneus' lines...can i ask for a redo...by barrett? amazing what a voice can do.