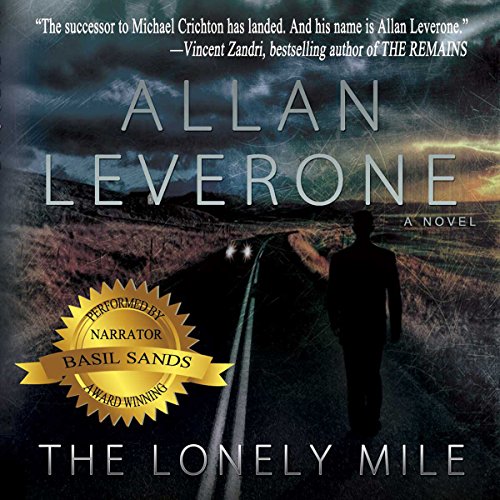 By: Allan Leverone
Narrated by: Basil Sands
Try for £0.00

When struggling hardware store owner Bill Ferguson witnesses a kidnapping in progress, he reacts instinctively, breaking up the crime and saving a young girl. But the kidnapper, a sociopath known as the "I-90 Killer," escapes and vows revenge, targeting Ferguson's own daughter as his next victim. Now one terrified father must unravel a plot that may go much deeper than he realizes, racing against time to save his only child from an unthinkable fate.

Allan Leverone is a three-time Derringer Award finalist for excellence in short mystery fiction, as well as a 2011 Pushcart Prize nominee for his dark short story, "Dance Hall Drug." His short fiction has been featured in >Needle: A Magazine of Noir, A Twist of Noir, Shroud Magazine, Dark Valentine and many other print and online magazines. His debut thriller, Final Vector, was released in February, 2011 from Medallion Press, and his upcoming thriller, The Lonely Mile, will be released this summer from StoneHouse Ink. Allan lives in Londonderry, New Hampshire, with his wife of nearly thirty years, his three children, one beautiful granddaughter, and a cat who has used up eight lives.

"Allan Leverone delivers a taut crime drama full of twists and conspiracy. A serial-killer thriller with a heart." (Scott Nicholson, best-selling author of Liquid Fear and Disintegration)
"Thriller fans will enjoy Allan Leverone's new book, The Lonely Mile, which will carry readers along as a daughter is stolen by a vengeful serial killer and we follow her father's determined efforts to rescue her at all costs." (Dave Zeltserman, author of Pariah and Blood Crimes)

What listeners say about The Lonely Mile

This book was impossible to stop reading. It starts with a regular guy named Bill witnessing an attempted kidnapping of a teenage girl. He realizes he is the only one who sees what is going on, and intervenes. From that point on, the story is non-stop. The subject matter was difficult but was handled well. I found myself quite attached to the characters, and as a parent, I couldn't help but wonder how I would feel if I was in Bill's shoes. I thought the story was intense, and I look forward to searching out more books written by Mr Leverone.

If you could sum up The Lonely Mile in three words, what would they be?

Would you recommend The Lonely Mile to your friends? Why or why not?

What does Basil Sands bring to the story that you wouldn’t experience if you just read the book?

I like his style, added some feeling to the story

This book was terrible.

What would have made The Lonely Mile better?

The narration was appalling, full of mispronounciations and hesitations. Siri would have done better. The novel's plotting, characterization and dialogue were all thin, boring and transparent.

Would you be willing to try another one of Basil Sands’s performances?