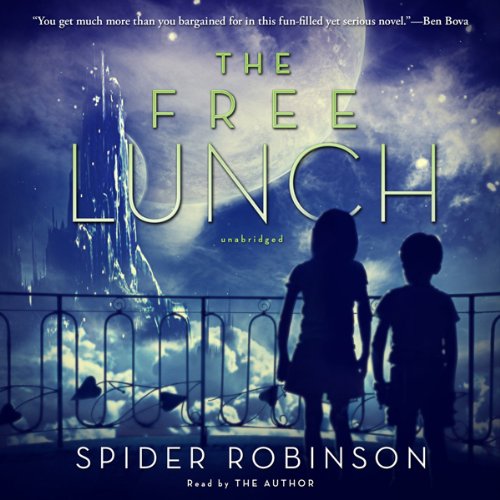 Under the façade of the world’s finest theme park lies a secret which could alter the course of human history.

Mike and Annie, refugees from the world outside, find a home underground, behind the scenes of Dreamworld, a theme park where hope exists as it does nowhere else. But Dreamworld is threatened by a jealous competitor who kills what he can’t have. As if this were not trouble enough, the two discover that each day there are more of the “trolls” who maintain Dreamworld than there were the day before. As the trolls continue to multiply, they must discover why, or it could mean the end of Dreamworld -and the real world.

Knotted in conflict and turmoil, what was a wonderful, carefree place becomes a battleground on which Earth’s future is at stake. Only Mike and Annie, two unconventional heroes, can save it.

Spider Robinson, winner of three Hugo Awards and a Nebula Award, is renowned for his Callahan’s Place series of bestselling novels. With his wife, Jeanne, he has also written the award-winning Stardance series.

“You get much more than you bargained for in this fun-filled yet serious novel. Spider’s the antidote for entropy, the blahs, and the pernicious notion that humor and good grace are absent from the SF field.” (Ben Bova)
“ The Free Lunch is a fast-moving homage to the lighter side of Robert A. Heinlein…Robinson knows how to generate tension without losing his sense of humor, a more difficult trick than you can imagine.” ( The New York Times)
“Mike and Annie are the kind of characters that return to mind long after the book is done, and the tale is as jaunty as only Spider can make it in his Callahan mode. How can you possibly fail to enjoy this one?” ( Analog)

What listeners say about The Free Lunch

It was a decent book. Not great but not bad. I would say it wasn't one of spider's best. I liked the story and the characters but I had a hard time getting into it. By the end though it turned out to be better than it started.

Best part was the author

This was a great story. I didn't give it five stars because then what do you give The Hobbit? But I enjoyed it very much. I knew I was onto a winner when the preface, by the author, had me laughing and really eager to hear more. This was my first Spider Robinson book, but it won't be the last.

Having read the first three of the Callahan Chronicles many years ago, I recently looked for more from Spider Robinson. I was delighted to see some of the later Chronicles, and some other Robinson books, available with the new Audible.com Plus Catalog. What the heck, I thought, and I decided to try something new.

Dreamworld is Disney to the nth. Mike is a 12-year-old who wants to permanently hide from his past within Dreamworld. Annie is a midget who's already doing just that. The unlikely duo - there simply isn't another description - having met for the first time, immediately connect and then get into a death-defying adventure as they try to figure out what the [insert expletive] is trying to infiltrate their paradise of fantasy and instruction manuals.

"The Free Lunch" was narrated by Spider Robinson himself. The man, the myth, the legend. His tone and enunciation tell the listener what had been in his head as he'd written his book. This intimately shares the author's intentions with the listener. As for the listener hemself, s/he can easily follow Spider Robinson's cadence. I had the book running in the background as I focused on a document layout; and I don't think I missed a thing.

The story is light yet solid, like the pastry my mom used to make. It's just as delightful. It's been a while since I listened to something that was so much fun I dropped what I was doing to share my opinion. Spider Robinson is as funny and as robust as I remembered. I hope that the reader of this review enjoys "The Free Lunch" just as much as I did.

I recommend that Audible members check out the Plus catalog if you haven't already. There are full versions of wonderful books, many of which you may find familiar. Since August I've listened to over a dozen of its features, many of which had actually been on my Wish List for purchase. To many readers it will be, well, a Dreamworld.

I have been a Heinlein fan for nearly 50 years and before reading this story by Spider Robinson the only other novel I had read (or listened to) was Variable Star that he co-authored with Heinlein. I can see by Spider's writing why some call him the modern day Heinlein. This book was very well done and I plan on reading it again in the very near future. Because of it I'm currently listening to an old Heinlein novel, Rocketship Galileo, just because Spider narrarated it and he does have a good speaking voice. I am looking forward to starting his Callahan series next. Keep up the good work Spider! I was surprised that they didn't have him write the latest Heinlein novel that recently came out.

Excellent stuff! Spider did good as always!! one of my favorite books and so glad that the audio version rocked it.

I have been trying for more than a decade to get the curriculum committee and one of my deans to let me offer a political science fiction course for lower division GE. If I ever succeed, this will be one of the books I have my students read. What an EXCELLENT story! How have I never read this one before? I sure would like to visit a Disneyland with Tomorrowland turned into Heinlein Land! ;-)

I can't believe with all the times I have read Star Beast, it only for the first time occurred to me that if I get a big dog, she will be named Lummox.

Dreamworld is an amusement park...along the lines of Disney or Six Flags, but seems to be themed around Beatles songs. It's the happiest, best place in the world, staffed with little people (midgets and dwarves) along with a few full size people. The book starts out with 12-year-old Mike breaking into Dreamworld with the intentions of never leaving. He soon meets Annie, an adult little person, who has been living "under" in Dreamworld for 13 years.

They develop a friendship and soon discover that something odd is happening in Dreamworld. Employees are counted as they enter and leave the park daily. Lately, more have been leaving than have entered. Annie is determined to find out why.

I really hate to give away more than that. This is science fiction. While one of the main characters is a 12-year-old boy, I wouldn't necessarily say it's a children's book. There are some swear words, but nothing too terrible or irrelevant. If I had an 11 or 12 year old wanting to read this book, I would let them. It's pretty fast paced, very imaginative, very thought provoking. I really enjoyed it.

No time is wasted in the beginning of the book explaining why Mike wanted to live in Dreamworld, nor why Annie has been there for 13 years. I love books that don't waste time with drama like that. When the time was right (towards the end of the book) the reader finds out why. All the questions are answered.

I love that the author narrated this book. I'm sure that no one could have captured it as well as he did.

One of my favorite authors.

Got hooked on Spider reading the Callahan stories. Grabs your head and your heart, with humor.

A little fantasy a little scifi, tumbled together in a delightful story about 2 lost souls that find one another quite by accident. It took me a little while to gather all the threads at the beginning of the book, to understand what was happening and especially where it was taking place, but once it took shape, the story was delightful. I recommend this book, it's well worth an Audible credit.

You start to draw parallels with real life & the world as we know it, before you go far into the book. It has that kind of vividness to it that grabs & keeps your attention completely, till the end. Simply lovely