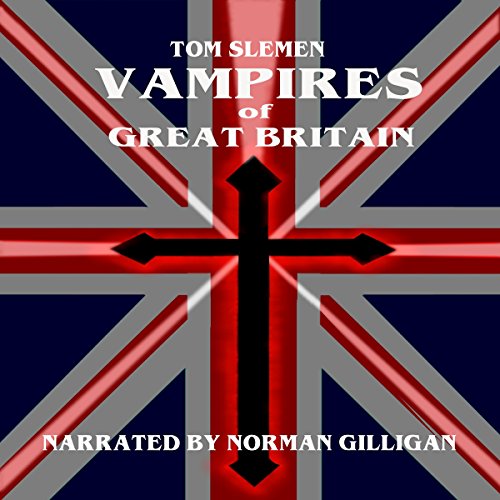 By: Tom Slemen
Narrated by: Norman Gilligan
Try for £0.00

Best-selling author Tom Slemen spent years researching and compiling the stories and reports for this book, which delves into the eternal subject of vampires. If you thought that vampires were only found within the Twilight films and the pages of Anne Rice's books, think again. Tom shows us that they can, and do, turn up in the most ordinary and extraordinary places, from suburban bedrooms, kitchens, disused coalmines and royal castles to an iceberg adrift in the frozen wastes of the North Atlantic ocean.

And if you thought that all vampires had the same modus operandum, think again! It is true that many vampire attacks do fit the classic formula of a cloaked stranger sucking the blood from a young woman victim, and you will find several examples of such attacks in Vampires, but what about those who like to feast on new born babies, or who can change shape at will? Nor do all vampires suck their victims' blood, instead siphoning off their very life force, leaving them drained of all energy.

No - this is not fiction, but meticulously-researched fact. Whether writing about the ancient Egyptian vampiress, Sekhmet, or Black Tom the highwayman turned vampire who terrorised the county of Dorset for over three hundred years, Tom Slemen has the unerring ability to seek out tales of the paranormal and retell them with chilling lucidity. If you are genuinely interested in vampires, and are not of a nervous disposition, listen to this book!

What listeners say about Vampires of Great Britain

This is a must read/listen By Tom Sleman

As a Brummie Born and Bred, yet Tom's "Haunted Liverpool" collection have enthralled me, so as a believer in the existence of these creatures, in one form or another, found it a fantastic insight.