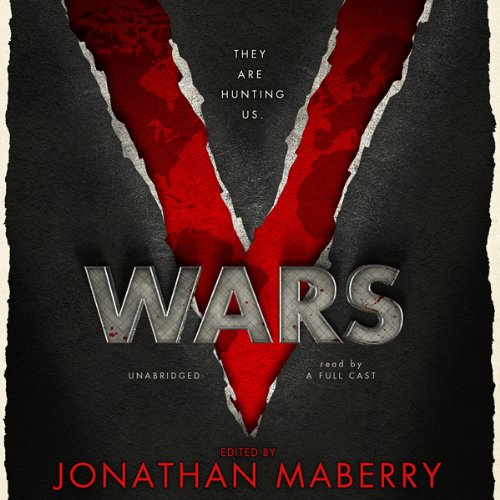 They are hunting us.

In this sweeping, threaded narrative of the global phenomenon known as the Vampire Wars, mankind is unwittingly infected by a millennia-old bacteria unknowingly exhumed by a scientific expedition in Antarctica. Now, in some rare cases, a person’s so-called junk DNA becomes activated. Depending on their racial and ethnic heritage, they begin to manifest one of the many diverse forms of the "others" that are the true basis for the legends of supernatural creatures. These aren’t your usual vampires and werewolves - it goes much deeper than that.

Conceived by Jonathan Maberry, V Wars features stories from various frontlines as reported by such contributors as Nancy Holder, Yvonne Navarro, James A. Moore, Gregory Frost, John Everson, Keith R. A. DeCandido, and Scott Nicholson - as well as Maberry himself, of course. The result is a compelling series of tales that creates a unique chronicle of mankind’s response to this sudden, hidden threat to humanity.

What listeners say about V Wars

As with any collection of stories there is winners and losers. Jonathan Maberrys story and his narrator knock it out the park. Worth buying just for that. Proper scary. That guy has a voice born for horror. Other stories pale in comparison. Not the same quality as World War Z.

I felt that this story had great potential a d K was waiting for it to all come together at the end but all stories just ended. Very disappointing.

A Ringside Seat for the Vampire Wars

I was hesitant to buy this book based on the tepid reviews I'd read. When I finally did listen to it, I wondered what took me so long. I really enjoyed this book, and the varying takes on modern vampires.

This book is skillfully rendered, and despite the many voices and authors, manages to remain thematically consistent throughout. V Wars avoids the typical "good-guy/bad-guy" dynamic, and raises a number of thought-provoking issues.

What I liked about this book was what I found lacking in books like World War Z--character. This book is first and foremost about people surviving in a difficult time, not about monsters. One of the best genre books I've read in some time. Give it a try.

Where is the War?

The concept for this is pretty cool, and that's what got me to check it out. Basically, this is a set of short stories / novellas, that are loosely connected in that they involve a Patient Zero that sets off a virus turning people into vampires. Typically I prefer the Dracula type gothic horror vampire, but this seemed to me for some reason to be more along the lines of 30 Days of Night modern version. That was my perception going in. Either way, they don't sparkle, so I figured it could be fun. Also assumed that as an anthology of sorts, some stories would be better than others. Such is the case here.

There is some excellent character development throughout, and some of it is actually worth it. As to the so-called V-Wars... it's mostly build-up and not enough carnage. To be fair, it reads almost realistically in places, like this could happen this way, and there are plenty of social ramifications explored. Other parts, some characters are way too accepting of the changes rather than panicking, and plenty of explanations are left simply to "we don't know why it happens this way, it just does." At a couple of points, I was left wondering if this was still a story about vampire wars. The whole book isn't disappointing, just large chunks of it. But there was enough to feed my imagination in places that I felt it was generally worth it overall, in small doses. Had this been a single-story novel, I probably would declare it a failed attempt, but anthologies tend to be a little more forgiving since each author has their own take on what they want to explore. I just wish they'd focused more on the overall war. In this case, the microcosm of character study didn't reflect the larger picture as a whole. It's there, just not as in-depth as I would have liked.

First off the many narrators were fantastic! The many different accents, the right amount of intonation and inflection and more all serve to make this a pleasure to listen to. I particularly enjoyed the voicing of "The Ballad of Big Charlie" with its Haitian, Latin, and Caucasian accents.
But what's more is that I found the many stories to be utterly fascinating as they each focused on a different character and how the V-virus has affected them and the people around them. They all felt genuine, with real, approachable problems/lives and reactions when their worlds go topsy-turvy as they start sporting fangs and what not.
I also really liked how the vampire infection is introduced in this world as it's quite unlike anything else I've come across and the author makes a particular effort to ground a far-fetched concept into the realm of science and plausible reality.
I'm a huge fan of the vampire/werewolf genre and I list this entry as up there among my more enjoyable reads/listens.

You Have to Stick With This One.

I ATE LIKE IT WAS THANKSGIVING
If you buy this and you know you will, then you have to stick with it. It had it's ups and downs and some very low downs, but toward the end, you will start to get it. This is a thinking person's vampire series. I AM A VEMPIRE, VEM PIE RR. It gets a little political and at first I wanted to flee, but despite my A.D.D., my brain started to churn. People start turning into vampires and at first, I thought what is the problem, kill them all. As you will learn, vampires come in all different types and many do not kill. In reality you could replace vampire with Muslim. Some Muslims are terrorist, but most are not. Add to this dilemma, the randomness in which certain people change. Your wife, husband, children or parents could become vampires. It becomes a lot more complicated then you would originally expect. HE LOOKED LIKE HE COULD BENCH PRESS NEW JERSEY.

SCUM BUCKET
Here is another reason you want to listen to this: a sequel is coming out in September and the list of authors include; Kevin J. Anderson, Scott Sigler, Larry Corriea, and Joe McKinney among others.

Below is a list of the different stories and parts and the grade I felt they deserved:

Introduction by Dacre Stoker, A-

Junk Part 1, by Jonathan Maberry, A

Epiphany Part 1, by Yvonne Navarro, B

Heartsick by Scott Nicholson, B-

Escalation by Maberry, C (The rest of Maberry's stories are more chapters then stand alone stories. Which is okay, they serve to tie in the rest of the stories.)

The Ballad of Big Charlie, Part 2. B+

Species Genocide by Maberry, A-

The Ballad Of Big Charlie, Part 3, Concluded, A-

Embedded by Maberry, B+

Last Bites by Jonathan Maberry, B+


The Narrators are all first class and help make this an overall 5 star experience.

Fresh approach to the age-old monster!

What did you love best about V Wars?

I really liked the approach that the researchers took in trying to find answers to the V Event. Treating it as within the realm of nature, instead of supernatural.

What other book might you compare V Wars to and why?

The Strain Trilogy by Guillermo Del Torro. Both deal with widespread vampire outbreaks potentially leading to the extinction of humankind. Humanity is fighting for its survival as civilization falls apart.

There are multiple narrators. All are good, but some are better than others.

Yes, but it would spoil the surprise for anyone who read this review before listening to the stry!

It's a great listen for anyone who likes vampires, and stories of apocalypse.

Voices were great, but the voice was bad.

All the narrators, save one, were excellent. It is just the tone behind many of the stories felt really, I hate to say it, racist. Any time a character blamed problems on "The mexicans", or "illegals", there was no tone of disagreement. There were no counter statements. Even 1 character got their happy ending by becoming an "illegals" tracker and government sanctioned killer.

What made the experience of listening to V Wars the most enjoyable?

I really enjoyed V Wars. An enjoyable listen with a good collection of stories woven together over multiple chapters. If you have ever listened to the Wild Card books it is similar to that. It is very different to World War Z, which is told as a series of recollections from survivors. This is told much more as a narrative. I was expecting the former but ended up enjoying the latter.

What would have made V Wars better?

I could not get past the third story, it was really just horribly disjointed maybe it got better, but I just could not continue, not even the narration pulled me in.

May have gotten better after the three I had listened to, the premise was interesting which is why I had picked it. It just didn't work for me.

This is a good book. Not your normal Vampire fair. Worth a credit....but dosen;t not get my stamp as a great book.

Vampires you can believe in, interesting characters and enough gore and horror to satisfy.