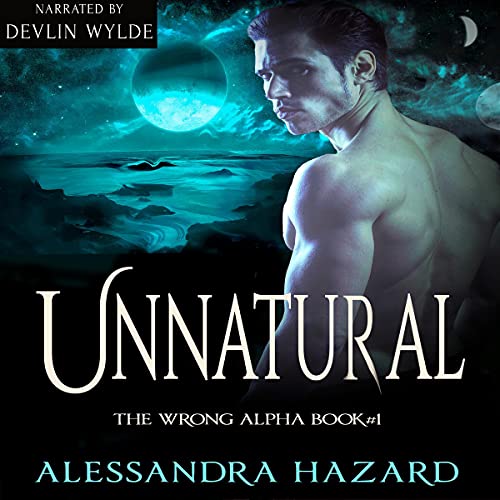 By: Alessandra Hazard
Narrated by: Devlin Wylde
Try for £0.00

A planet at war. Two alphas forced into a political marriage. Attraction that defies all reason and logic.... Or does it?

The Kingdom of Pelugia and the Republic of Kadar have been at war for decades. Peace isn’t popular, but the planet can’t survive without it.

Forced to marry an enemy prince for the sake of peace, Senator Royce Cleghorn doesn’t like his husband, his alpha scent, or his damned pretty blue eyes. More than anything, Royce hates what Haydn makes him become: a primitive alpha cliché, who’ll do anything to mark his territory, even if that territory is his alpha husband. Royce likes omegas; he isn’t into alphas, no matter how pretty their eyes are. It’s just a weird territorial instinct. It has to be.

But when disaster strikes and loyalties are tested, which bond will be the strongest: their marriage, or their allegiances?

This book is set in an omegaverse world similar to contemporary Earth, and it contains mating cycles, two men obsessed with each other, and a happily ever after. While mpreg exists in this world, it's only mentioned.

What listeners say about Unnatural

Thrilled to see this on Audible!

Since I was expecting Ms. Hazard’s next audiobook to be Straight Guys Book 3, imagine my surprise that it was Unnatural! Out of her other two series apart from Straight Guys, The Wrong Alpha series is a major favorite of mine. If you’ve read or are familiar with her Calluvia series, there is a character or two that will be familiar to you, although the story does deal with a completely different planet. It is an ABO universe and although the male O’s can become pregnant, there isn’t any mpreg on-page. The ABO’s revolve around the moon cycle that they were born in, with some Alpha’s being able to shift into their animal form. Since neither of the MC alphas are the shifting kind, that’s something that’s more background information for Book Two. Hayden, an Alpha Prince from one kingdom finds himself in a political marriage with a Senator from another kingdom to unify for peace. The Senator, Royce, claims outwardly to be a Beta, but is inwardly something else. Since it’s a well known fact within their world that Alpha-Alpha pairings just do not work out, you can see where the issues arrive. If you’re a fan of the guys in her Straight Guys series and their obsessive behavior, you will definitely love the obsession that grows between Royce and Hayden and the steaminess that ensues. Alessandra Hazard sure knows how to burn up those pages! I think this is my first audiobook with Devlin Wylde and his voice was perfect! I actually like him more than Joshua MacRae, even though I did have to speed up narration to 1.3x for it to be more comfortable for me to listen to. Highly recommend!

I have read this book twice on Kindle and then listened to it on Audible! I love this story. I hope they get the Caluvia Royals series on Audible, too.

I listened to this book after reading book 2 (twice). I like the story quite a bit, although not as much as book 2. Hayden didn't always seem as sharp and strategic as you would expect from a General in the army. He'd make a good high school social studies teacher. He wasn't stupid. He didn't do stupid things. but he wasn't planning ahead either.

In book 2 we get to know the king better and understand what a truly horrible man he is, which makes Hayden's behavior around his father make more sense, but it sometimes just comes off as weak here.

The narrator's voice is so low that, I kid you not, it made my car speakers buzz with the bass. I had to switch to headphones. At times his pacing plodded a bit. I turned up the speed to 1.10 and enjoyed listening more.

With a voice that low, his female characters don't sound especially natural, but there aren't very many female characters, and those that are don't have many lines. I didn't find it problematic.

Would I listen to it again? Yes, if only to prepare to listen to Feral when it comes out. That story is HOT, and there is a sense of urgency that is often missing in this book. This book does explain the political situation on the planet--which is assumed knowledge in book 2, so some things make more sense to me now.

So. 4/5 stars over all. Recommend. I hope Feral is out soon.

I purchased the book when it was released and as soon as the audio was released I snapped it up! Great book and great audio!

Don't you love it when you find something or/and someone new, you like? Yes! Same for me! Today , I "found" Devlin Wylde , narrator extraordinaire.

His sultry and delicious narration of Unnatural hit me in all the right places. At a speed of 1.30x Devlin Wylde's performance was intimate , engaging , and oh so hot. His voices for Haydn and Royce fit their personalities , were distinctive. Were even better than the ones in my head. Audio production and editing was well done too.

Unnatural is an entertaining audio , I had a enjoyable time listening to it. It has a layered and detailed world building , very interesting lore and myths . This audio is loosely interconnected to Alessandra Hazard other Paranormal Omegaverse series Calluvia. Another excellent read/listen.

Few of the many things makes this story so replayable and exciting are the unique plotlines, social hierarchy, diversity of characters and their unique sexuality traits. As well as, the high levels of steam , romance and the banter ; and the low angst and drama levels.

Yes, recommend it.
Yes, will be re-listening.
Yes, it's worth all the credits.

Omg Alessandra you are the writer of my heart!! Your romances are just my absolute favorite!! I connect with the MCs and I feel the need the love the addiction!! Ughhh and Devlin Wylde omg he’s just as good as Joshua if not better! Love the both. Great picks! Please please please more!!! I’ve read all the books already and can’t wait to hear them all now!! ❤️❤️❤️❤️❤️🙏🏼🙏🏼🙏🏼🙏🏼🙏🏼NEED MORE!! I’m addicted!

I’ve read the book twice and it’s an amazing experience to listen to the audiobook version.
The story is well developed and the attraction between the MC are built gradually, so no instalove.
Since I’ve read all the other books of the Wrong Alpha and Calluvia’s Royalty, I already knew the alien terms and characters, but it’s totally possible to read Unnatural and understand.
I love Alessandra’s books and the second of this series (Feral) is my favorite! I’m looking forward to it’s release!

I love this book. Book was far better than the audio. Reader sounds like a grandfather with a monotone voice.

When I first heard the excerpt of one of my favorite books of Hazzard, I was worried that the narration would be weird, but no, it is excellent.

Have been a fan of the story since the release, and hoping for this in audible.

It doesn’t disappoint. Love it!

AH, thanks for the audio book. Would love to have others of your Just a bit series too.

Loved the book already, the amazing reading made it even better. Pace slight slow but I think it fits the story. Five stars!