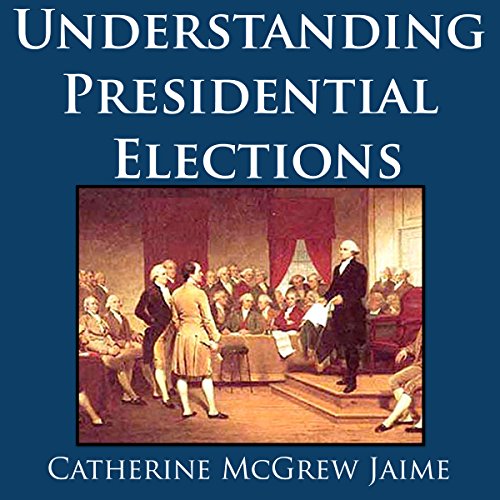 Updated for the 2016 election. Every four years citizens of the United States cast their vote in the election process of their Chief Executive - the President of the United States. But many students and adults alike do not understand the process by which we elect our president. Are we really casting a vote directly for one of them or for an elector, and what is the difference? And going backwards from November, how did those men and/or women end up on the November ballot in the first place? What is the process of a political party choosing their candidate, through this confusing array of caucuses and primaries that have been held? This little book walks through the constitutional background and basis for this critical office, and then goes through the nomination process of caucuses and primaries, ending with the Electoral College process that completes the cycle every four years.


Listening to the audiobook is entertaining as well as educational. I learned more about how elections in the United States are done.

I received a free copy in exchange of my review.

The author makes a sometimes confusung subject so clear. Her information was easy to follow and very helpful. I also appreciated that the author offered other resources for more information.

I did learn some things

Understanding Presidential Elections: The Constitution, Caucuses, Primaries, Electoral College, and More, Updated for the 2016 Election! is an overview of Catherine Jaime’s class or course on America’s political process. Teaching a class and students are mentioned so I came to my own conclusion.

I am not sure what was updated for the 2016 election as nothing was said as such. However, I did learn some things. Such as how the Unites States are a republic by design and not a true democracy as so many would have you think.

I enjoyed the brief history lesson on how our founding fathers had the foresight to structure the system in a way that was as fair as possible and still works to this day. I wish this book was longer and went into more detail about every aspect of Caucuses and Primaries. Because I still do not completely understand the need for them.

Sadly, there were some issues with the audio production, I always hate finding these things. There were several occurrences (some time stamps 3:05, 9:40, 16:43, 36:18, 36:25) of a page turning sound as if David Winograd was reading off of a paper manuscript or maybe it was a rustling, I am not really sure what it was. Then there were several chapter/section headings that began almost on top of the last word in the previous paragraph and was a little distracting. Especially when the section pauses reverted to what I would consider normal. When this happened I found myself checking to see if the book stopped playing.

David Winograd has a very pleasing almost relaxing voice. Personally, I would have preferred an authoritative voice to convey that this book has authority on this subject. Because I was already intune to listening deeply and closely from the aforementioned issues I found that there was a very obvious tonal and sound difference between takes.

Audiobook was provided for review by the author

I was looking to learn more about the electoral college, and this audible explains it all! I wish there were more like this, it goes straight to the point!

Narrator is a snoozer

Good information presented in a voice that will put you to sleep. At least it's short.

the narrator ruins it.

It's a good, quick paced book. But that narrator. Oofff. Ever watch the show Futurama? The character Kip? Yeah they got him to narrate.

Informative and to the point without being drawn out and losing your attention. My children and I enjoyed listening.

Very very easy to listen to! Educating and interesting; this book should be required in every school!

Politics at its Finest!

America is a republic and not a democracy.
I think this is the best point taken from this short novel. As a teacher, the author explains a lot, mainly leading back to the founding fathers, however I did not quite understand some of their examples. At some point it became less of a "understand this system" type of book, and became a "this system would be better if it were this system instead" type of book.