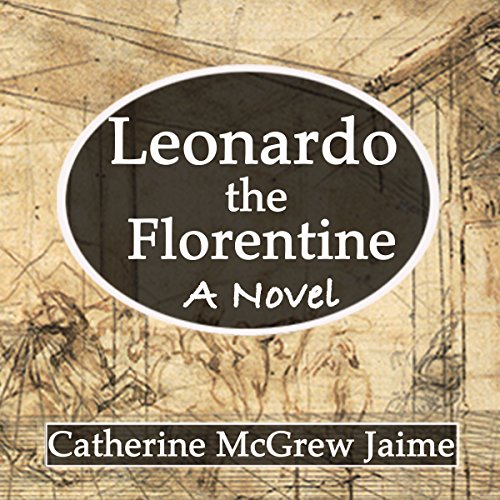 Who are the Medici brothers? And who is trying to assassinate them? Why was the Pitti Palace never completed? And what part did Leonardo play in all of this? Leonardo da Vinci is remembered as an artist and inventor. But who was he before anyone knew his name? This family-friendly novel explores the history and the legends of his early years in Florence. It also weaves a mystery of politics and power. This novel is the first in the series of historically based novels - The Life and Travels of Da Vinci (followed by Leonardo: Masterpieces in Milan and Leonardo: To Mantua and Beyond).

This story felt more like a biography than a fiction. The voice felt distant, as if we were just reading about Leonardo. There were hardly any feelings involved and I just didn’t connect with the characters on any level. Compared to other historical fiction I’ve read, this just felt like a slightly altered biography. Not sure whether this is a fiction or historical nonfiction.

My son was riveted

Would you consider the audio edition of Leonardo the Florentine to be better than the print version?

I've not see the print version so really can't speak to this.

What was one of the most memorable moments of Leonardo the Florentine?

MOM!!! It can't be over yet, it was just getting to be really really really interesting! I want to know more. What happens next mom?

he sometimes over enunciated, making the reading a bit stilted sometimes.

I thought it was a good story. I joined my lad in wanting to know what was going to happen next. I think it would be great to listen to the next part.

we both learned so much, Leonardo Da Vinci was such a fascinating character. we saw the good, and we saw the more challenging aspects of his personality. it was a well rounded story.

This was a good book, even though it felt like more of a biography than a historical fiction novel. It was difficult to connect to the people; ie. Leonardo barely talks to one of his friends and instead of feeling sad for him, I just didn't care. It was not an emotionally captivating novel. On the other hand, the historical aspects were fascinating! Learning about Leonardo's early life, the strains between him and his father and his apprenticeship was very interesting.

Awakening of a brilliant mind

Where does Leonardo the Florentine rank among all the audiobooks you’ve listened to so far?

It's a good audiobook, but read in an even way. I prefer audiobooks with every character portrayed differently.

I liked the portrayal of Leonardo as a real, living boy.

All the scenes involving Leonardo and Lorenzo were very good. My favorite was Lorenzo observing Leonardo grooming his horse.

Yes, it was engaging and the characters were well developed.

A very enjoyable story about young Leonardo meeting Lorenzo, which culminated in creating some of the best artwork of the Renaissance era. Leonardo's thirst for knowledge, quickly recognized and encouraged by Lorenzo drove him to become one of the most enlightened minds of his times.

I loved the relationship between Lorenzo and other apprentices in Master Verrocchio's workshop. The country boy discovers the treasures of Florence, visiting some of it most famous edifices. A touch of politics adds some suspense to the story, but it's not fully developed.

This was a good story about Leonardo growing up and into the man he was.I thought it was aimed more towards children, but I could be wrong.David Winograd was a wonderful narrator.I was provided this book by the author, narrator or publisher.

The solid research that went into this cannot be denied, which I feel is the strongest aspect of this book. The story is not bad but it felt so close toward being an honest biography. I felt like I was learning about someone, not connecting with them. Better narration wouldn't have fixed this issue but it could have helped. The narration felt more at home in academia than fiction. There was no adjustment in pacing, tone, or distinct voices.

This book offers a fascinating depiction of Da Vinci as a youth. A subject about which I'm not sure I've ever read before.

Learned more than from my old arts teacher!

It was a really interesting experience, this book, and very different from my usual reads. I think one of the best things is that I was able to recognize names but then finally feel like I'd be able to remember them, should the subject arise in the future.

I liked the flow of the story and how I could follow Leonardo through his initial years. Catherine Jaime's story feels very educational, and David Winograd, the narrator, has a very clear voice which I felt was appropriate. I will certainly continue the series, because I think Leonardo da Vinci is a very interesting artist about whom the general public (myself included) knows very little.

While I won't ask my tutees to read this book - whatever you try to make kids and teens do backfires, after all - I will tell them about it and recommend it, and hopefully they'll notice how excited I am about this series and then see what the fuss is all about.

The reason I don't give this book 5 stars is because I liked it, but didn't fall in love with it. I think more details about paints, materials and utensils would have made it for me... but then again, perhaps younger readers would find those details to be too boring.

Interesting book suitable for all ages

I really enjoyed this book, which I got in exchange for my honest review. Leonardo DaVinci has always fascinated me, so learning about his early life and influence really appealed to me. The book is written well in an easy-t0-understand and family-friendly format. After finishing listening to it, I thought I might have my 6- and 7-year-old listen to it, since they have studied him in school. I think this book can be enjoyed by any age. I also thought the narrator did a good job. I'm really looking forward to the next book in the series.

Would you listen to Leonardo the Florentine again? Why?

Yes - there are many details to absorb

I felt like I was back in grade-school, listening to my teacher read after lunch...and I mean that in the nicest way possible! This was a good story! Give it a couple of hours and enjoy a delightful transport back in time as you think about what little things happens in a life that lead to greatness! I look forward to more Leonardo stories...

Fun way to learn history and about Leonardo. Can’t wait to listen to next book. I love listening to books while working. It makes the day pass by quickly!