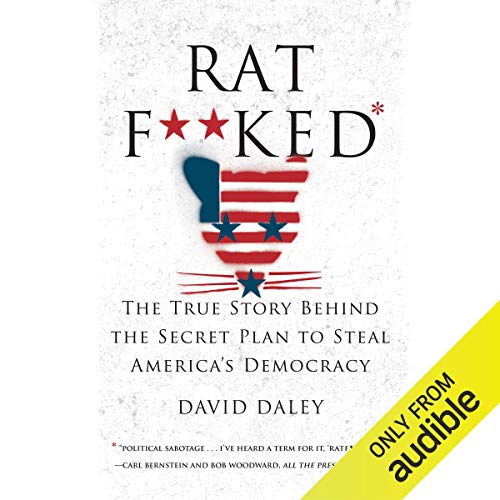 The explosive account of how Republican legislators and political operatives fundamentally rigged our American democracy through redistricting.

With Barack Obama's historic election in 2008, pundits proclaimed the Republicans as dead as the Whigs of yesteryear. Yet even as Democrats swooned, a small cadre of Republican operatives, including Karl Rove, Ed Gillespie, and Chris Jankowski, began plotting their comeback with a simple yet ingenious plan. These men had devised a way to take a tradition of dirty tricks - known to political insiders as "ratf**king" - to a whole new unprecedented level. Flooding state races with a gold rush of dark money made possible by Citizens United, the Republicans reshaped state legislatures, where the power to redistrict is held.

Reconstructing this never-told-before story, David Daley examines the far-reaching effects of this so-called REDMAP program, which has radically altered America's electoral map and created a firewall in the House, insulating the party and its wealthy donors from popular democracy. Ratf**ked pulls back the curtain on one of the greatest heists in American political history.

What listeners say about Ratf**ked

If there has been dissatisfaction with democratic representation for so long, then why the deafening silence? A number of solutions have been presented, presidents from Reagan to Obama have recommended cjange. It is the current system of redistricting that has lead to the fractures and extremism by the inner workings of competition WITHIN the GOP that may lead to civil war.

Skip around; it's vital reading, but may be too much for some

A very important book! The layout of the book is a little lost in audio version, as most of it is broken down one state per chapter. In print I noticed my friends could pick a chapter based on state and read. Going straight through was a little repetitive at times, and it's super important to get to the last three chapters which capture the core learning of the writer. So if you get bored, skip to the last three chapters!

Politicians Should Not Get to Choose their Voters

Ratf**ked shows in stark detail how a shrinking political party manipulated district lines to ensure its long-term control of key US institutions. After the 2010 GOP mid-term wave, party lawmakers gerrymandered districts to cement their party's gains against future election losses. The abuse of redistricting is literally older than the republic, but here took place on a scale so far unseen in US politics. The GOP padlocked itself into statehouses from Florida to Alaska & into an almost unchallengeable House majority. In state after state, the 2014 elections showed that the majority could vote Democrat, but Republicans would still get most of the representatives. The bottom line is simple: voters must be the ones choosing their representatives; politicians should never be allowed to choose their voters, protect incumbency, skew election results, or doom opponents by manipulating district lines.

This is an amazing, eye opening book. It helped me make sense of some political agendas and how they effect the American political processes. I left this book angry, but motivated. Highly recommended.

Daddy, where do partisan bullies come from?

We no longer have compromise. The Republicans want absolute power and set the wheels in motion to lock it in before the last census. They don't care if the popular vote is won by Democrats. They don't have to. We will never get reasonable government until we can repair and replace the gerrymandered disaster that David Daley explains so well.

As the country increases in diversity, the Republicans see their dominance fading and will do anything to maintain Controll. They will do anything possible to block, rescind, or devalue Democratic votes.

This was an interesting, informative and utterly important book - despite the narrator's best efforts to put you to sleep. It would behoove us to end the undemocratic and unconstitutional practice of gerrymandering, lest it ends democracy for us.

If You Feel Like Something's Wrong with American Politics...

This book will illuminate exactly why you have that feeling.

A small and extreme group within the Republican party has somehow gotten disproportionate power in the House since 2010.

This book explains exactly why.

As a nation we need to work hard to find better solutions for apolitical redistricting (nothing will be perfect, but we have to try).

We need a left of center party and a right of center party, or a multi-party system. We don't don't need a wing nut party that paralyzes political discussion and blocks any national problem solving!

This is a great book to read if you want to understand the secret mess US politics is in! It will open your eyes to see what our future challenges will be. Well worth reading.

This is important reading for anyone who cares about the democratic process. Our institutions are being twisted in a way Founding Father's feared. Recovery will not be easy

We live in a plutocracy: an expose on republican gerrymandering

Reading this book will infuriate you if you care about democracy. Big money behind the Republican Party has made possible large scale election fixing.

When politicians pick their electorate, democracy is mirage... a popular myth.

Republicans have the financial muscle to play the long game, using the best minds available.

Democrats look like amateurs in light of this expose.