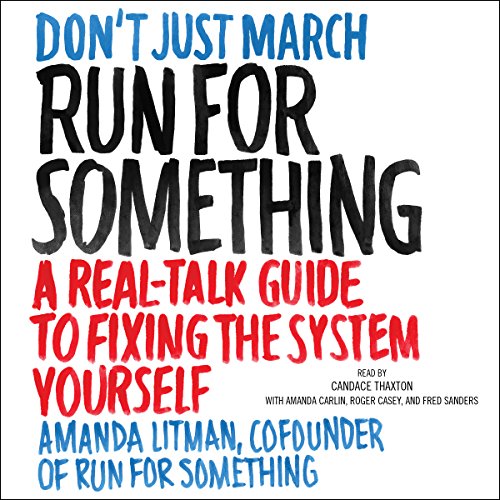 From the email marketing director of Hillary Clinton's presidential campaign and the cofounder of Run for Something comes an essential and inspiring guide that encourages and educates young progressives to run for local office, complete with contributions from elected officials and political operatives.

You've been depressed since the night of November 8, 2016. You wore black to work the next morning. You berated yourself for your complacency during the Obama years. You ranted on Twitter. You deleted Twitter. You sent emails to your friends saying, "How can we get more involved?" You listened to Pod Save America. You knitted a pussyhat. You showed up to the Women's March on Washington. You protested Donald Trump's executive orders. You called your congressman. You called other people's congressmen. You set up monthly donations to Planned Parenthood and the ACLU. You reactivated Twitter (begrudgingly).

Here's what you do next: Run for something.

To be specific: Run for local office and become the change you want to see in the world. Forget about Congress. Forget about the Senate. Focus on the offices that get the real sh*t done: state legislatures, city councils, school boards, and mayors.

It doesn't matter if you don't understand the first thing about running for office, or never even imagined you would. That's what this book is for.

Amanda Litman, experienced in hard-fought state and national election campaigns, is here to give you guidance as well as wisdom and insight from elected officials and political operatives she interviewed for this book.

There are half a million elected officials in the United States. Why can't you be one of them?

What listeners say about Run for Something

I’m volunteering on my first campaign this summer and wanted some tips... it’s really fired me up and given me a great overview of how election campaigns in the US work. Funny author(s)... the Democratic Party bias made me chuckle numerous times.

This book feels like the ultimate Running for Office 101. Litman makes a compelling argument as to why someone should run, or volunteer for a campaign, or entice another person to run. Then she gives an outline of each step, followed by instructions on how to find more specific details for your specific race or jurisdiction. The book also contains essays and anecdotes from various experts who make the case for the importance of local offices. Admittedly, you may benefit from purchasing the hardcopy because you may want to take notes and carry it with you as you plan your next steps. Nonetheless, an excellent resource.

This book has FALSE NARRATIVE

I’m strongly considering to run for city office so I read this book, or as much as I could. I researched the author before I rented the book and knew she was on the Clinton and Obama campaigns and I respected that and felt like that qualified her to advise on how to run for office and when to run for office but instead it isn’t! It’s why you should run for office and that reason is to STOP DONALD TRUMP!!’ He is already our president and she shamed congress for not being able to impeach him. I don’t want to pay to hear her political views. I wanted to pay to learn from her experience on the logistics to run for office! Again this book, this author has a FALSE NARRATIVE

I am completely green to the intricacies of politics and found the book not only essential, but I could not stop listening to this open and honest book... WELL DONE...