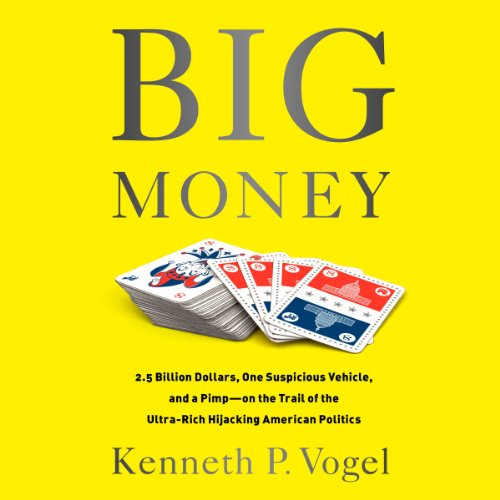 Mark Hanna, the turn-of-the-century iron-and-coal-magnate-turned-operative who leveraged massive contributions from the robber barons, was famously quoted as saying: "There are two things that are important in politics. The first is money, and I can’t remember what the second one is." To an extent that would have made Hanna blush, a series of developments capped by the Supreme Court's 2010 Citizens United decision effectively crowned a bunch of billionaires and their operatives the new kings of politics.

Big Money is a rollicking tour of a new political world dramatically reordered by ever-larger flows of cash. Ken Vogel has breezed into secret gatherings of big-spending Republicans and Democrats alike, from California poolsides to DC hotel bars, to brilliantly expose the way the mega-money men (and rather fewer women) are dominating the new political landscape.

Great wealth seems to attach itself to outsize characters. From the casino magnate Sheldon Adelson to the bubbling nouveau cowboy Foster Friess; from the Texas trial lawyer couple Amber and Steve Mostyn, to the micromanaging Hollywood executive Jeffrey Katzenberg, the multimillionaires and billionaires are swaggering up to the tables for the hottest new game in politics. The prize is American democracy, and the players' checks keep getting bigger.

What listeners say about Big Money

Money & Politics. Not much more.

Would you listen to Big Money again? Why?

This is not the kind of book that I would read a second time. It is an entertaining narrative, but its real value is that it provides a wealth of timely information about a subject that is changing and evolving rapidly. If you are considering purchasing the book, the time to do it is now. If you wait until after the 2014 elections, much of the information will be moot.

The book sets out to explain the way money flowed into US federal elections in 2010 and 2012, and in this succeeds wonderfully. It is a thorough overview and history of campaign finance during this period and is packed with information that helps the reader understand what is and has been happening with money in politics over the past few years. At the same time, the book's focus on campaign finance during a 4-year period is also the its main weakness. The author has an excellent grasp of the ways money flows into politics today, and benefits from access to donors and consultants who are active in this space, but his expertise seems to end there. The book does not provide anything more than cursory, superficial descriptions of the campaigns and political candidates who benefit from the money, or the Tea Party movement, or the issues on which recent campaigns have turned. Further, while the authors hints at ways the influx of big-donor money may translate into influence on policy, this and the other key question about the significance of the conduct documented by the book are never really tackled. Ultimately, I don't believe this is the author's failing, but merely indicative of the fact that the topic about which he is writing is so still new that its significance, if any, is simply not yet clear.

Great read for political practitioners and junkies and anyone who really wants to understand how money is flowing into our politics and where it is combing from. For others, including more well rounded readers, I think the book could be a bit much.