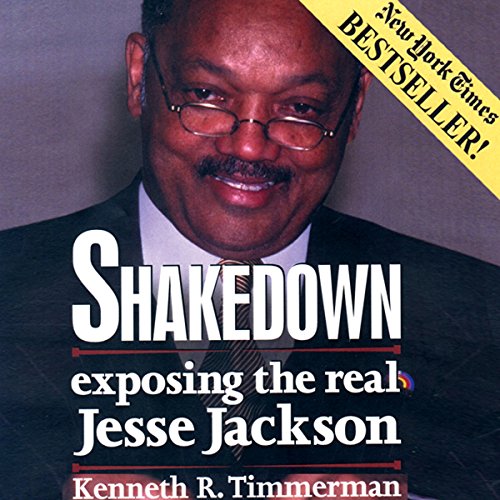 Author Kenneth R. Timmerman exposes Jesse Jackson's life and works, uncovering a sordid tale of greed, ambition, and corruption from a self-proclaimed minister who has no qualms about poisoning American race relations for personal gain.

Few figures have been given such a free ride by the media as Jesse Jackson, but Timmerman has interviewed Jackson, his associates, and his victims to write a courageous and important book that at last provides a full, honest accounting of the life and lies of Jackson - from the streets of Chicago to his support of Yasser Arafat in the Middle East.

Here is the real Jesse Jackson: the man who turned racial grievances into a breathtaking money machine.

The reader mispronounced several words: "silicon valley" as "silicone valley," "David Ben Gurion" as "David Ben Ju-Rion," and most annoyingly, he pronounced "coup" as "coop," which came during several chapters about Africa where he must've used the word a hundred times.

Narrator mispronounc so many words

The book was as I expected, a very thorough (and somewhat repetitive) list of what the author describes as shakedowns.

I have no idea how the narrator / producer (and frankly Audible) felt this was good enough to publish. When listening to a book talking about the overthrow of a government and child soldiers, it is very hard to stay focused when this act is referred to as a 'coop' (where you keep chickens) instead of a coup.
Some of the other mispronunciations are even more confusing, like Robben Island, or referring to Joannes-berg instead of Johannesburg,

There was also at least one point were mid sentence the narrator realized he was still using the voice from quoting a female, instead of retaking the sentence, he just shifted gear in the middle to his usual voice.
There are also a lot of pauses as the narrator tries to work out a word (before often mispronouncing it), more time in the editing booth could have smoothed out a lot of these, and they could also have corrected pronunciation for many of the really obvious mistakes.

I have to think they had underestimated how long it would take to record this audiobook, and didn't have time to fix the problems.

Overall a great book, very interesting.
One drawback to the audio is the narrator's inability to pronounce some words correctly. The first time you think to yourself that he misspoke and it wasn't picked up in the editing process. Then it happens again and again, simple words are mispronounced, examples are "malevolence" pronounced as "mail-volence" or minute as in "minute detail" pronounced as "minnit detail". Every chapter contains at least two or three such examples and it becomes increasingly irritating each time. Otherwise it's worth a listen.

extremely hard to listen to

What did you love best about Shakedown: Exposing the Real Jesse Jackson?

assuming what was presented is thoroughly researched and accurate [and it seems to be] this is a book that all people of all colors should be familiar with.

What was one of the most memorable moments of Shakedown: Exposing the Real Jesse Jackson?

the blatant ways that jesse jackson put himself ahead of anyone and anything.

in every conceivable way. he is unfamiliar with many words but mispronounces them with consistency. it appears he had never pre-read this book and therefore has pauses and mis-places emphasis throughout the performance.

if this book could be available by a different narrator it would be great. many times throughout the book i considered turning it back in and getting a replacement, but the content is so valuable that i am going to keep it. this might end up being a book i will actually purchase in hard copy.

if you can suffer through the narrator, this really will be an eye-opener of a book!

If you could sum up Shakedown: Exposing the Real Jesse Jackson in three words, what would they be?

Would you be willing to try another one of Mike Iykins’s performances?

If you could give Shakedown: Exposing the Real Jesse Jackson a new subtitle, what would it be?

Satisfied with the title

Narrator did not know how to pronounce coup, cause celebre, and many other words correctly. I am surprised that the screening of this individual did not reveal this.