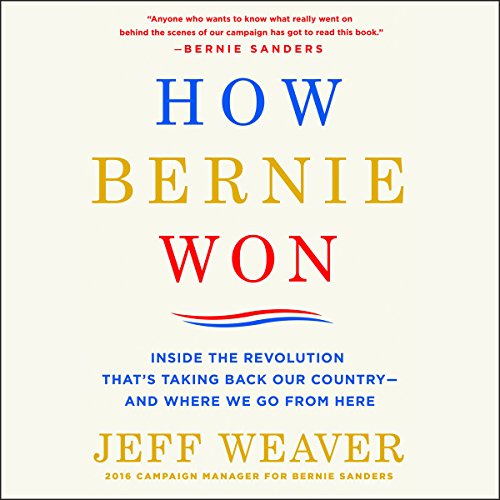 Inside the Revolution That's Taking Back Our Country - and Where We Go from Here
By: Jeff Weaver
Narrated by: Jeff Weaver
Length: 12 hrs and 6 mins
Categories: Non-fiction, Politics
4 out of 5 stars 4.0 (2 ratings)

In this audiobook, the brilliant manager of Bernie Sanders’ 2016 presidential campaign explains how Bernie took on the entire establishment and changed modern American politics for good.

When Jeff Weaver hopped in a car with Bernie Sanders in the summer of 1986, he had no idea the Vermont backroads would lead them all the way to the 2016 presidential campaign.

In How Bernie Won, Weaver tells listeners how Bernie built a movement that would sweep America and inspire millions. He vowed not to run a negative campaign. He would focus on policies, not personalities. He would not be beholden to big money. He would actually make America great.

Weaver also explains how they overcame significant challenges: a media that thrived on negative campaigns. A party that thrived on personalities. And a political system that thrived on big money. Weaver explains how Bernie beat them all and, in doing so, went from having little national name recognition when he entered the race to being one of the most respected and well-known people in the world by its end - because, Weaver argues, Bernie won the race.

He moved the discussion from the concerns of the 1 percent to those of the 99 percent. He forced the Democrats to remember their populist roots. And he showed that an outsider with real ideas and ways to get them done was more popular than someone propped up by backroom political sugar daddies.

From holding bags of “Bernie buttons” and picket-stick signs, to managing thousands of campaign workers, to looking ahead to 2020, Weaver chronicles the birth of a revolution that didn’t end in November 2016. It’s only just begun.

How refreshing to hear someone in the historic campaign, state on record some of the cheating and rigging we endured. It would take 10 books to recount it all; however, I’m pleased. The acknowledgment of the anti Semitic statements and “pied piper” Trump strategy is a relief to hear. As someone so involved in the movement, I’ve often wondered if Bernard knew these things. If he was privy to them. Or if he’d simply rather not know. I felt like Weaver took my own words for the ending. The “Democratic” Party better get Democratic or without question, we will lose again. I strongly suggest this book to everyone- regardless of who you supported. It’s an educational lesson on the establishment getting away with cheating.

I tried to listen to this but kept on falling asleep. As a Bernie supporter I was very familiar with Jeff Weaver, and I think the story is fascinating but the writing is dry and the narration is monotone. I have great respect for Jeff Weaver as a campaign manager but he should have gotten somebody else to narrate this.

Excellent book if you want to get good background on the political process and the challenges of a presidential campaign!

Brilliant behind the scenes tour of Bernie 2016

Thank you, Jeff, for sharing your insights and experiences working on Bernie Sanders campaigns through the years, and especially the fascinating and historic bid he made for president in 2016. I particularly enjoyed the behind the scenes perspective of what it was like for you as his campaign manager to go through the highs and lows of the campaign. Excellent read!

good but editors should look at it again

really rough editing at points, the tempo often gets shifted in a confusing/poor way at times

That was not what I expected

I expected this to be more of a book about Bernie than the inner workings of the Democratic Party, and why we keep losing. Really eye opening and needed to be said. I'm a senior citizen who has voted for Democrats my entire life and I'm so disgusted with the Democratic Party & where it is now. In fact the only reason I'm still a registered Dem is because I live in one of those closed primary States.
Jeff's observation about closed primaries and how they let Republicans interfere with our primaries, more than if we had open primaries, especially for those of us in red States, was very thought-provoking and spot-on.
I'm glad you wrote this book Jeff- this is a story that needed to be told at this moment in time.