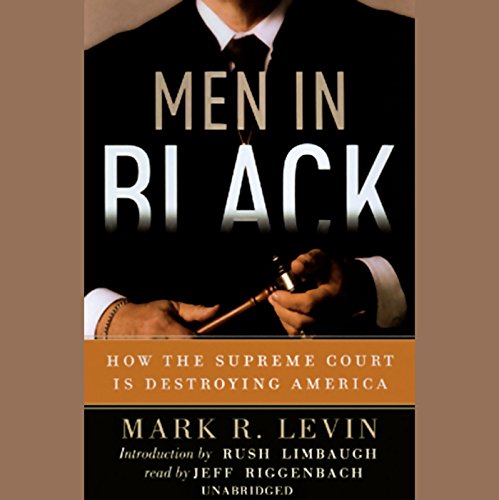 By: Mark R. Levin
Narrated by: Jeff Riggenbach
Try for £0.00

The Supreme Court endorses terrorists' rights, flag burning, and importing foreign law. Is that in the Constitution? You're right: it's not. But these days the Constitution is no restraint on our out-of-control Supreme Court. The Court imperiously strikes down laws and imposes new ones purely on its own arbitrary whims. Even though liberals like John Kerry are repeatedly defeated at the polls, the majority on the allegedly "conservative" Supreme Court reflects their views and wields absolute power.

There's a word for this: tyranny.

In Men in Black, radio talk-show host and legal scholar Mark R. Levin dissects the judicial tyranny that is robbing us of our freedoms and stuffing the ballot box in favor of liberal policies.

If you've ever wondered why, no matter who holds political power, American society always seems to drift to the left, Mark Levin has the answer: the black-robed justices of the Supreme Court, subverting democracy in favor of their own liberal agenda.

Decades of judicial activism have made the Supreme Court the most potent threat to American freedom. Men in Black, as Rush Limbaugh writes in his introduction, "couldn't be more timely or important, as liberals continue shamelessly to thwart the people, Congress, the president, and state governments by using the courts to dictate national policy....Men in Black is a tremendously important and compelling book."

It could very well be the most important book you hear this year.

What listeners say about Men in Black

A much needed warning in a time when a self-anointed elite believes that they can rule over us, without any accountability or feedback.

Mark Levin treats us to an excellent argument against the subjugation of America to nine Justices. Among his chief arguments are the following: Judges are no wiser than their fellow men; Judges should refrain from making policy decisions because they are exempt from the elective control; and Common Law is a perversion of Constitutional checks and balances.

Some reviewers are correct: You can have a good sense of this work before hand, but people, who have heard Levin's radio show, will be pleasantly surprised at the calm, rational discussion in the work. A professional reader adds as much, but this work is far from the incendiary provocation that Democrats assert. To them, the real crime is the shattering of the legal analysis (or lack of it) and holding of Roe in "Death by Privacy."

Would his thesis require releasing some 'rights' acquired in a 'Living Constitution?' Sure, but should we not expect our government to operate within its framework? After all, the Framers provided provisions and methods to amend the Constitution.

Of course, the Framers of the Constitution were far from a uniform body of people. (Alexander Hamilton sought a strengthened federal government and was deeply opposed by Thomas Jefferson.) However, Levin simply presents the words of Justices to prove his case. Doubt me? Take a look at the online retailers that provide previewable sections.

It’s a work that I think everyone should “read.” I would also recommend that all political junkies check out the following works:

Ron Chernow’s Alexander Hamilton (only abridgement I’ve liked);
Bill Clinton’s My Life;
Jimmy Carter’s Our Endangered Values (Although you’ll want to read it because apparently chose to read it with a mouthful of marbles. I will never know how it won an audiobook award.);
Tom Delay’s No Retreat, No Surrender;
And John Stossel’s Give Me a Break.

Great book by Levin and a learning experience for me that I am grateful for.

However, I'm through with Jeff Riggenbach and I will not listen to him again. It's a shame for me since he narrates so many titles that interest me.

He mispronounces Mark Levin's name. Even worse, he mispronounces David Souter's last name. How can you read a book about the Supreme Court and not be aware of the current justice's?

I had long suspected that this reader really doesn't know what he is reading; that he merely pronounces sounds (meaningless-to-him) with dramatic enthusiasm. This ignorance of David Souter makes the case. No more Riggenbach for me.

Blackstone: please send Mr. Riggenbach to another section of your library -- give him material that he can understand.

Mark Levin has been involved with the law since he was 21 years age or so. His explanations and insight have changed my mind about our Supreme Justices. His assumptions of "legislating from the bench" have really opened my mind. I am on my second reading of the book. I have already found stuff I missed in the first reading. I highly recommend this book to anyone who has the stamina to listen to every word.

First off, Levin is Rush Limbaugh's lawyer, so know what you're getting before you buy.
Beyond that, I think he does a good job defending his viewpoint that the originalist take on the Constitution is the proper one. If one looks at why Justice Ginsberg and Justice Thomas are almost always on opposite side of issues, this book does a good job of defining why Thomas takes the side he takes, and no consideration is made to defend Ginsberg.
Because Levin has such a problem with those who subscribe to the Living Constitution arguement, don't expect a defense of that at all.
Overall, I think it is good for what it is. Read it like you would a long editorial in a newspaper.
If you look at the law conservatively, this book my help you understand the legal defense of that view. If you are more liberal, this may at least help you understand why the other side sees things so differently.

I came in neutral, but with interest because of the current discussions in the media. I judge that Levin treats this subject fairly and with a lot of knowledge that it takes years to accumulate. No doubt this is on the conservative side of neutral, but still fair. To someone else?s commit about limiting the Government, the Supreme Court is just as much a part of the Federal Government as the other two braches and also needs to be limited. If you didn?t get that the first time, go back and listen again.

It is clear to me that the author's perspected was of the conservative nature. The book was clear and contained minimal amounts of extreme bias. The historical introduction was informative and enlightening. This is a great read for high school seniors who are getting a short and shallow introduction to the judicial branch of government. The frank and open challenge to the concern of legislation from the bench will cause people from both sides of the political aisle to pause and reconsider furthering the ability for Justices to use their opinions to establish president for agendas not balanced by the other branches of the government. Whether a Justice in an activist or constructionist does not seem to be a focus of the common citizen. Maybe it should be! This book caused me and those who read the book along with me to pay closer attention to the motives from which Justices are chosen.

Score one for the little guy

Good reading / Listening. Sometimes gets a bit technical on the legal side, but this is what we should all be paying attention to. Forget reading some of the "news" that's being fed to us as truth. Look at the FACTS.

I have been engrossed in politics since 2001 ... 3rd quarter, if you catch my drift ... but I learned A LOT from this book. If you care about your America, this is a must read!

Very informative and interesting, but sounded like a legal memoranda. Thought provoking.