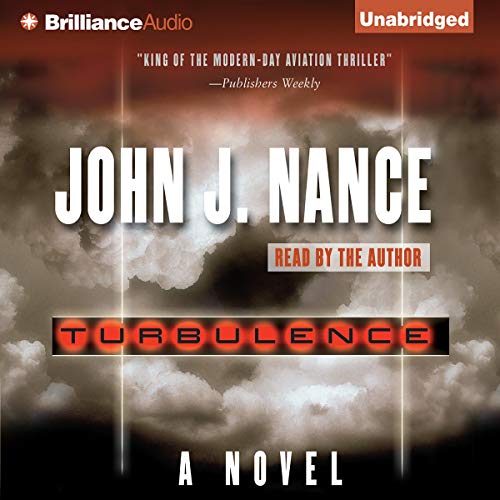 The passengers of Meridian Flight Six - delayed for hours and mistreated by rude and inept airline personnel - have been pushed to the edge. When Captain Phil Knight makes a forced emergency landing in war-torn Nigeria, abandoning his co-pilot to certain death, violence erupts inside the airplane as the enraged passengers attempt the first-ever commercial airline mutiny.

But what they don't know could kill them: The unscheduled loss of radio contact has led NATO and the CIA to believe they have been hijacked by terrorists and must be carrying a deadly chemical weapon into the heart of Western Europe. In the pressurized last moments as Flight Six approaches, NATO scrambles to uncover the truth about the plane's cargo, while Navy pilots bring the 747 into their gun sights and the lives of innocent passengers hang in the balance.

What listeners say about Turbulence

Don't normally review books but I'm bit annoyed with the 1 star review of this book so I had to say something. Ok, granted there may be a few technical inaccuracies but at the end of the day it is a work of fiction so what does it matter? That doesn't in any way take away from the fact it is an exciting, tense thriller that had me wanting to listen to more to hear what happened next. Would thoroughly recommend. Good narration too, and it feels like a 'treat' to hear it read by the author himself.

What disappointed you about Turbulence?

If the author can't be bothered to keep his factual excursions correct within a piece of fiction, then I don't know why that's good enough. A quick Google would have addressed many of the plot errors.

There are NO spoilers:

We have the mysterious case of the disappearing business class cabin. One moment a flight attendant is passing through the curtain between business and first class, and a few minutes later passing back through the curtain from first to coach. This happened a couple of times in the book.

And how do we have the captain noticing that cruising altitude of 37000 feet has been reached, and then passengers looking out and 'marvelling at Big Ben and the Houses of Parliament'?? That's a hell of a climb path out of Heathrow. Passengers are then treated to the sight of Stonehenge (again from 37000 feet). So, tracking due west when due to be taking a southern route towards South Africa. This is then followed a couple of minutes later by the views of the White Cliffs of Dover as they depart the UK. HUH? That's some very wierd flight path......

Would you ever listen to anything by John J. Nance again?

No, I'm afraid the narrator had too much of a lisp to not be a continual distraction.

Would you be willing to try another one of John J. Nance’s performances?

Anger, at how little effort was apparently put in to a coherent plot, on the presumption that readers would be meant to be too stupid to notice?

The author seems to be in a real snit with the airline industry, and the decline in service standards. The point is laboured over and over again in the book, with un-necessarily tense passages lamenting the same point.

Excellent John Nance! Will keep you at the edge of your seat. Very timely writing with the airline situation as it exists today!

If you have not listen to a John J. Nance book you’re out on a great audio experience!

Turbulence was an amazing ride on what some air carriers have become but it’s more than that. It a story about snap judgements , bad decisions and overreactions by almost all aboard and on the ground.

Most author’s shouldn’t narrate their own material but John Nance brings his story to life and could have a full time career just narrating for other authors.

If you can’t tell by now, I thoroughly enjoyed it as well as Headwind and Blackout.

Good story... Poor narrator! Narrator seems like he is in a big hurry to read through story... Few pauses between paragraphs or trains of thought... You cannot mentally see pausing at commas...