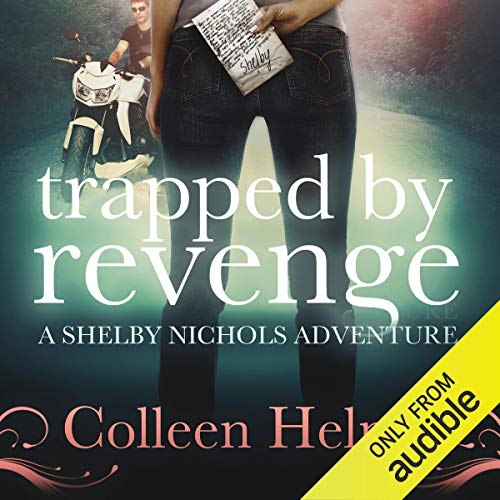 How does a mind reader get framed for murder?

Working for a mob boss might have something to do with it.

Join Shelby in this fast-paced mystery thriller, where proving her innocence and catching a killer will take more than her mind-reading skills.

She'll have to rely on friends from both sides of the law to clear her name.

Even then, she finds that her quick wits might not be enough to save her from becoming entangled in a sinister plot of revenge.

Can she find her enemy before she ends up in jail for a murder she didn’t commit?

Get this book and find out.

What listeners say about Trapped by Revenge

Another exciting mystery for Shelby to solve! With the very talented Wendy Tremont King bringing the wonderful characters to life.

Best noveel so far in a great suspense series!

Trapped by Revenge, Volume 5 in the 10 novel Shelby Nichols Adventures humorous suspense modern detective series, has even more intense suspense than the earlier novels without sacrificing any of the humor/fun. Shelby is charged with first degree murder and her cop friend &quot;Dimples&quot; Harris is unable to help. Another major character, a newspaper reporter, is added the fabulous stable of characters. Shelby's lawyer husband plays a bigger role than in earlier series novels. Shelby's friend Ramos, a mob hit man and enforcer, continues to play a major role. Author Colleen Helme continues to demonstrate that great character development, intense suspense, and laugh-out-loud humor go together well. Wendy Tremont King narrates beautifully.

I love this series and wish more people had the great fortune to listen to it.

The most exciting and breathtaking adventure yet!

In Trapped by Revenge, the darkest and most thrilling Shelby Nichols adventure yet, our heroine is in deep trouble. As usual, through no fault of her own, Shelby is the first on the scene of a murder… and not just any murder, the murder of a private detective, and he’s got her name on his notepad!

With a series of twists and turns, an exciting subplot that runs throughout this adventure and Shelby winding up in jail for murder, this book will keep you listening for hours on end.
The narration by Wendy Tremont King is spot on as usual. Wendy IS the voice of Shelby Nichols, and characterizes our mind-reading soccer mom turned detective and consultant perfectly. Wendy’s forte, in addition to expertly capturing Shelby herself, is expertly and believably capturing the voices, inflections and intonations of the other characters in the story. She is particularly good at voicing the different male characters, such as husband Chris, Hit Man Ramos, and mobster turned maybe not so bad mobster after all Uncle Joey.
Colleen Helme is undisputedly at the top of her game once again with Trapped by Revenge. This thrilling ride through Shelby’s life features a crooked judge, a man on death row about to be executed, and a detective in the police dept. determined to nail Shelby for murder.

This complicated and complex piece will captivate you and leave you breathless for more as you make your way through the story. The action builds to a crescendo near the end of the book, when we finally find out if Shelby will end up on death row or go free, whether the falsely accused man will be executed, and if the crooked judge will be caught.

Throughout the book, there is a new developing relationship between detective “Dimples” Harris and Billie-Jo the investigative reporter who is on her own mission.

So there is a lot going on in this book, and you will love every minute of it, and be glued to your speakers or headphones for hours and hours of non-stop action, wry comedy, and the thrill ride of Shelby’s latest adventure.

This is the 5th installment in the Shelby Nichols adventure series and I would recommend this book to anyone that loves an adventure, loves a good detective read, and especially is a fan of Shelby Nichols or for that matter Colleen Helme. The more books Colleen writes the better she gets. The characters are deeply realistic and expertly depicted. The characters are so well portrayed that you will feel as if you actually know them. Shelby is a very good person, a very moral person, and she feels very badly when she has to tell lies to protect her mind-reading secret. She is deeply in love with her husband Chris, and must resist temptation with a sizzling hot hit man that has fallen for her. So you’ll encounter a lot of dilemmas and a lot of difficult and realistic choices that Shelby encounters as she goes through this exciting life of hers.

A long time ago I stumbled onto Carrots, the first book in the Shelby Nichols adventure series. While normally not the kind of book that I would listen to or read, Carrots drew me in. Colleen’s wonderful and talented descriptive writing captivated my attention and my imagination and has never let go.

I continue to enjoy the development of characters and the laughter this series offers. The heroine is lovable, smart and try's very hard to do the right thing. Must try one of the books in this series!

What did you love best about Trapped by Revenge?

I love how funny the lead Shelby can make a crazy problem seem so real.

When she finds the body and is freaked out (rightfully so!) Not acting like its no big deal.

I can hear YOU!

A light FUN read. and that is sometimes Exactly what you need.

This is a great little discovery. Enjoying them. Good narrator as well. Would recommend reading or listening to them

a other fun book that ties in beautifully withe the prior books. Narration is spot on , Wendy King just nails it. Gangsters, crooked judges, bigoted police detectives, are just a few of the twists and turns. FIVE STARS!

Shelby had me laughing like a loon or anxious over her safety. The characters are so real! What a writer!

I would. In fact, I already have recommended. Shelby is growing so much as a character. When reading a series of books, I love having a character change and become more confident in themselves and their abilities. And Helme makes it happen.

I love Ramos and Shelby and how well they work together. I have greatly enjoyed how their friendship and partnership has developed over the series.

This book was such a fun audiobook that I finished it in 2 days. I couldn't wait to get back to "Trapped by Revenge" every time I had to put it down. I can't wait to see what Colleen Helmes has in store for Shelby.

Yes, the book was impossible to put down.

Ramos, because he reminded me a bit of a Ranger from Janet Evanovich's Stephanie Plum series.

What about Wendy Tremont King’s performance did you like?

Her unique voices for each characters. Not only were the distinguishable, but they were just how imagined them sounding.


Ever since Shelby went to a grocery store to get carrots and got shot, nothing in Shelby Nichols’ life is ever routine or boring, especially with her mind reading abilities caused by the grocery store incident. When Joey “The Knife” Manetto, aka Uncle Joey, asks Shelby to go listen to a private investigator named Sam Kilpack’s thought s, she arrives at the man’s office only to find him dead. To make matters worse, someone’s trying to frame her for Sam’s murder. Her husband’s gun was used as the murder weapon and her fingerprints were all over it. It Shelby hadn’t taken the note that had her name on it and the pen Sam had written her name with prior to his death, she’d be behind bars. When Shelby discovers that another man by the name of Jim was found guilty of killing his girlfriend, she finds out that his girlfriend’s murder has the same M.O as her case. Unfortunately, he’s set to be executed in just a few days. Could the two cases be connected? Will Shelby and her husband, Chris, be able to clear her name, find the real killer, and save herself and Jim?

This fast-paced, gripping mystery was a treat to listen to. Narrator, Wendy Tremont King’s voices are unique and easily distinguishable. The plot is filled with twist and turns that King handles with ease. The intrigue, suspense, and mystery of the story are well-blended and easily hold the reader’s attention. The characters were well-developed and entertaining and the dynamic between them was humorous and engaging. The narrator’s and author’s pacing complement each other perfectly and are well-suited. Listeners who have read or listened to the other Shelby Nichols adventures will have an easier time understanding what is going on, but this could be read out of order. People who enjoy mystery, adventure, humor, and suspense will thoroughly enjoy listening to this series.

Where does Trapped by Revenge rank among all the audiobooks you’ve listened to so far?

This is one of my favorite mystery/adventure series. I love all the characters and the narrator does an excellent job with the pacing and voices.

What other book might you compare Trapped by Revenge to and why?

This one is a tough question because I think the storyline for this series is very original but my guess would be Jana DeLeon's mudbug series but without the ghostly elements. The humor, fun, mystery, and adventure is all present though.

What does Wendy Tremont King bring to the story that you wouldn’t experience if you just read the book?

The great character voices! She nails the voice of Shelby and the accents for some of the other characters are hilarious.