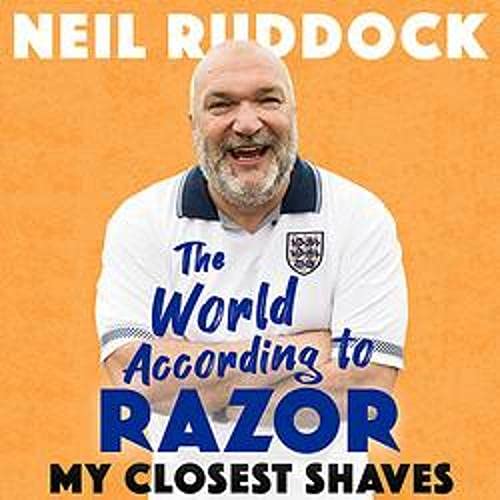 The World According to Razor

If you were expecting to read Razor's views on politics then you're going to be disappointed. Anybody who wants to read that needs help! This is yours truly talking about some of the experiences that have helped to create the absolute legend that is moi. Some of the tales involve a bit of mischief, and most involve a drink or two. Most importantly, though, they're all a bit of a laugh, so I'd settle down and have yourself a nice little time.

The two things Razor Ruddock can't resist in life are a pint and a dare. That and 17 years as a professional footballer under his belt means he's got a story or two to tell. Chickening out of a fight with Eric Cantona, robbing Alan Shearer's minibar, cinema trips with Gazza, becoming mates with Ian Wright - Razor has seen and done it all.

Packed full of hilarious anecdotes, Razor gives us his take on the beautiful game, sharing his tactics (good banter is a defender's duty), red mist (and red cards) on the pitch, run-ins with the FA and his theory as to why Ingerland never does as well as we'd like, as well as his best ever goal and the greatest night of his sporting life.

Razor also lifts the lid on his bad reputation and reveals his regrets, his heroes, his greatest fears (notably upsetting the missus) and what it takes to make Britain's hardest footballer cry. Poignantly, he shares his views on the importance of family and his concerns over footballers' mental health. And the biggest surprise of all: that he was a shy and retiring young lad (and that his love of swearing comes from his mum).

With his trademark sense of humour and foot-in-mouth disease, The World According to Razor is like having a pint down the pub with Razor himself.

What listeners say about The World According to Razor

Really enjoyed it, funny and honest

the best autobiography about a footballer I

have read/listened to by a country mile. !

Hilarious from start to finish. Roared with laugter many times listening to this. Razor Ruddock is a legend and I could have listened to this for hours and hours more.

Absolutely great listen, so many stories in this book that had me laughing out loud, definitely worth a listen!

I've got as far as chapter 20 something I think but stopped listening as its starting to get a bit boring now. It's good fun to start off with, but a bit predictable (drinking...fighting...thick footballers...'banter'...famous name drops etc).

Expect the usual football stories with the usual clichés attached.

Worth a credit but you'll know what you're getting if you're considering purchasing.

Really gave this book a chance but Razor’s stories become tiresome and follow the same pattern. One to avoid unless you are a super Razor fan.

Enjoyed, only downside was not having ruddock narrate the whole book.
Still worth a listen if you like the old storys.

Would of been a lot better if Razor was narrator

Not for the fainthearted if you don't like the f bome, the c word this book is not for you.
Near the mark, open, honest, funny self indulgent entertainment. Nice one Razor

shite To much swearing, dirty talk not even neil razor ruddock full of shite rude man.