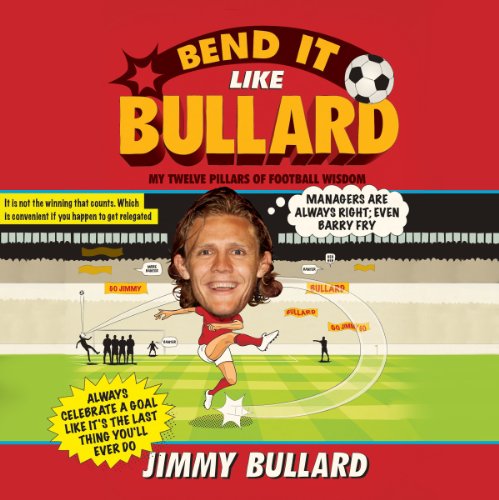 By: Jimmy Bullard
Narrated by: David John
Try for £0.00

A rip-roaring, life-enhancing, hilarious memoir from a football cult hero

Jimmy Bullard may not have had the perfect hair-do, his Granada Ghia may not have been the flashiest of cars, and he definitely didn't have a string of Page 3 girls trying to sell kiss and tell stories about him to the tabloids. But what he has in spades is a genuine love for The Beautiful Game that few of his peers can match.

One of the last graduates from football's old school, Jimmy actually worked in the real world - including as a painter and decorator - before turning pro. Maybe that's why he played football with a smile on his face, always says what's on his mind, and is no stranger to a spot of mischief.

Having played under the likes of Barry Fry, Harry Redknapp, and Phil Brown, appeared alongside names as diverse as Neil Ruddock and Paolo di Canio, and as long as Jan Vennegoor of Hesselink, Jimmy has racked up an amazing collection of tales and pranks both on and off the football front-line. Told with candour, Bend It Like Bullard is the extraordinary story of his journey from cable TV fitter to cult hero. It will make you smile, chuckle and, occasionally, ROFL.

This book is garbage, it’s like some one has taken a thesaurus out and replaced every normal word with a waffle word. Avoid

What a player and what a character.

Funny stories and insight into career as a footballer. Shows you the high and lows of his career and what comes after. Really enjoyable. Definitely recommend.

Very enjoyable if you knew of Jimmy's antics before reading. I wish he was abit more in depth regarding his childhood etc. This was more a focus on his key football points which is great, I enjoyed it and wanted to read more!

excellent Jimmy!! what about that time you were a top footballer and lethal with a dead ball? Top man, top book

Funny, witty and a great insight to football. Fantastic listen. Brilliant read by David John and a fantastic story by Jimmy

Most of the content was common knowledge even for the least familiar bullard fan.

The mockney presentation made his eccentric style just come across as irritating.

funny from start to finish

loved it , great book for a great football player. a must have book. 👍🏻

Made me laugh & cry all the same time. A character of real strength and a shocking account of football culture and the changes in the modern game but are they good or bad you decide!

Bullard is a legend

Bullard is a legend....... in his own right that is. Ok he wasn’t the next big thing but he was the last of a dying breed of footballer, the last of his kind and for that he is a legend. This book had me laughing out loud as Jimmy recalled his dressing room stories, on the pitch antics and his all round love of the game. A great read for any football fan.

great read, the narrator was perfect for the book also, good old jimmy Bullard, his life matches his persona