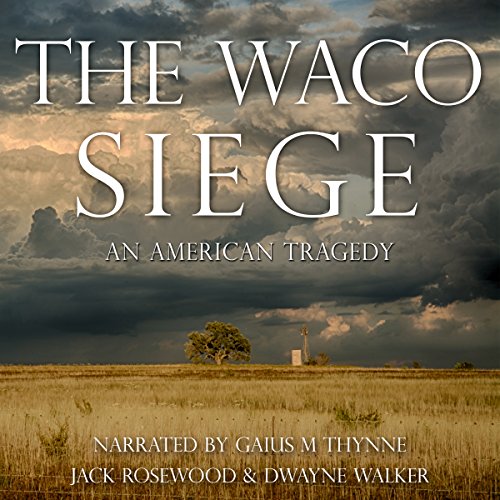 The Waco Siege: An American Tragedy

The Waco Siege: An American Tragedy

During 51 days in early 1993 one of the most tragic events in American crime history unfolded on the plains outside Waco, Texas. An obscure and heavily armed religious sect called the Branch Davidians was barricaded inside their commune and outside were hundreds of law enforcement angry because the former had killed four ATF agents in a botched raid. Go on an engaging and captivating ride to examine one of the most important true crime stories in recent decades. Hear the shocking true story of how a man the government considered a psychopath, but whose followers believed to be a prophet, led a breakaway sect of the Seventh Day Adventist Church into infamy.

You will follow the meteoric rise of the Branch Davidians' charismatic leader, David Koresh, as he went from an awkward kid in remedial classes to one of the most infamous cult leaders in world history. But the story of the Waco Siege begins long before the events of 1993. At the core of the conflict between the Branch Davidians and the United States government were ideas and interpretations of religious freedom and gun ownership, which, as will be revealed in the minutes of this book, created a considerable philosophical gulf between the two sides. David Koresh and the Branch Davidians carried on a long tradition in American and Texas history of religious dissent, but in 1993 that dissent turned tragically violent.

You will find that beyond the standard media portrayals of the Waco Siege was an event comprised of complex human characters on both sides of the firing line and that perhaps the most tragic aspect of the event was that the extreme bloodshed could have been avoided.

This book will make you angry, sad, and bewildered; but no matter the emotions evoke, you will be truly moved by the events of the Waco Siege.

Will not and could not give this book a positive review. The narrator sounds like a robot, to include saying that the event took place in “1934”. There was no flow and is a waste of money.

The story is fascinating.


Within the first chapter, there’s a half dozen words that are just pronounced wrong. It detracts from the validity of the piece.

Did The Waco Siege: An American Tragedy inspire you to do anything?

Interesting. They should have done a pre read and made sure reader had all the words down.

Not in depth. No interviews of those involved. doesn't touch on the why of the Waco confusion at all.

I wanted to learn about this, but...

This is the WORST narrator I've ever heard and I can't take any more after only 14 minutes. Marbles in his mouth, nasal, weird pronunciations of words, weird inflection and terrible enunciation. Weird pauses where you think the sentence is done, but no! He has pronounced Davidian 3 different ways so far and sometimes I can't tell what the heck he is saying. He says sects like sax. Have fun!

The Waco Siege: An American Tragedy by Jack Rosewood and Dwayne Walker was a great read. It follows what lead up to the most tragic fifty one days in the early months of 1993 in Waco, Texas. The Branch Davidians were barricaded inside their commune with law enforcement outside. This was a great book that told of the events of the siege.