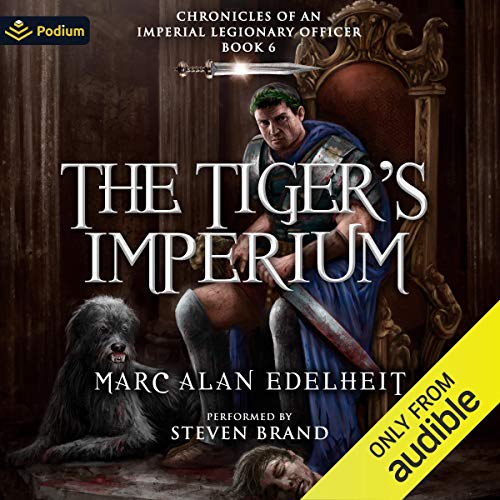 By: Marc Alan Edelheit
Narrated by: Steven Brand
Try for £0.00

The sixth instalment of the award-winning Chronicles of an Imperial Legionary Officer series.

Ben Stiger, Legate of the Lost Thirteenth Legion, a nobleman from an infamous family, and born fighter, has defeated the enemy army before Lorium and raised the siege of the city. Mortally wounded and dying, the emperor has made Stiger his heir, but in name only. The senate and the church must confirm and anoint him. Will they want a Stiger on the throne? Or will they choose someone else?

Hundreds of miles away, the Cyphan Confederacy’s armies are marching along the coast, moving inexorably toward the capital, leaving a swath of destruction in their wake. To save the empire, Stiger must leave his army behind, travel to the capital, and confront his father, who is in command of the legions defending Mal’Zeel. Stiger must secure his throne, for it is his destiny and burden to bear. Another must not be allowed to claim the crown of wreaths and the curule chair. For should that come to pass, everything Stiger has worked toward will be lost, and darkness, like a shadowy veil, will forever fall over the world of Istros.

Stiger has finally accepted the mantle of Champion for his god, the High Father. He has come to accept being made emperor, a job he never wanted, and being seen by his men as gods blessed. But has he truly been blessed? Or has Stiger been cursed to a terrible destiny?

The final battle to save the empire and the world has begun!

What listeners say about The Tiger's Imperium

Another great book! Which did not last long enough, as now I have wait for the next one to be released.

another excellent book by Marc and not in the direction I expected, Stephen brand gives another great performance. the fight in brothel is intense, the evil at worst is human, glad to see more gnome characters, and humour between stigers familia continues, the cliffhanger is also totally unexpected. the bad news, 2022.

The author’s writing and Brand’s narration are rudimentary at best. Edelheit repeats Stiger’s every thought and action ad nauseam. Additionally, he makes the fatal flaw of repeating the attributives “he said”, “she said” in every sentence, which is extremely distracting and annoying to audiobook listeners. What’s worse is Brand’s decision to annunciate the attributives with enthusiasm, which makes them far more distracting and annoying. His narration in general is also poorly executed. Brand’s monotone voice is actually quite pleasing; however, he doesn’t have the skills to differentiate between character voices, which would be acceptable if those characters weren’t gruff warriors, elves, orcs, dragons, old wizards, et cetera.
A disappointing story... 2.5 stars.

This has been a very enjoyable series and I hope there will be a book seven.

The book flew by jumping from one confrontation to another! This book along with the other five are a must for fans of fantasy and the Roman Empire. It went too quickly and as always left me pining for the next book!

Simply fantastic it was well written and I enjoyed the narration as well. So far this is my favorite series on audible for sure. If you like history and fantasy it’s a perfect merging of the two.

The performance carried me willingly through the story. Well worth the ride. You will enjoy the characters
The battles and the little things make the adventure!

The book felt really as one would imagine a palace takeover in the Roman empire would be. Somehow it reminded me of HBOs Rome and Caesar's struggle.

I have enjoyed the series so far and hope the 7th book would be a nice conclusion and wrap up. My only issue so far with the series may be the author's need to one up himself by increasing the challanges and pressure on Stinger with each book or chapter. It sort of feels like it dilutes the value and enjoyment by doing this. I understand why he does it, but really, I think the story would go well in a more balanced manner, without trying to hard to be more unpredictable each chapter than before. Anyway, looking forward to the next book!

Series has gone down the toilet

Stiger is now the top dog but the story twist off into a confusing jumble of Eric’s going nowhere. Elf addition is still a dumb distraction. Sadly a great series has gone off the cliff

This series was very well written. If movies and tv series did good writing justice I would recommend this series to be made into one. I would love to see accurate Roman formations on the big screen.

This book brings Stiger back home. His homecoming is less than he desired, but about what he feared.

He must more fully grasp the entire story that he has only had parts of and come to grips with his role in the fate of his empire and his world. He must develop his ability to lead and inspire his men and overcome the odds against them.

This book is fast paced. It does bring out some things that have happened in the past that are not fully explained, but I expect they will be built out in the future.