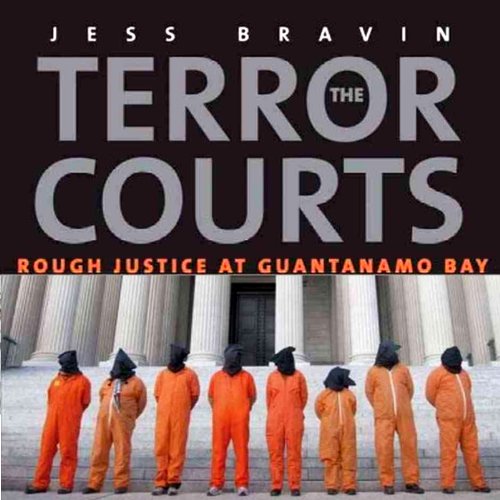 By: Jess Bravin
Narrated by: Robin Bloodworth
Try for £0.00

Soon after the September 11 attacks in 2001, the United States captured hundreds of suspected al-Qaeda terrorists in Afghanistan and around the world. By the following January the first of these prisoners arrived at the U.S. military's prison camp in Guantanamo Bay, Cuba, where they were subject to President George W. Bush's executive order authorizing their trial by military commissions. Jess Bravin, the Wall Street Journal's Supreme Court correspondent, was there within days of the prison's opening, and has continued ever since to cover the U.S. effort to create a parallel justice system for enemy aliens. A maze of legal, political, and moral issues has stood in the way of justice - issues often raised by military prosecutors who found themselves torn between duty to the chain of command and their commitment to fundamental American values.

While much has been written about Guantanamo and brutal detention practices following 9/11, Bravin is the first to go inside the Pentagon's prosecution team to expose the real-world legal consequences of those policies. Bravin describes cases undermined by inadmissible evidence obtained through torture, clashes between military lawyers and administration appointees, and political interference in criminal prosecutions that would be shocking within the traditional civilian and military justice systems. With the Obama administration planning to try the alleged 9/11 conspirators at Guantanamo - and vindicate the legal experiment the Bush administration could barely get off the ground - The Terror Courts could not be more timely.

What listeners say about The Terror Courts

Where does The Terror Courts rank among all the audiobooks you’ve listened to so far?

Brilliantly read, would have struggled to read it, but listening to it was easy. If you are curious about Guantanamo and what really happens, this is perfect gor uou.

What does Robin Bloodworth bring to the story that you wouldn’t experience if you had only read the book?

His intonation, dynamic and style are genius. I listen in 30 min chunks and was never irritated by his voice or accent

Hard yo do it in one sitting, you need time to digest the politics.

Meticulous and worth it

What to do with the suspected al Qaeda terrorists once they are captured? That's the thorny question and this book is well worth the listen. You won't find much analysis here. What the author does is lay out in step but step fashion how the Bush administration addressed this problem from a legal point of view, ultimately arriving at solutions which both skirted and manipulated the law to suit their own ideological viewpoint. The result: Guantanamo Bay, enhanced interrogations, end runs around the Geneva Convention, and constitutionally questionable military tribunals. If this sounds partisan it is somewhat tempered by the author's fine eye for inclusion of the arguments underlying the debates and decisions mixed with historical precedents. How do you prevent the next 9/11 while also trying to balance some semblance of due process and habeas corpus rights, all under the glare of a watchful public, political interests, and world opinion? You won't find solutions here; rather, each and very option seems so fraught with pitfalls that there is clearly no winning formula. This book is a fascinating look into the legal arguments and personalities that have brought us to where we are in the legal war on terrorists, all done with a deft hand for details and illustrated by the on the record case histories of the initial detainees, their stories, the prosecutors, defence counsels and trials. If I had one criticism is that the story almost exclusively deals with events prior to 2006 with only a much smaller portion devoted to events after but don't let this deter you.