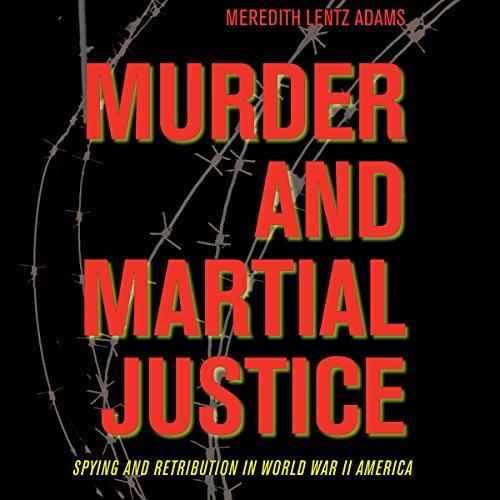 During World War II, the United States maintained two secret interrogation camps in violation of the Geneva Convention - one just south of Washington, D.C., and the other near San Francisco. German POWs who passed through these camps briefed their fellow prisoners, warning them of turncoats who were helping the enemy - the United States - pry secrets from them. One of these turncoats, Werner Drechsler, was betrayed and murdered by those he spied on.

U.S. military authorities reacted harshly to Drechsler's death, even though he was not the first captive to be assassinated by his fellow POWs. How had military intelligence been compromised? Were fanatical Nazis terrorizing their countrymen on American soil? Would Hitler take reprisals against the GIs he held if the United States did not protect the German POWs from violence and death while confined at the interrogation camps? At one of the secret camps, U.S. officials forced Drechsler's seven murderers to confess. The next problem faced by authorities was how to court-martial them when their confessions were legally invalid. Their secret trial was stage-managed to deliver death sentences while apparently complying with U.S. and international law.

This presented U.S. authorities with further problems. The Geneva Convention entitled the prisoners' governments to the full facts about their crimes, trials, and sentencing. Despite escalating German complaints, the War Department adopted a policy of giving as little information as possible about any of the several POW murder trials in order to avoid releasing inconvenient facts about the Drechsler case. Unsurprisingly, the Reich began sentencing GIs to death. Gambling with American lives, the War Department stalled every German attempt to trade these men for the convicted German murderers until the war ended. Every American was saved; every German but one was hanged.

The book is published by The Kent State University Press.

"An expert dissection of the crime, its witnesses, and Washington's shifting goals. Murder and Martial Justice is a good murder mystery, based on a solid examination of the various contradictions and irritating bureaucratic villains." (Arnold Krammer, author of Nazi Prisoners of War in America and Undue Process: The Untold Story of America's German Alien)

What listeners say about Murder and Martial Justice