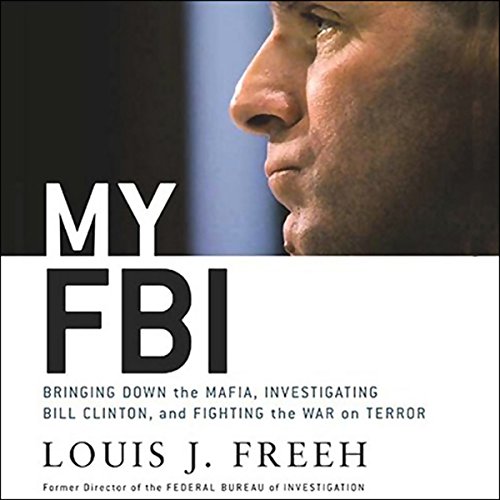 Louis Freeh led the Federal Bureau of Investigation from 1993 to 2001, through some of the most tumultuous times in its long history. This is the story of a life in law enforcement and of one man's determined struggle to strengthen and reform the FBI while ensuring its freedom from political interference.

Bill Clinton called Freeh a "law enforcement legend" when he nominated him as FBI Director. The good feelings would not last. Going toe-to-toe with his boss during the scandal-plagued '90s, Freeh fought hard to defend his agency from political interference and to protect America from the growing threat of international terrorism. When Clinton later called that appointment the worst one he had made as president, Freeh considered it "a badge of honor".

This is Freeh's entire story, from his Catholic upbringing in New Jersey to law school, the FBI training academy, his career as a U.S. District attorney and as a federal judge, and finally his eight years as the nation's top cop. This is the definitive account of American law enforcement in the run-up to September 11. Freeh is clear-eyed, frank, the ultimate realist, and he offers resolute vision for the struggles ahead.

What listeners say about My FBI

Just finished the book this weekend and liked it. His clarity of thought makes me think he's the kind of guy who keeps copious notes in whatever he does. Strikes me as an utterly no-nonsense, honest judge and prosecutor. Disparaged as a "Boy Scout," his high esteem for the rule of law oozes from his words. At times, the listen drags because of Freeh's detail. The Mafia, OK City bombing, Unabomber, Khobar Towers, USS Cole, Sept 11, Clinton investigations, FBI spies, etc. -- it's all here. I read that Joe Lockhart, former Clinton Press Secretary, characterizes the book as "following the right-wing playbook," but Freeh's remarks about Clinton are frank and fair and take an appropriate fraction of the book. Best I can tell, Louis Freeh's political leanings are liberal Republican or even moderate Democrat. He writes favorably of Nelson Rockefeller, Warren Rudman, and Rudy Guliani and has several liberal friends, including Bill Clinton's first White House counsel, Bernie Nussbaum (who recommended Freeh to Clinton), and Bob Bennett, Clinton's lawyer in the Paula Jones case.

There are a few interesting moments in this book. After all it's partly about the FBI. But mainly, I was very disappointed. Partly because he spends the majority of the book droning on about himself. But my main problem with the book is that it becomes clear early in the book that he is an axe-grinder of the first order. He goes on at length about his issues with Bill Clinton and Richard Clarke's books, to the point where he actually cites page numbers! He then follows this up with personal attacks on these men. Frankly, I was excited to listen to this book, but now I feel like I should have saved my money - rather than a story about the FBI, it's a tool for Louis Freeh to spew his venom. Ugly!

Great read. Would have liked more facts and history. Really enjoyed reading it. Worth recommending to anyone who enjoys history.

By way of background, I love FBI/CIA memoirs. They almost always share two downsides: 1) incredible narcissism, and 2) a lot of whining about bureaucracy. While both of these things are terribly unpleasant, they are usually outweighed by the upsides--a lot of great crime-fighting and spy stories. However, the downsides to My FBI are greater than even in a regular FBI book and the upsides are more limited.

I found the author unbearable. This is sad, because I ddint know that much about him and began the book perfectly inclined to like him. But, wow. He is the kind of guy who goes on and on and on about how impressive his humility is. His praise for himself lacks any hint of nuance and, everytime he mentions someone who agreed with him about something, he describes that person as a true genius. It's really over the top. The truth is that he might have done a lot of great and important stuff. But, his overwhelming narcissism utterly destroys his credibility in assessing it.

While only a small point in the book, the place where I finally lost it was about halfway through where he describes a failure of the FBI to turn over some documents which resulted in a delay of Timothy McVeigh's execution. I kid you not, he talks about how amazing it was that he took full-resposibility for the oversight. Within sentences though, he goes on to blame under-funding by Congress that led to inadequate technology and rogue local agents. If you want to blame them fine, but the whole point of taking full responsibility is that you don't get to turn around and blame other people. Frustrating. There's also a ton of whining about bureaucracy but no need to rehash that here.

In any event, these downsides (much greater than in a standard FBI book) are not counter-balanced by the upsides you usually find. He was an agent for a few years a long time ago and has a modicum of mildly interesting stories about that. Otherwise, he was an executive and didnt have the kind of hands-on involvement in the kind of real law enforcement work that gives rise to good stories.

Finally an honest report about Clinton's Reign of Terror. Freeh goes the extra mile to show how Clinton used and abused his power and the system to further his personal ambitions at the expense of America. Every voter should read just how the Clinton's manipulated racial and economic groups to remain in power. Freeh also reveals how Clinton engaged in the worst crimes against Americans from the slaugher in Wacho to the appointment of leftist extremists to the Supreme Court. The work also shows how both Clintons presented a false and dishonest face to the general public while mired in domestic strife over Bill's sexual misconduct. Hopefully this book will go a long way to help avoid the same mistake again in 2008. Hurrah for Mr. Freeh - a man of integrity and guts who fought for each and every American.

Interesting, but very self serving

I found this book to be interesting, but also found Mr. Freeh to be slightly egotistical. During the foreward, where he tells us the book is about the brave and dedicated men and women of the FBI doesn't ring true as you listen to the book.

Each story becomes a morality tale where he is the hero. And his allegations and suspicions are not supported with facts, but with his own take on the tale. Hindsight being 20/20, it's easy for Mr. Freeh to speak to how he would have handled Waco, but at that time, in the heat of the moment how could anyone be sure of what they would do?

I was eager to hear this book, and now once finished, I'm reminded there are three sides to every story; Side A, Side B and the truth.

Thank you for your service

Mr. Freeh has written an insightful and introspective book not only of his service, but those dedicated Americans who receive minimal if any recognition for their service to the preservation of our democracy. His insights are an honest and sometimes frightening light on the ineptness of those we elect to lead at all levels of our government.

Finally, an honest book about the Clinton Presidency. History will decide a final verdict about Bill and Hillary, I hope I am still here.

this is a well written easy and interesting book. I really liked it but it was abrighed. The stories they do not have in this audiobook are very interesting so bad they abrighed it.

For those who serve-Semper Fi

There were not to many surprises in this book for those of us who chose to stay informed during the 90's. What kind of national security were we expecting from a President whoose campaign slogan was "It's the economy Stupid". At least Clinton knew to call us stupid!!!