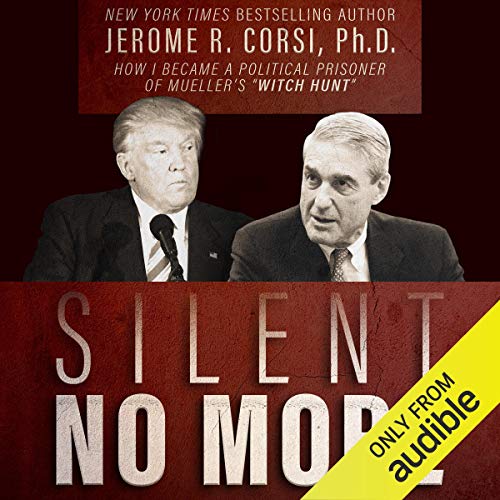 Silent No More: How I Became a Political Prisoner of Mueller's "Witch Hunt"

As seen on Tucker Carlson Tonight, Hannity, and CNN!

In Silent No More: How I Became a Political Prisoner of Mueller’s "Witch Hunt", New York Times best-selling author of Killing the Deep State Jerome R. Corsi, PhD meticulously details the psychological torment he was subjected to in what the media has simply called "The Mueller Investigation".

In late 2018, in an FBI closed conference room with no windows, Dr. Corsi was confronted for hours upon hours at a time by detailed questioning about events that occurred in 2016. Dr. Corsi’s inquisition was worthy of the Gestapo or KGB, designed to break even the most cooperating witness. Over a period of two months, three of Mueller’s top prosecutors and an army of FBI agents - up to nine government officials at a time - questioned Dr. Corsi with his attorney, David Gray.

Throughout this harrowing ordeal, Dr. Corsi handed over his personal computers, his cell phone, all of his email accounts, his Twitter account, and his Google account. Finding no "smoking gun", Mueller’s prosecutors blew up the meetings. Dr. Corsi refused to lie to the prosecutors to give them the ammunition they needed to prosecute Roger Stone, and as a result he was told he would be charged with a criminal offense for lying to the FBI and the Special Prosecutor. At 72 years of age, Dr. Corsi was subjected to extreme mental anguish, imagining that he may never see his family again as a free man.

Rather than conducting an honest investigation, Mueller’s special prosecutors reinforced a prefabricated narrative aiming to charge President Trump with treason. Silent No More: How I Became a Political Prisoner of Mueller’s "Witch Hunt" exposes the inner workings of this governmental escapade, and clearly states why Mueller has no case against the president.

Dr. Corsi creates a compelling case indicating that the entire matter is an investigation in search of a crime - to force lying testimony from witnesses if that’s what it takes to achieve Deep State political objectives.

What listeners say about Silent No More: How I Became a Political Prisoner of Mueller's "Witch Hunt"

details on why we HAVE TO TREAT GOVCO as suspect

not all readers will have the patience for the slow detailed roll of this book, but all readers need to take in the details of how vulnerable we all are to the crushing accusation machine of the powerful. just don't cooperate with them at all.

I wish every American would read Jerome’s book and people will wake up to the truth of where our nation is at. It’s not too late...

Hope you are never under government scrutiny.

Whether you believe Corsi or not, this book describes why and how the Mueller investigation works to break witnesses and targets. Are we sure that we are not living in Russia?

All Americans should be concerned

All Americans should be concerned about the abuse of prosecutorial abuse in the U.S. Government should be the ones burdened with providing proof, instead not having evidence and then browbeat their targets with threats using perjury traps. When targets are identified by ideology, beware that it is only a matter of time before all of our freedoms are taken away by the state.

a must read on what's really going on behind closed doors with the Mueller cartel and the Deep State. No one is safe.

I wasn't thrilled with the narration. But a few chapters in it was better be did read. What a witch hunt. Thank God for free speech. They tried to silence him. But he prevailed....

a man of great courage

Mueller had hoped to use Jerome Corsi in a trail that would ultimately lead to President Trump, a trail validating Mueller's two-year Witch Hunt to prove collusion with Russia by President Trump. Amazingly Mr Corsi faces possible imprisonment while the Clinton's and their ilk are protected by the Deep state. Lots more to the story so I recommend either reading his book or listening to his audio.

Jerome Corsi is a national hero.

In vivid detail we get to hear what it is like to be called before a corrupt federal prosecutor who has virtually unlimited resources to jail an innocent man who refuses to lie and do a plea deal confessing to a crime he did not commit in order to avoid dying in federal prison. And don’t think for a minute that it is just Mueller. Political prosecutions happen all the time. Let us all stand with Dr. Corsi for where we go one we go all (WWG1WGA)

Loved learning what went on the ONLY critique was the narration. I like the author read the book but the pauses made it difficult at times. CONTENT: EXCELLENT