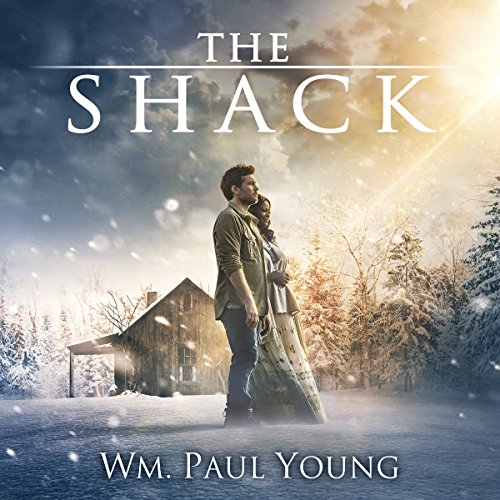 The powerful best-selling novel, now a major motion picture, of how a grief-stricken man's encounter with God changes his life forever. With 20 million copies sold worldwide, The Shack is an international best seller that explores life's toughest questions through the gripping story of one man's struggle to find answers to his suffering.

Mack's youngest daughter, Missy, was abducted during a family vacation, and evidence that she may have been brutally murdered is found in an abandoned shack deep in the Oregon wilderness. Four years later, still trapped in his great sadness, Mack receives a suspicious note, apparently from God, inviting him back to that shack. Against his better judgment, Mack arrives at the shack on a wintry afternoon. What he finds there will change his life forever.

The Shack wrestles with the timeless question 'where is God in a world so filled with unspeakable pain?' Mack's experiences when he faces up to his darkest nightmares will astound you and perhaps transform you as much as they did him. This is the kind of story you'll want to tell everyone about. Millions have discovered it already - now it's your turn.

This audiobook contains a bonus interview with the author.

What listeners say about The Shack

my second visit of reading The Shack,

This book blows me away and us an amazing read which I have shared with many family and friends. Can't wait for the film

Loved this down to earth but also full of intrigue


wonderful right up to the end twist! Really enjoyed this and the narration was wonderful

I stumbled across this book while trying to find myself and it has really helped me to open my heart and understand the world, forgiveness and love.

The narration to WM Paul You g’s book The Shack brings the story to life. But this book is so much more than just a story. It will touch each reader in ways unimaginable. It tackles issues of theology and ‘church’ that trip up so many and brings to the fire the deep love and grace of God, beyond any boundaries of religion, creed or doctrine. A truly amazing book.

I loved it! This book helped me to understand my "great sadness". It is the third time that I read, and all the times is deeply touch.

Indescribable in a few words... All I can tell is that after watching the movie I couldn't wait to read the book! Fundamental questions about God (his love and justice) perfectly explained!

Loved listened to this book, it was read really well.
Although I'm not religious in any way or form, I do believe God (our creator) is with in us, if we embrace ourselves we embrace God - our creator!

More meaningful each time I listen/read it.

Each time I read or listen to this book it becomes more meaningful to me. I could not cuddle my farther when I was young, I pulled away because his breath stank of smoking and I was too young to tell him. It was not till I was older that my Mum told me that he always wondered why? Relationships can be made or destroyed before you realise it has happened. Now I can forgive my dad.

I thoroughly enjoyed this book. It wasn’t perfect but was very well told and racially inclusive!

I guess you have to be a devote Christian

Don’t get me wrong I don’t mind religious books or novels, i just came for this book as a thriller or a mystery. The beginning was a solid mystery book , but then it went to preaching but to the wrong audience. I guess i might have liked it if i were a Christian but im not so for me it just someone taking his believes way to seriously for me.

Anyway there was one part i kindda liked or not expected to be honest which was (spoilers: when God asks mack to forgive his daughter killer, that took me by surprised , i felt an immediate response to that, it was disgusting at first and then sweet)

My starting point to heal

Loved it! couldn't wait to listen wat happens next. It showed me how to heal from the bad that happend and that God is not judgemental.

Simply life changeing experience. loved it. not too religious just a simple yet complex way to understand god

I can not recall when last I found it necessary to discuss a book in depth. Well, it certainly reawakened my urge to let it out.

The Shack is without a doubt God-breathed.

The Shack cuts your soul and leaves it wide open for God to come in and heal you.

I listened to the audio book in 2 days! Couldn't stop listening; and read it again in the following weeks!

Not for the critical thinker.

I found many of the situations in the book contrived. Not my cup of tea.

Loved the story. Finished it very quickly. I struggle with forgiveness towards myself and others. This book made me think about that. It touched all the strings in my heart when I felt hurt by others, which resulted in me closing my heart. Despite the story being fictional, everything else here is real. At least, for me.

By far the most touching book I've ever read and listened too. You start seeing life in a different light.

Thought-provoking illustration of our relationship with God, others humans and dealing with hardship especially grief.

If you are doubting... you won’t regret it

I loved everything about this book. Paints a picture about God and life that is so painfully necessary. I would recommend this book to anyone that was able to understand language. This is by far the best book I have ever purchased and this comes from someone that has had an obsession with books since age 7. Really... unbelievable.