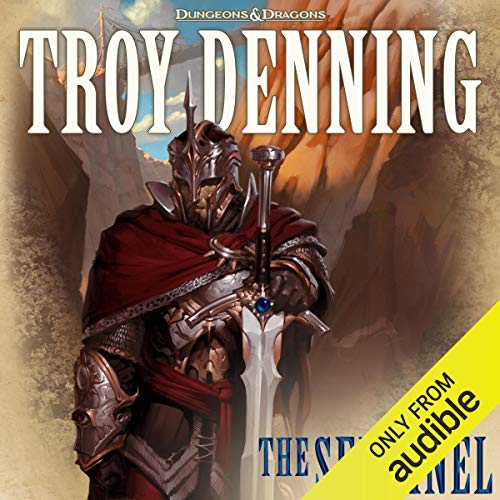 By: Troy Denning
Narrated by: Marc Vietor
Try for £0.00

In the fifth book of the multi-author Sundering series, New York Times best-selling author Troy Denning sends an embittered paladin, Kleef Kenric, on a quest to stop evil forces from taking advantage of the chaos rolling across the land of Faern and claiming dominion over the entirety of the Realms.

Stubbornly clinging to his family’s worship of a long-forgotten god, Kleef Kenric soon discovers that his god has blessed him with divine gifts, making him one of a new group of Chosen cropping up around the Realms. This divine gift makes him an excellent ally—and a target for those who wish corral his powers.

After battling his way out Marsember, a city besieged on all sides in the wake of the Sundering, he becomes swept up in the mission of a group of odd allies—a warrior noblewoman, an accomplished thief, and a mysterious short pudgy man exuding a faint odor of decay. With the forces of Shade tracking their every step, they travel to the Underdark to thwart the rise of the goddess of Death, but before long Kleef learns that his allies hide dangerous secrets—secrets that could destroy not only Kleef but the very fabric of the Forgotten Realms.

What listeners say about The Sentinel

Good story that doesn't go where I expected

It is a great cross section of my favorite setting and furthers the story of the Sundering in very meaningful ways.

There were some opportunities for better character development, but all in all a decent story. Probably even better on my second listen.

Totally engrossed and unable to stop listening. Absolutely loved it! Found myself disappointed upon reaching the end!

This was another good book in the Sundering series. Good story, and characters. I've been a big fan of Mark Vietor narrations for awhile now, and that really made this book great for me.

My favorite book of the sounding.

I would love to hear more about the adventures of Kleef. it would be great to see him and the girl get together.

another good one in The Sundering series

interesting characters.. good action.. good narration. I enjoyed it. Four stars for story because I didn't get ENTIRELY sucked in. Still good, though.

This book is truly held up by the strength of its nuanced characters and character-dynamics.
We are in the book also given an interesting insight into the concept of Evil Heroes, as well as different aspects of what it means to be good.
A great story, a highlight of the Sundering.

Best book of the series.

I have found me wanting to listen to more about these characters. The narration was clear and with enthusiasm for the story.

A good story, but it was rushed or to slow

This story had a great beginning, but it slowed down as too much was rushed forward too fast. If this book was to be the first in a series it was a failure. If it was meant to part of this whole series like it's predecessor it fell flat. I did enjoy the story as it was good if you like a rushed story that showed have slowed down.

I thought the story was good and added to the sundering series really well. I wish it was longer thpugh.

When you pick up and book about a Paladin of Helm, you expect it to be about Helm and his Paladin. The story of a watchmen struggling to maintain is honor and the code of a dead god should by all rights be every interesting, and when the story actually does, it is.

However,Topsword Kleif Kennric is effectively a side character in his own story, with the narrative preferring to focus upon a generic “strong” noblewoman and boring seductruss cleric who wind up in a relationship with each other with next to no build up.

This was a story that had all the pieces to make a great tale and chose to use none of them.