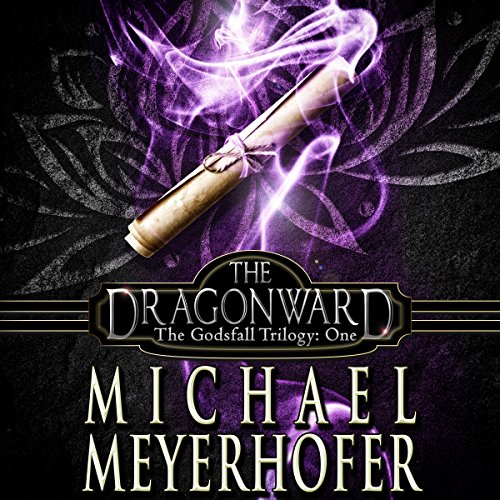 By: Michael Meyerhofer
Narrated by: Craig Beck
Try for £0.00

Three years after the War of the Lotus, alliances have already begun to unravel. As Rowen Locke struggles to maintain peace, troubling news reaches him from every corner. Persecution of the Shel'ai has reignited in the south, spurred on by a fanatical priest. To the north, the Isle Knights are withering under the leadership of mad Crovis Ammerhel. Old friends fight each other when not drowning their sorrows in taverns.

A new threat emerges from across the sea, dispatched by the same exiled Dragonkin who have been plotting their revenge for centuries. Rowen and his companions soon realize that the target is the Dragonward itself: their one and only defense against an evil so vast even Knightswrath could not vanquish it.

What listeners say about The Dragonward

A New Branch to the Rowne Locke Story

Rowen Locke has struggled to keep the peace between all races since the end of the War of the Lotus 3 years earlier. But people are quick to forget how magic, the Shel’ai, and others brought peace, it is easier to remember the old hatreds. Then there is a new Shel’ai called Algol that has plans to bring down this world. Algol has partnered with Crovis Ammerhel and is planning on bringing down the Dragonward and return the dragonkin to this world. But Rowen Locke, Maddoc, Igrid, and others are going to do whatever they can to keep that from happening.

Rowen is doing his best to protect those that he loves, even though everyone else seems to be against him. But he is loyal and determined, even if he is arrested, falsely imprisoned, beaten, and threatened to be executed. I loved Igrid, she is strong and determined and won’t quit no matter what. You can tell that she loves Rowen deeply although I think she was going to kill him. Algol is a powerful She’ai and has his own history but he is willing to do whatever it takes to bring back Nekiel.

If you like epic fantasy stories you have a read this one. This is an amazing story with lots of action, death, and a serious bad guy that has plans to destroy everything. What more could you want? If you like audiobooks, make sure to check out the Audible copy. The narration was amazing and helped draw me into the story.


This a Fantasy Tale of a land where the people find it difficult to survive and where war may erupt at any moment.

The Dragonkin, have been exiled and are threatening revenge.

The story line was filled with twists, suspense and magic.

I was held captivated by the entire book.


Craig Beck did really well with the narration.

Great listen from a good author. The narration is perfect throughout, Beck does a fantastic job with this novel, just like he did with the Dragonkin series. Looking forward to the next book.

TARGET AUDIENCE: This is an epic fantasy, appropriate for teens and adults of all ages.

PROFANITY, VIOLENCE AND SEX: Some violence, no profanity, and no sex. Very tasteful.

STORY: This is an additional series following the Dragonkin Trilogy. Although not required, it makes more sense if you have read the Dragonkin trilogy first. The main character Rowen is pulled back into a war between the races despite his effort to bring peace. He is dedicated to serving the people he loves and protects regardless of consequence.

NARRATOR: Craig Beck is an amazing narrator, and truly brings the story to life.

OVERALL: This is a must read.

“This audiobook was given by the author, narrator, or publisher at no cost in exchange for an unbiased review via Audiobook Boom.”
As usual Michael Meyerhofer has woven a tail that spellbinds you as Craig Beck brings it to life.
I enjoy this pairing of writer and narrator. The work is detailed with multiple characters in their own world that is both magical and also full of emotion .

I received this book free from ebalst, and this is my unbiased opion. good story worth a listen. Enjoyable characters.

I really enjoyed The Dragonward. It was entertaining and fun to listen to. I would have liked some more depth in terms of the performance; however, the story kept me interested so that I didn't focus too much on the production. The character building was phenomenal. I'm excited to read the next installment!

*Original Review*
I listened to Dragonward without having any knowledge of the Dragonkin books. This is a separate trilogy, but because it’s a sequel trilogy there really wasn’t much character backstory here. I found it difficult to get attached to some of the characters because I just didn’t know much about them, but the author did a great job with the antagonists here. There were segments that explained some of the back story from previous events, so I never felt lost in the story. The story in this book is excellent and it moves along quickly. I enjoyed the fight scenes, and I really liked how magic worked in this novel. The narrator did a fantastic job with the voices, but his pacing really threw me off at times. It wasn’t really noticeable during the action scenes, but he would pause repeatedly in the middle of sentences, really, breaking my, sense of immersion. Overall I really enjoyed this book, but I think it would be more enjoyable if I listened to the Dragonkin books prior. I would definitely listen to the rest of the Godsfall trilogy.

Knights fighting Knights for all the wrong reasons

Would you consider the audio edition of The Dragonward to be better than the print version?

I only listened to the Audio version. I enjoyed the story but was a little disappointed in a few sections. A lot of action and fighting in the book.

Which character – as performed by Craig Beck – was your favorite?

Rowen is an excellent character. An honorable Knight but not the most talented Knight. Seems to always survive. Also liked the Iron Sister Character. Would have liked to hear more of the Romance between Rowen and her.

It was sad that Sanway was just killed off. It was great to see Krovis and all his plans go down the drain.

Really enjoyed the listen. I received this Audio book for Free from Audio Book Boom in exchange for an unbiased review.
Thanks!

I received this title for free in exchange for an unbiased review.
-
The book moves along at quit a clip. Well keeping the listener interested in the rapidly advancing story-line; I couldn't help but feel that there was ample room for additional character development. Overall the book was good at 10hrs, but could have been amazing in the 16-18hr range given more character interaction and backstories. I would be happy to pick up the rest of the trilogy as it comes out.