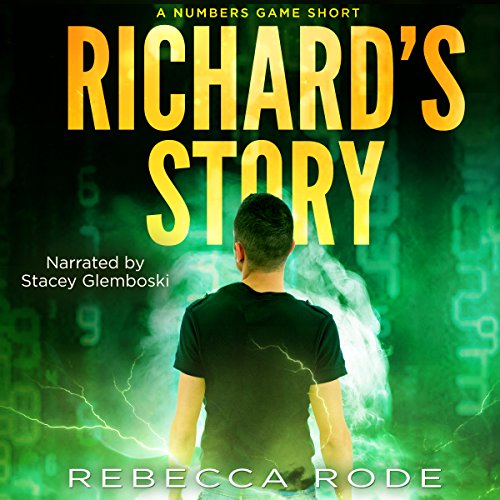 Richard just wanted a girlfriend - not the apocalypse. Richard Peak's senior year is looking painfully ordinary - fighting for position on the soccer team, his parents' constant arguing, a glaring lack of a girlfriend. He can't wait to graduate and join a soccer team overseas, preferably as far from home as possible. Then the president is assassinated and his life changes forever. As an alarming chain of nationwide terrorist attacks trigger a civil war, Richard finds himself on a dangerous journey for survival. As those around him fall prey to hunger, illness, and hatred, Richard must decide between a full stomach and humanity - and somehow create a new society out of the ashes of a fallen world. Richard's Story is the secret journal of the boy eventually founded the New Order Republic of America (NORA). This is an exclusive prequel to the best-selling Numbers Game Saga.

I really enjoyed this book! I’ve never read the Numbers Game series, so this was my introduction to the series, and it really makes me want to read the main series because it was a well written, really believable and all the characters fell like real people.

The narrator, Stacey Glemboski, was brilliant. I don’t normally like narrator that are a different gender to the main character, but she was so good that I forgot about it. She voiced Richard and Beyu brilliantly, and it was so easy to tell which characters were speaking.

Interesting, but a bit disturbing

Of all the books in the series I liked this one the least. While the content was excellent a lot of it was already covered word for word in the third book. There is new material and it is interesting to get Richard Peak's story in this own words but I was a little disappointed that so much of it was a repeat.

Is it worth listening to? Yes, this book effectively gives the story of the birth of NORA and the numbers system.

The narration is once again excellent. The POV for this story is Richards' but Stacey did such a great job I forgot I was listening to a female narrator!

I received this book free from the narrator/publisher/author in exchange for an honest review.

I am a great fan of Ms. Rode’s series. I was fortunate enough to receive the Numbers Game Saga first. After reading the entire series I went back and read the shorter novels regarding the secondary characters. I noticed that this book is currently listed as Book 0.5, but I would greatly recommend that this be read last rather than first.

This book provided so much additional background for the series and takes place as the apocalyptic event is happening and immediately thereafter. It provides the reader with a “how did we get here” response that is not necessary to read the main series but is very satisfying as an ending to the novels.

I was provided with a free copy of this audio book for my honest review. The views expressed here are entirely my own.

If you enjoyed the Numbers Game trilogy by Rebecca Rode, Richard's Story is a must read to understand the background and origin story of how the once prosperous United States becomes a desolate place to live with few survivors. The similarities between Treena and Richard are numerous, the least of which is how they unwittingly become extraordinary heroes.

Richard’s Story follows the life of Teena’s grandfather, Richard Peak, who is just a normal senior in high school. Then, almost overnight, the world changes drastically after numerous terrorist attacks trigger a civil war. After going to live in the mountains in pure survivalist mode, Richard watches as his parents are killed or fall victim to disease like many others around him. Richard takes matters in his own hands and creates a new society – the New Order Republic of America (NORA) -- where everyone must do their part if they want to survive.

Stacey Glemboski did an outstanding job narrating the audio version of this story. She provided distinct and consistent voices for all characters throughout and had great intonation and pace, conveying urgency in all the right places.

Would you consider the audio edition of Richard's Story to be better than the print version?

Yes, the audio narration added so much to the story!

What was one of the most memorable moments of Richard's Story?

Don't want to give away spoilers, but when the clan checks out Richard's lead on peaches.

Richard's Story: A Numbers Game Short (Audible Audio) by Rebecca Rode and narrated by Stacey Glemboski is an audible book I requested and the review is voluntary. I absolutely loved this story. It had my emotions all over the place. Is this a scenario that could happen, maybe slightly differently? Could our own government do this to us instead? Would we did this to ourselves after? A terrifying story, a touching story, a story of holding on to humanity when humanity is a thing of the past. It is a short story but it packed a punch! The narration was so perfect, it was chilling. Loved this short but powerful story.

WELL WRITTEN STORY. VERY DESCRIPTIVE FROM A SURVIVING WORLD WAR 3 POINT OF VIEW. ON A PERSONAL NOTE GOOD FOR LATE TEENS TO YOUNG ADULTS. NARRATOR WAS GOOD EASY TO FOLLOW.

Great Beginning of the End

I loved getting to hear Richard's story fully. Even with all the tragedy and the end of the world as we know it it was still a good read. Getting the full picture instead of just the glimpses from Numbers raging this explained so much about how it all happened. Stacey did an amazing job narrating and showed how awesome she really is at filling her voice with emotion.

“I was voluntarily provided this free review copy audiobook by the author, narrator, or publisher.”
This book started out really slow for me, I've stuck it out though I would like to read/listen to the next one...I thought the narrator was awesome and I look forward to listening to more to see if its a genre I would like to pursue more.

This was very fast moving.A high school boy just wants to get through his tests.Right before he learns that the president has ben assinated.After that nothing will ever be the same.Great witing!Narration by Stacey Glemboski was really good.“I was voluntarily provided this free review copy audiobook by the author, narrator, or publisher.

Very entertaining and enjoyable. Great addition to the series. This was an interesting insight to how the number system started. Even if you have already read the rest of the series this prequel fills in the backstory of how and why the country is the way it is.

Told by Treena's grandfather Richard. The story details the events that preceded the collapse of society. The changes it had on not only Richard's life but the whole country. Leading him to implement the number system.

Stacey Glemboski did a fantastic job with the narration as usual. She has one of those voices that just pulls you into the story and makes it and the characters come to life. Great character voices. Both male and female. Clearly spoken with a nice even pace. She was the perfect narrator for this series. Very enjoyable

Richard's Story by Rebecca Rode was another great companion story. Richard didn't expect the world to turn into the apocalypse. His whole life changes after the present assassinated and his family goes for safety at his families. It quickly becomes a journey of survival. I love the Numbers Game series and can't wait to read more about Rebecca Rode.