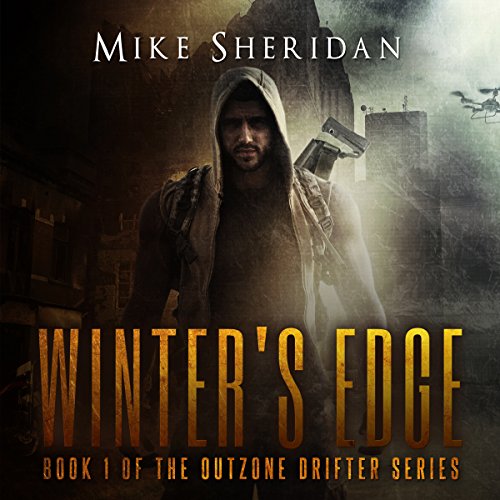 By: Mike Sheridan
Narrated by: Kevin Pierce
Try for £0.00

Seven years after a global war has devastated mankind, Frank Brogan and his family live in the safety of New Haven, a newly-formed authoritarian state deep in the American northwest. Beyond the Exclusion Wall lies the Outzone, a lawless territory ceded from federal jurisdiction. Brogan never thought he would go there. He was wrong.

When three Outzone bandits cross into New Haven and murder his wife and daughter, Brogan quits his specially-trained police unit to hunt them down. Entering the Outzone, he travels to its de facto capital, Winter's Edge, and picks up the bandit's trail. In a violent city controlled by rival gangs, he needs to use all his hard-won skills as a police officer and war veteran to survive.

It isn't long before Brogan's quest takes him out of the city and deeper into the territory, where a beautiful but dangerous woman takes a keen interest in him. Can he survive encounters with the nomadic tribes that roam the Outzone's mountains and plains to finally confront the men who murdered his family?

What listeners say about Winter's Edge

Would you listen to Winter's Edge again? Why?

Definitely. The story is carefully drawn together around a really interesting set of characters. It makes it the type of book that you can go back to really easily.

Frank Brogan was a great lead character. Really well written. The horror that sets him on his path for vengeance doesn't lead to a character that's twisted or unlikable which can sometimes happen, rather he has a personal mission and a hero's journey.

Which character – as performed by Kevin Pierce – was your favourite?

Kevin Pierce has a great voice for a strong male character. The leader/hero type of voice. Whilst its great narration in general it does bring our lead character to life.

My strongest reaction was to look forward to the next instalment. Brogan is a brilliant character that we want to see more of!

How soon can I expect book 2?

this is a great dystopian based novel without zombies or plague and a ton of excitement. Riveting story line that you do not want to stop listening, even if it is 4am

I would buy more software if they guaranteed that Kevin Pierce was reading the software purchase agreement. He could make a listing of toilet manufacturing companies sound interesting.

You will have no regrets if you buy this book.

Once again Kevin Pierce does a nice job of narrating the book. This book is about the trials and tribulations of someone who leaves a place of safety in order to help him mend his past. It is very well read, has a solid plot, and does not go beyond believability. I recommend this book if you love SHTF and adventure stories.

Let me be honest - I am one of those readers that expects an author to grab me by the seat of my pants from the get. This one didn't initially. At the end of the 1st chapter I thought to myself, "Hmm, gonna have to listen to this whole book, since I got it in exchange for a honest review, sigh". Good thing I was wrong. Didn't take long at all before I was into the story and listened to it non-stop. Furthermore, I was upset when I was done with the book and immediately went to Audible so that I could purchase Book 2. Book 2 isn't out yet. Mr. Sheridan - if you see this, could you speed it up please?

In summary - This book is worth buying, worth reading/listening to and I enjoyed it immensely and I highly recommend.

Would you be willing to try another book from Mike Sheridan? Why or why not?

Yes. This book was good enough to continue with the series

I could have done without the farming stuff. It sort of broke up the flow. The beat down scene with Brogan was intense. Kevin as always did an excellent job narrating.

Would you listen to Winter's Edge again? Why?

Most definitely. I have listened to many post apocalypse novels and have really enjoyed the ingenuity and creativity of most of the writers. However this one has a story line that really sticks out. Its character development isn't any better than others I've listened too but the story line has you hanging on and wanting more. I really think this one could easily be an HBO series.

I think what I liked best and is so frustrating, is that I really can't wait for the next one to come out. I have felt that way about others but this saga of novelty and excitement creates an appetite that is hard to just set on the shelf till the author decides to come out with the next volume.

Kevin Pierce is the standard. He never lets you down

I Thoroughly Enjoyed This Audiobook

Absolutely. This is a well written story, with a great narrator. A winning combination.

What was one of the most memorable moments of Winter's Edge?

Even the least memorable moments somehow work their way back into the story, becoming a key piece of the puzzle.

The book ends rather abruptly. Kind of a, "Wait? What? Our Eight Hours are up already?" and leaves you with questions. Questions like "But... But... What happened to the little Mexican Kid at the Bus Station? What about the pretty blond girl? And... Did our hero catch a nasty disease from that hooker in the hotel room that he doesn't know about yet?

I guess I'll have to listen to Book Two to find out...

Frank Brogan wants revenge, don't get in his way!!

After a global war devastates the world, Frank Brogan lives within the safety of New Haven. When his family is killed on a trip in the out zone, Brogan goes after revenge. Leaving the safety of New Haven he ventures outside to the lawless zone to track the three killers down. This is a good story and the start of what promises to be a good series.

This was a rare gem; I was offered this title free in exchange for a review and I'll admit it was the cover that caught my attention. The story being great and the narration being pretty great was an added bonus.

I love dystopian fiction and I love thriller, action, adventure (for more audiobooks like this, you can see my reviews on my website, thelifeandlies.com) It didn't take long for me to get into this story, and it kept me intrigued the whole time.

It started out a little slow, however from there on it rocked. And of course Kevin Pierce makes it incredible.

Another great performance by Kevin Pierce! He is definitely my favorite narrator for this type of book.
I thoroughly enjoyed this book. I'm looking forward to seeing where the relationship with Rojas ends up. I also can't wait to find out about Ritter!
I loved how the tribes were of mixed race. I know that the treatment of women & the down trodden is always going to play a part in books like this. I'm glad this one includes revenge too.
I would recommend this to older teens & anyone who like dystopian SHTF type books. If you pay close enough attention you may actually learn a thing or two in this book.

This audiobook was provided by the author, narrator, or publisher at no cost in exchange for an unbiased review courtesy of Audiobook Boom.