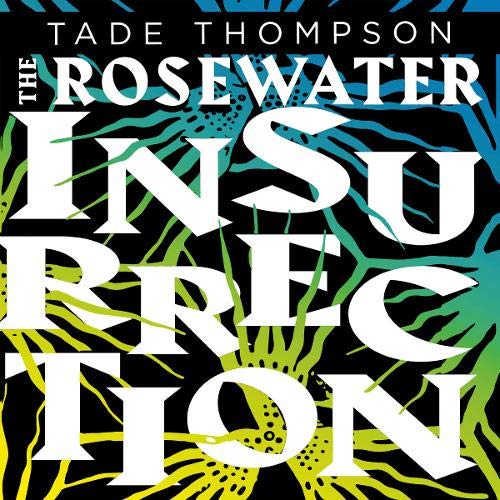 By: Tade Thompson
Narrated by: Bayo Gbadamosi
Try for £0.00

The year is 2067. The city of Rosewater is chaotic, vibrant and full of life - some of it extraterrestrial.

The charismatic mayor, Jack Jacques, has declared Rosewater a free state, independent to Nigeria. But the city's alien dome is dying. Government forces await its demise, ready to destroy Rosewater's independence before it has even begun.

And in the city's quiet suburbs, a woman wakes with no memory of who she is - with memories belonging to something much older and much more alien.

What listeners say about The Rosewater Insurrection

In this second part of the Wormwood series a new character is introduced, a woman who wakes up with no memories of her life. Readers soon find out that she is a part of the aliens' long plan to invade earth. Familiar characters have to fight to protect themselves, her and their loved ones among power struggles and actual warfare. Indeed the government is at war with the city of Rosewater, as the dome's regenerative powers are fading and an alien plant seems to be taking over people. Finally, the person in charge decides to find a compromise with the aliens to save the city from the worst. Lots of events involving new as well as recurring characters, while deeper insights into the situation and into characters' lives are revealed. Looking forward to the third part!

Even better than first one...

It just gets better!

Absolutely brilliant. Even more thrilling than the first book. Can't wait for the next one.

Waiting to listen to the third book

Again I'm holding fire on reviewing this trilogy until I've heard all three books. I'll just say that I find the concepts fascinating and the settings refreshingly non-eurocentric. The narration is perfect and while I'm no judge of accents, especially those drawn from different parts of the African continent, they work for me in separating out the multitude of characters and giving them life. It's sci-fi, it's fantasy, it's near future, it isn't whizz-bang space heroes with tech coming out of their ears and that's also refreshing.

Rosewater is a fabulous and fascinating series with a great mix of characters, themes and ideas. This series is now part of my all-time favourites, one I will be recommending for years to come. Lots of other great reviews to read, and I wanted to avoid spoilers. Although I initially found the time jumps a bit irritating, but there is a reason for them, overall I thoroughly enjoyed book 1 and the whole series.
Wonderful narration. Initially I was apprehensive about the slow and measured narration approach, but that was quickly proven to be not an issue. Lots of different characters are easy to recognise due to the diverse range of voices used to help differentiate and personalise them. The different characters come across brilliantly, distinct from each other, fabulous voice acting.

A brilliant middle chapter book equal to the first

A book filled with brilliant observations on African culture and history crossed with the burden of being the frontline between Earth an benign alien invasion. Hilarious, moving and keenly observed. Highly recommended

Ohhhh now we are talking

this takes the Rosewater universe and just blows the whole thing wide open, completely spellbinding, I couldn't believe it was finished already 😳

I've really enjoyed this trilogy so far. Interesting characters! Multi-stranded story and well narrated. Looking forward to the final one.

Spectacular in any genre

I absolutely love this series and Book 2 is even better. Faster paced, more character evolution and incredible momentum makes this my favourite book of 2019 so far.

Aminat is really amazing in this book, she carries the story. Lots of action, lots of alien weirdness, and generally just very clever storytelling.

The Best in the Trilogy

Engrossing science fiction with the story based in Nigeria. Irreverent, funny, and uniquely Nigerian, and African. The world changes yet some things remain the same.