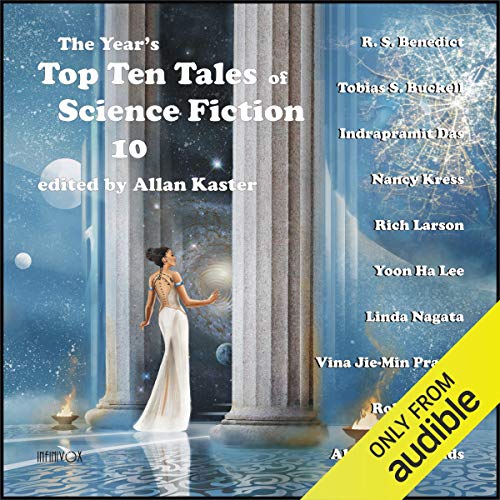 An unabridged audio collection spotlighting the “best of the best” science fiction stories published in 2017 by current and emerging masters of the genre, edited by Allan Kaster, as narrated by top voice talents.

In “My English Name”, by R. S. Benedict, an intelligent alien, who parasitizes an English teacher in China, falls in love. After a victorious space battle, an indentured robot finds a refugee who makes an offer it can’t refuse in “Zen and the Art of Starship Maintenance”, by Tobias S. Buckell. In “The Moon Is Not a Battlefield”, by Indrapramit Das, an Indian soldier retires on Earth after spending most of her life on the moon. A young woman joins the US Army to fight terrorists after aliens arrive on Earth bearing tech gifts unevenly dispersed to humans in “Dear Sarah”, by Nancy Kress.

In “An Evening with Severyn Grimes”, by Rich Larson, a gifted hacker uses cyberspace to extract payback on the rich businessman who put her in prison. Set in the author’s hexarchate universe, an ex-Kel super soldier is enlisted to retrieve a weapon of mass destruction stolen by a rogue general in “The Chameleon’s Gloves”, by Yoon Ha Lee. In “The Martian Obelisk”, by Linda Nagata, on a dying Earth, an architect remotely building a monument to mankind on Mars receives a message from an abandoned Mars colony. A petty meat counterfeiter is blackmailed into forging T-bone steaks for an anonymous thug in “A Series of Steaks”, by Vina Jie-Min Prasad.

In “The Residue of Fire”, by Robert Reed, a torturer tries to cope with one of his alien victims who witnessed a pivotal moment in the lives of two immortals, in this Great Ship tale. And finally, in this Revelation Space tale, a starship captain wakes from hibernation with her ship stalled next to an alien artifact and a mutiny in progress in “Night Passage”, by Alastair Reynolds.

These were the ten BEST, really?

The narrators were fine but the stories were just lame. Some of them made no sense. Most of them were boring and not especially well written. Maybe my bar is set too high but when I read science fiction, I’m looking for interesting and imaginative ideas. I didn’t see much of either here. Several stories were very confusing and I discovered that they are instalments in various series—if you are familiar with the Great Ship stories, the Revelation Space tales or Yoon Ha Lee’s hexarchate universe, you’re all set. Otherwise, you might want to study up before selecting this audiobook. “My English Name” initially seemed to hold some promise but ultimately went no where and revealed nothing. The rest felt formulaic and stale. The narrators were pretty good but the authors really phoned these stories in.