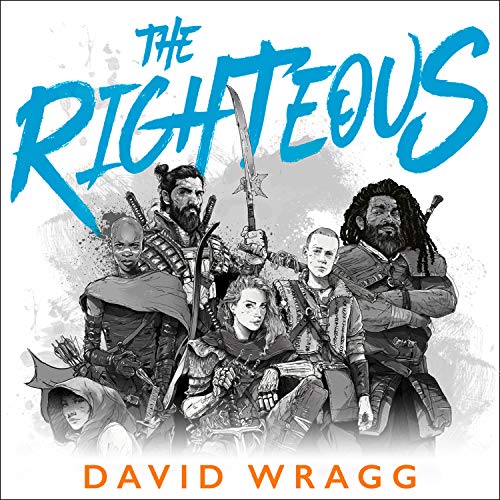 Rejoin fantasy’s most deadly and dysfunctional mercenaries in the sequel to debut sensation The Black Hawks.

Bound by oath and honour, Vedren Chel found himself drawn to the heart of a deadly rebellion. With him stood the mercenaries of the Black Hawk Company, who were only ever in it for the money.

But the uprising failed. Now, Chel and the sell-sword Rennic languish in prison, watching as their comrades are taken one by one for execution.

A daring escape will set them free, but with the combined forces of vengeful church and voracious crown arrayed against them, Chel and the Black Hawks must embark on a desperate search for new allies.

Journeying from frozen wastes to towering cities, from drug-riddled fleapits to opulent palaces, The Righteous is the thrilling and riotous second adventure from one of fantasy’s most exciting new voices.

"Reminds me of Abercrombie’s The Blade Itself." (Nicholas Eames, author of Kings of the Wyld)

"Wragg captures the classic fantasy spirit of adventure and exploration, wraps it with stabbed backs and cannibals and gifts it to you on a bed of action." (Ed McDonald, author of Blackwing)

What listeners say about The Righteous

loved both books ,excellent story great narration .Wish would be a book3 but nicely rounded up if not

This is a really good second book following the Black Hawks next adventure. The characters are so varying and as always Colin Mace cements these characters with his narrative tones,accents & with feeling.
(I did get a smidge lost/confused at one bit - not sure why, but it all made perfect sense eventually & it’s easy to replay as necessary).
Enjoy.

I'll keep this short and simple, this book was everything I wanted and more from a sequel to the stellar 'The Black Hawks'. Great story, great characters and a good conclusion to the duology.

Colin Mace yet again exceeds all expectations with his outstanding narration, giving life and personality to each character with an impressive range of accents and tones, cementing him as one of the best audiobook narrators I've ever had the pleasure of listening to.

I think Colin Mace is a fantastic narrator. The story here is good. The narration ultimately (for me) makes it a fun listen. Both books are worth a shot.