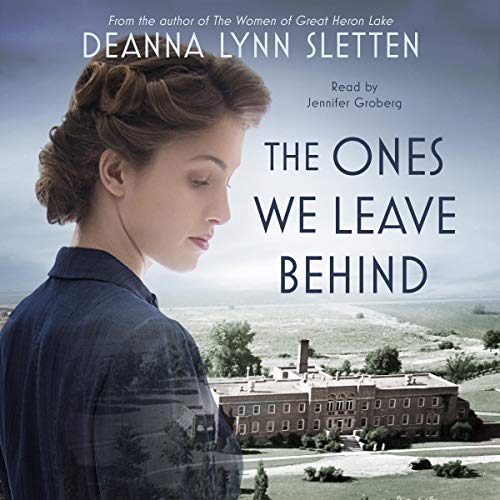 The Ones We Leave Behind

By: Deanna Lynn Sletten
Narrated by: Jennifer Groberg
Try for £0.00

Diane picked up her mother’s phone. “How do you feel about your mother being let out of prison today after 65 years?” the reporter asked. Diane stared at her mother. “My grandmother is alive?” That one phone call hurled shock waves throughout the entire family.

1955 - Anna Bergman Craine’s life changes in an instant when she commits a crime of passion and is sentenced to life in prison. Leaving behind two young children, she is left alone in the world, never to hear from family or friends again. Decades later, she is set free and finds she has a family that has chosen to forget her. What caused this beautiful, intelligent, young woman to commit such a drastic deed that would pull her away from everyone she loved.

2020 - Diane Martin is shocked to learn that not only is her maternal grandmother alive, but she’s just been released after decades in prison. Against her aging mother’s wishes, she visits the older woman and soon hears a tale of the events that led up to that tragic day in 1955. Diane realizes that her own life has mirrored that of her grandmother’s and, had circumstances gone differently that fateful day, she might have experienced the same fate.

A heart-wrenching story of a family torn apart because of a moment in time and trying to put the pieces back together after being separated for decades.

What listeners say about The Ones We Leave Behind

The Ones We Leave Behind

This was a very good book. it took a few chapters before getting used to the narrator but then she was able to bring the characters to life in such a beautiful portrayal. I am so glad I listened.

Is this a computer generated voice?

I think I might enjoy the story, but the reader seems to be a computer voice. It’s a struggle.

I thoroughly enjoyed this book. I didn’t have any problem with the narrator as some have said. It was tragic and beautiful at the same time. I wonder if it was based on a real life experience because it was so moving. There is a saying: “ Only God can turn a mess into a message, a test into a testimony, a trial into a triumph, and a victim into a victory.” This could be the theme of this book. I highly recommend it.

This narrator sounds like a computer. No natural flow, at all. I won't ever listen to another one that Jennifer Groberg reads. She sounds so fake and enunciates each syllable to the extreme. TERRIBLE. The story is good, though. I switched to a physical copy of the book and it was better.

The only hesitation I have for not giving this recording 5 stars in all
categories is the narration. I felt like I was listening to a teacher of young children reading to her class. It words were enunciated so perfectly, that it took away from the emotion. No one speaks that way.

A fine story line and worth the time.

This was very different from my usual book choices but I enjoyed it. The story was sad but with some happiness and closure.
The best thing about this book was the light it shined on women who suffer from domestic violence in silence and those who are forced to take extreme measures to protect themselves and their children.

I had to quit and i rarely do that.

First, the narration is horrible. When reading what a character is speaking the tone snd inflection is so fake and robotic. No one speaks like that....especially not low income Minnesotans in the early to mid 1900s. An 11 year old that didnt attend school does not speak in proper English avoiding the use of contractions. Just not how it was so it made the characters unbelievable.

Also, the writer used too many adjectives as though she was writing an English paper and needed to increase her word count. Example.....why would you describe the kitchen floor as "wood laminate floor"? Its just unnecessary words that lend absolutely nothing to the story. And, she uses catch phrases or predictable phrases that are outdated and worn. Like she is trying to be clever with her words but everyone's heard it 500 times so its no longer clever but simply predictable.

The characters were not believable and do not resemble Minnesotans i grew up with in the least. The author tried to impose modern ideas on a century old society.....a dad did not work in Minneapolis during the week and commute to Walker MN on weekends to see his family......thats not how it was.

Not my favorite book.

Story was sad. Did not care for the narrator. A little predictable. Would not recommend.

I love historical material so I was hooked . Thoroughly enjoyed it. Loved the ending