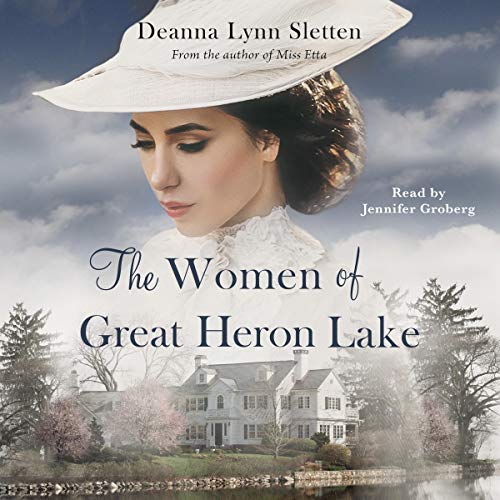 The Women of Great Heron Lake

By: Deanna Lynn Sletten
Narrated by: Jennifer Groberg
Try for £0.00

When Marla Madison’s husband dies, she realizes her life has become very small. Her daughter is grown and Marla has spent the past two decades focused on his friends, his interests, and his home. Feeling lost, she throws herself into fixing up the 150-year-old family manor on the lake. She soon discovers an old journal in a secret drawer and is instantly intrigued. The handwritten book tells the tale of another Mrs. Madison from over a century ago, the first woman to live in the lake manor. As Marla reads the journal, she discovers that her life parallels that of the woman who wrote those words decades ago and Marla finds inspiration from her strength.

1875 - Alaina Carlton was content to become a spinster until her beloved father introduces her to Nathaniel Madison, one of the most prosperous men in St. Paul, Minnesota. Even though she values her independence, Alaina is intrigued by this man who pursues her. When they marry, she believes she’s found a man who will treat her as an equal, but soon realizes that isn’t entirely true. From their mansion on the illustrious Summit Avenue to their manor at Great Heron Lake, where the rich and powerful play, her life is no longer her own. But 15 years and two children later when Nathaniel grows ill, she takes her rightful place where women weren’t allowed in order to secure her children’s inheritance and her future.

An inspiring family saga of two determined woman who found meaning in their lives by following their passions and not allowing society, or propriety, to hold them back.

What listeners say about The Women of Great Heron Lake

This was a good story but the narration was so distracting. In many places it sounded computerized and almost made me quit listening. There were also mixups with words or names in a couple of places.

This was a great story however I almost did not keep the book as the narrator voice was a little stilted and sometimes even sounded like a automated voice...perfect diction (no arguments about that), almost syncopated pace at times...but I kept pushing through and really enjoyed the story itself.

Great listen! Was a little slow to start but then I was hooked. The narrator was amazing!

Narration was not well done. Lacked emotion. Poor change from one character to the next. Male voice was not spoken well.

Narration was too robotic. Good story though.

Terrible narration, good story. I enjoyed it if I ignored narration. Overall not bad story.

Just don't do it. The story is as saccharine sickly as the narrator is incompetent. 14 year old Mormon girls could do better than either the author or voice actor.

Only think that would have made it a little better is a narrator with a bit lower pitched voice. Still a great listen!

Story starts off a bit slow and sometimes painfully detailed, with certain things being much too coincidental to be realistic to me, but ends up relatively interesting with a great message.

After reading and loving Miss Etta, I had assumed Deanna wouldn’t be able to craft as compelling a tale again. I decided to give The Women of Great Heron Lake a shot, and at first, thought it was going to be a sweet story about female friends. It soon became an intricately plotted novel that spanned generations, with plenty of emotional depth. It reminded me of Charles Dickens' Bleak House. I absolutely loved it and am buying a paperback copy to give to my aunt for Christmas.