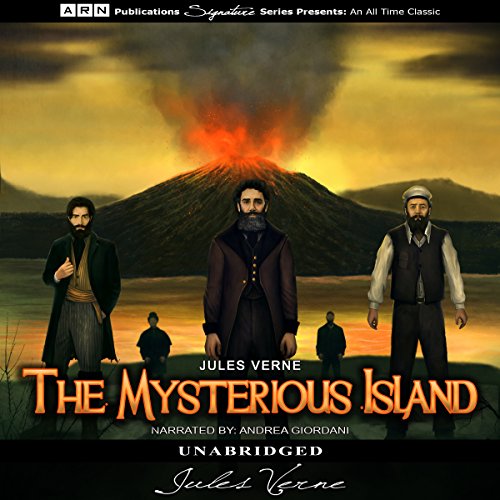 Jules Verne's The Mysterious Island is an epic adventure story that takes place during the American Civil War era. As a sequel to Twenty Thousand Leagues Under the Sea, the novel beings with a group of characters who must band together to survive after they escape imprisonment during the war by stealing a giant air balloon. As fate would have it, they get lost in a storm and crash land on an unknown island somewhere around New Zealand. The group uses the engineering skills of one of the members, Cyrus, in order to survive on the volcanic island. However, they are assisted by an unknown stranger throughout their stay whom supplies the group with a tool box, medicine (when one of the members falls ill), and a message in a bottle that asks the adventurers to rescue a man on a nearby island.

With action-packed fighting, pirates, drama, and twists and turns, Verne's novel does a great job of showing the true adventuresome spirit, which Verne is well known for. The group eventually discovers the island's connection to the great Captain Nemo, and the story concludes with Captain Nemo's death and the group's return to the United States with one final gift from the great captain.

What listeners say about The Mysterious Island

Read by a computer

Terrible reading of a great story - I can only presume it was read by a computer - fell like asking for my money back!

Why a summary at the start?

Awfully complete summary description at the start. A total reveal of entire story. And the narrator has significant issues with homonyms. Doesn’t differentiate between coral and corral. Just one example of many. Her exotic accent seemed appropriate until the repeated and frequent mispronunciations

The story is great! The performance is bad.

The performance left alot to be desired. I found myself turning the volume down because the way the reader pronounces an S sound.

Ms. Giordani isn't a native English speaker. She mispronounces many words, which makes it very distracting. Southern is pronounced south-rn; wound (injury) is wound (like a ball of yarn); corral is coral.

Mysterious Island is a wonderful book. Pick a different narration.